Hank Wood and the Hammerheads Interview 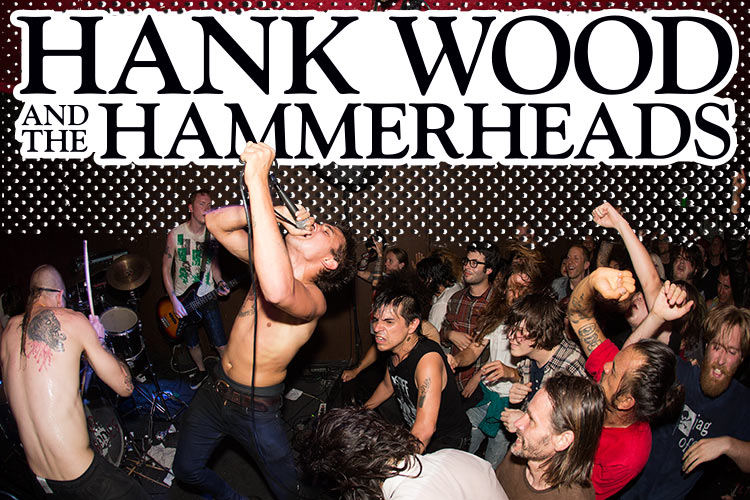 Cowbells, keyboards and ‘tude. Hank Wood and the Hammerheads broke the mold with their first album Go Home! and after a short hiatus followed it up with Stay Home! Both albums rip and are some of the best, new original shit to come out in a while. The guys took a minute to talk about city living, their music and Internet haters. If you can’t appreciate how good their music is, go the fuck home. —Jordan Joseffer

This is your guys’ first time playing California. What brings you guys out here?
Logan (Guitar): We’re here to play a benefit for the Sam Vincent Foundation. Sam was a good friend to many people, who unfortunately, we lost way to soon. We're excited to do another benefit show in Oakland in addition to the ones we've done back in New York, and we're even more excited to see the foundation grow with each passing year. The foundation gets inner-city youth into culinary-career training.

There’s been tons of rad shit coming out of New York lately. How would you describe the current scene out there?
Hank (Vocals): It’s all cool ‘cause most of us all grew up together in the city, and there wasn’t really anything going on when we were all coming up. So we kind of put this together, and now it’s blowing up like crazy. I don’t know if that’s necessarily a good thing or a bad thing.
Emil (Percussions): All of the main bands from the scene that are being talked about now are, like, all the same members, too. So it’s like a really small knit circuit that’s surrounded by newer bands that are being influenced by these current styles—whatever they happen to be.
H: It’s a very, very tight-knit group of friends that kind of do everything—then masses of spectators.
L: It’s been the same people, and we’ve been doing it for a while. It’s not like we just started doing this. We grew up together playing in bad bands that didn’t do anything. We’ve been doing this together, and now it’s just at the point that we can put stuff out that’s not bad. We’re a little older so we know what to do.

Do you guys like New York? It seems like you hate it in some songs.
H: It’s a nightmare. It’s a horrible place. It’s insanely expensive. It’s not worth living there.
L: Twenty-four-hour beer. You can get anything you want when you want it.
H: Yeah, you can get a sandwich 24 hours, which is cool.
L: I just can’t imagine living anywhere else. Never bored.
H: For us, we all live there. We have ties and obligations to the city, so we’re stuck there. But what always kind of stupefies me is people keep moving there. I can’t imagine why anybody would move to New York. It’s not nice. You pay up the wazoo to live in a little tiny shithole in the middle of nowhere. It’s romantic to a lot of people. I guess New York City will always be romantic to move to, but it’s fuckin’ completely retarded.

What makes you mad?
All: New York!

Who’s the most overrated punk band?
L: Us.

Go Home! came out in 2012, but it seems like it took a couple years before it started gaining recognition.
H: We kind of don’t have very much going as far as promotion or distribution.
L: There’s only so much ‘cause we print these records ourselves, and every release pays for the next one and the next re-issue. So it takes a little bit of time. We can only crank so many out at a time.
E: Yo, shout out to Alex Heir and John at Toxic State who put together so much of this shit and helped do all of the handmade shit.

So now you got Stay Home! out right now. I just listened to it this morning and it’s fuckin’ sick.
Max (Drums): Out right fuckin’ now—as we speak.
H: It’s funny you say that, because Go Home! isn’t really getting big out here ’til now, and to me this new record is light years ahead. As far as development of music, writing and all of us coming together.
L: Not to say that the first one was effortless and we shat it out.
E: This is light years more work. Everyone brought something really specific to the table and worked together in a really intimate way for a long-ass time.
Kevin (Bass): I think that kind of came out from us not playing for a bit. Then people started showing up.
M: It was really easy to break up right when Go Home! came out. Then a couple months later, people were like, “Are you stupid? Why are you not playing anymore?”
L: It wasn’t a marketing scheme. It wasn’t a fake break up.
H: It is a sick marketing scheme. It wasn’t purposeful, but if you want to have really big shows where people come out and are really excited, just keep telling them it’s the last one.

There a lot of talk of ghosts on the new record. Have you had paranormal experiences?
H: I actually can’t go into that right now.
L: It’s slang.

Your album art is graffiti art. Are you guys taggers?
L: Our manager is. He does all of the artwork.
Hueso (Manager): Yeah, yeah. They put me on and wanted me to do it, and like everything I do it’s, like, illegal. Ah, shit. I don’t know what to say.
H: The point is: we all grew up in the city surrounded by graffiti. It’s also about being stuck in this nightmare entrapment. It’s a metaphor for life. Graffiti is important to us for how we see New York.
L: When you grow up walking to school and seeing the same tags for 20 years, it kind of gets stuck in your brain.
Hueso: It’s a New York thing and we’re fuckin’ New Yorkers.

The lie, cheat and steal ethos comes through on the album. If you were a mentor, what advice would you give to a ten-year-old?
All: Stay home!
H: Be you; do your fuckin’ thing. Don’t bite anybody else. Don’t worry about what anybody else is doing. Don’t be in a fuckin’ raw punk band. If you want to be in a cool band, don’t try to sound like another band.
L: Start a band, not a project.

There’s a little controversy with you guys. A lot people are mad at you guys on the Internet, but has anybody confronted you guys face to face?
H: Yeah, you right now. That’s it. I don’t have a computer. I don’t have any Internet. It’s funny to me because people talk shit but I don’t even hear it. Nobody says anything to me, so I don’t even know that I did anything wrong or that anyone is upset about it. I don’t even know what you’re talking about.
Hueso: Tell the Internet to come through, man. We’ll take care of them.

Do you have any messages for Internet people who are upset?
H: Come see me.