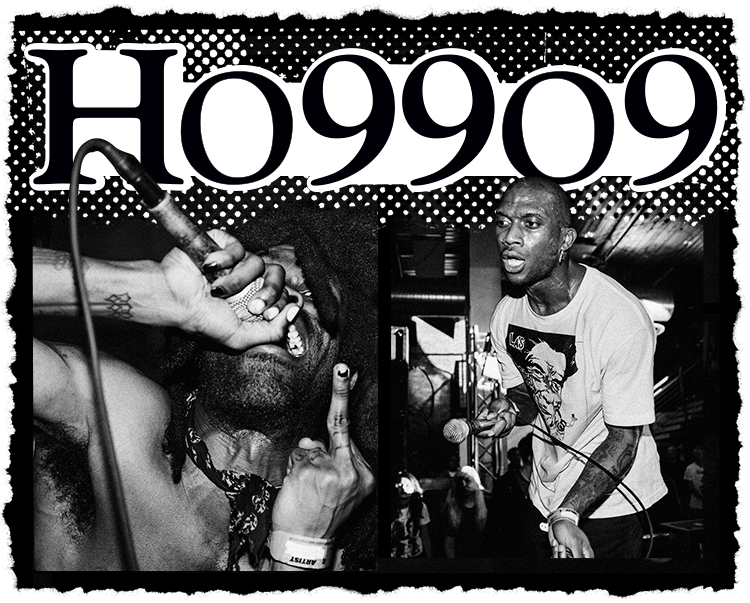 I just saw Ho99o9 (pronounced horror) for the first time down in Austin, Texas, which is kinda random because they’ve been wreaking havoc all over Los Angeles for the last year. Originally from New Jersey, these guys look and sound like a psychotic mix of old school hardcore punk and hip-hop. But not like b-boy fresh hip-hop, more like worst-nightmare brutal noisy aggro street shit. On this particular night, TheOGM was wearing nothing but a tutu and murderer’s mask and Eaddy was wearing a Wasted Youth Reagan’s In shirt. Other photos people had shown me had them painted blue or naked and swinging from the ceilings. They’re a trip and it makes you wonder if you’ll ever be able to watch someone fiddle with a foot pedal again. They’re touring the world this year playing festivals across Europe so look out or one of ‘em might land on your head. Interview by Josh Landau | Photos by Olivia Jaffe

Why did you guys relocate to Los Angeles?
For the better of the freaks, more opportunity and less fuckery, leap of faith in the cult, new scenery with more head space to focus on horror and animation plus the almighty 3 Ws: weather, women and weed.

How long have you known each other?
Since about 2008 or ‘09 through mutual friends from high school.

What’s happening in LA now?
Music is getting created, tacos are getting ate and the uproar for the future is boiling, preparing for domination this year with a lot of unique and left-field material apart from your traditional style and everyday music you hear today.

Describe the Ho99o9 sound. What ingredients did you throw in the blender?
Experimental, not happy nor trendy/cool, very abrasive, sickening, hard to digest, loud, fast, heavy, a lot of tempo changes and high energy and last but not least—fun! Makes you want to move. It’s a shape-shifting hybrid of raw power. It all comes from a mix of aggressive hip-hop, punk, noise, horrorcore, thrash and metal.

I heard you guys played the Afropunk Festival. How did that go?
We played it two times. First time unannounced. We wanted to play and they started making people vote for bands they wanted to see play. Contest type shit. We were a new band who no one knew of, so we couldn’t make the votes, obviously. So they let us rent out a merch booth, really good location near one of the stages. We gathered up some friends who we knew had brands. We had them come sell shit and we brought all our music gear. Had our homie Ezrakh DJing in the tent and we waited for a good time and we unleashed the beast on a crowd who totally wasn’t expecting to see a show out of a merch booth. And the second time, officially, we still rented the tent. This time we just brought bigger speakers and played music really loud! Safe to say we smashed it in a crushing horror format. We’d love to play sometime soon in the near future so we can fuck shit up.

What’s up with the photo of you guys and Die Antwoord and Tony Hawk?
Die Antwoord had invited us to come kick it at Hard Fest and see the show. While we’re side stage checking the show out—BOOM. Jack Black pops up. Met him already. Das my nigga. Look off stage to the right—BOOM. This bangin’ chick with the fattest ass. I’ll never forget. Okay, so I look left. “Holy fuck! Is that—? Nah. That’s Tony Hawk!” Pure shock. He had disappeared before Die Antwoord went off. Our luck was shot. We never gonna meet Tony Hawk. Then suddenly he appears backstage to big up Ninja on the show. Asking for a picture felt like asking your high school crush out to prom, but Ninja introduced us then we took the epic pic.

Who would you love to collaborate with on a track?
Ol’ Dirty Bastard and Onyx.

What’s being naked on stage like?
It’s wonderful. A huge adrenaline rush. All eyes on you. The main attraction in the room. I never plan on getting naked. It’s a spontaneous thing that happens depending on the venue, place, crowd and vibe. It’s always at the last song too. Split decision.

You must have some good stories arguing with venue owners or show promoters after you guys wrecked the place. Gimme one.
Actually we don’t. I can honestly say that 98 percent of the promoters genuinely love the whole show and performance as well as the place getting a bit dismantled. Only situation we had with a promoter post show is the Warped Tour kickoff show at  Club Nokia. Not only did we wreck the place but we got kicked off. Why? Because Warped Tour sucks dick.

If you could pick one sponsor for touring, to make it easier, what would it be?
Thrasher!