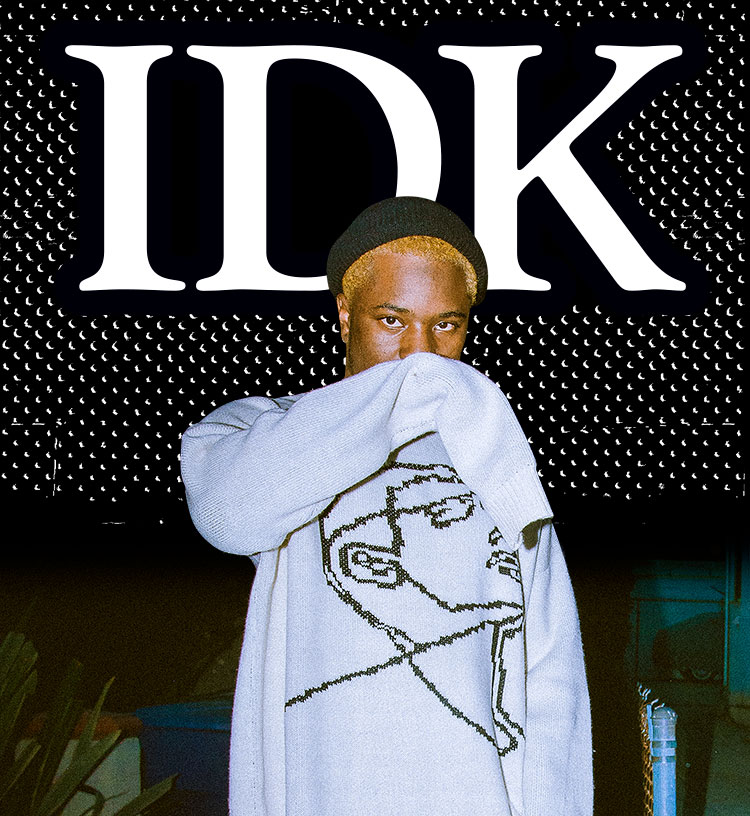 Maryland-based rapper IDK (also known as Jay IDK or—if you want to get formal—Jason Mills) is packing for his trip to Paris. Since putting out IWASVERYBAD, his debut studio album with Adult Swim, his life has been a whirlwind of press and performances. Looking at the cover art, the image he chose tells a story. It shows the back of IDK dressed in an orange prison uniform with a white dove on his shoulder, which is meant to represent his mother who passed away in 2016. During the making of the 12-track project IDK worked through his demons using his music as a form of therapy. Thrasher caught up with the 25 year old to discuss how he got Del the Funky Homosapien and DOOM on his album and his passion for the Gorillaz. —Kyle Eustice

I was watching two little kids interview you on YouTube. You seemed really patient. Have you been around kids a lot?
Not really. I have no brothers or sisters. I’m an only child. But I’ve trying to learn how to be patient with kids. They’re cool. I don’t know if it’s ’cause I’m getting older now, but I think kids are cute now. Before it was, like, whatever, they’re kids. But, you know, I don’t know if it’s baby fever starting to come or what.

What’s behind the album’s title IWASVERYBAD?
I just wanted to be simple, straight to the point.  I didn’t want to make people think too much, even though it still kind of makes you think. I wanted it to be self-explanatory, what I was gonna talk about.

Yeah. It makes me think you’re feeling guilty. Is that a period of your life that you kind of had to come to terms with or is that what this record was?
Yeah. It was just me kind of figuring myself out, yu know what I mean? And getting to a point where I knew who I was and wanted to share that with the world.

What does the dove symbolize?
My mother. She passed away about two years ago.

She’s kind of looking over your shoulder.
Yeah, exactly.

I was also really impressed that you worked with DOOM and Del the Funky Homosapien. What went into your decision to work with those guys?
I got into them from the Gorillaz, which is my favorite band. I would love to meet Damon Albarn. Maybe he’ll see this.

That’s how you heard about Del?
Yeah, I was watching a documentary— a Gorillaz documentary—and they spoke about him. From there, I got into his music. I just felt like the second half of “Pizza Shop” felt like the Gorillaz. I originally wanted DOOM, but then I was, like, “It’d be sick to get Del, too.” Then something happened where both of them were gonna come on. I didn’t think I was gonna get DOOM, to be honest.

Yeah, he’s a tough one. Those are more Golden Era artists, so it’s cool you do your research. Do you feel like knowing your history is important?
I feel like it’s very important. That’s the foundation of what we are. If you don’t understand the foundation then your shit can fall apart, you know? It could crumble. It could come falling down and you won’t know what to do. I think that those foundations are what helped me into becoming not just a good artist or a good rapper, but a great artist and rapper.

You were born in London. Were your parents military?
No, my mother just went there. She met my father and she got married really early and had me early. It was just one of them kind of things.

Do you feel like it’s harder to break out being in the Maryland/Washington DC area instead of Los Angeles or New York City?
LA is amazing, especially when you have some clout. DC is cool ’cause it’s home, but there’s not much there. New York is good when your music is done. Everything has its purpose. When you have your music done and it’s time to put it out, New York’s a good spot to be in.

Tell me a little bit about your skateboarding stuff and how you fell in love with it.
I used to watch, I think it was Papa Roach videos or something like that when I was a kid. I would see them skateboarding and then I got into Tony Hawk, and then I liked the video game. There was a demo on my Sega Dreamcast, so I used to play that and that just made me want to actually skate. So, then I went and got a skateboard. My first skateboard was a Spider-Man skateboard from Target. It wasn’t a professional skateboard,  but I rode it and learned how to do little tricks. I messed with it for a little bit, but then I stopped. Then I ended up getting back into it in ninth grade until I hurt myself really bad. I fucking fell. You know like when you’re skating and you hit a pebble? That shit can really, really, really fuck you up. It was bad and I was going down a hill.

What’s your opinion on this wave of rappers glamorizing prescription-drug abuse?
I don’t even do anything. I don’t smoke, drink, none of that. I’ll drink occasionally, but I don’t do none of that.

When you lost your mom, how did you cope with that? You don’t self-medicate, so what did you do?
Man, it was through music and having fans that can relate, so it’s like I feel like I have people that are on my side, too—friends, family, all of that.  It made me appreciate all of those things more.