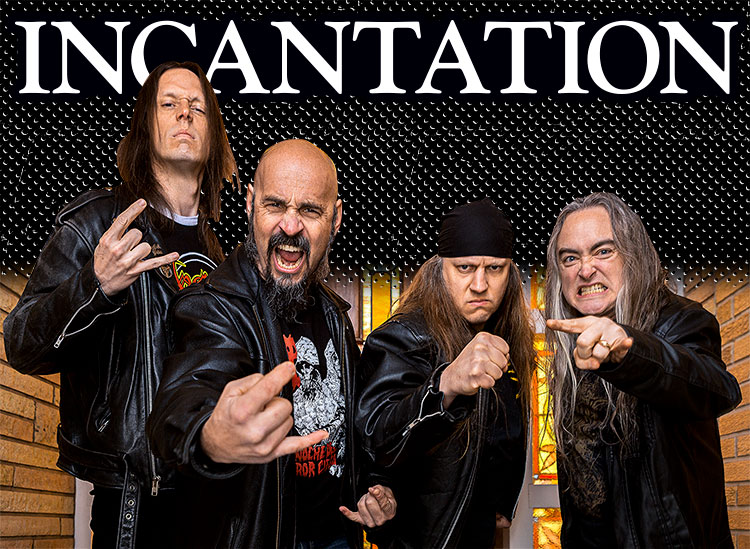 Incantation is no joke. I got a hit list of bands to check off but when the mag comes to me and says, “get Incantation,” I drop the shit on my plate and pursue. And frankly, it’s a no-brainer and a bit overdue considering they are currently celebrating 25 years in the game. Their new LP Profane Nexus is a solidifying monument of the band’s veteran status and influential reign. Incantation’s longtime drummer Kyle Severn took a break from rehearsal to answer my call about their latest work. —Sam Hitz

I’ve been binging on the new album.
I wish we had a copy. We didn’t even get any! You know, I see the layout. We send them the masters, but I haven’t heard the CD. I haven’t even seen it!

That’s classic. You guys just stay in the trenches and make the shit!
Pretty much, man. We’re down here today relearning everything for the upcoming tour. We just started a set about a half hour ago.

What’s the one constant element that’s in all of Incantation’s releases since the beginning?
Wow. It’s really that dark atmospheric feeling. It’s something in John McEntee’s writing; it’s just in his metal blood. He’s got the signature sickness. He’s got a very unorthodox way of playing. It sounds simple until you try and sit down to play it. I just try to flavor it up, you know. The last few years we got contributions from Chuck Sherwood on bass and he’s added a lot.

Are there any elements in Profane Nexus that may not be on any of the other albums?
Yeah. I think because on this one, Sonny Lombardozzi had contributed a lot more. He brought a lot of riffs to the table and of course his lead work. It wasn’t until a few albums back that we even decided to start putting leads in the songs. And I think that brings a whole new element to the band. He’s a hell of a shredder, but it’s got to be tasteful; it’s got to flow with the atmosphere we already have here. It kind of creeps in on you.

Do you think the worlds of religious and political climates are any riper for inspiration now compared to 25 years ago when Incantation started?
Well, the way the world is with all this shit, there’s definitely a hell of a lot more to write about. The band, from the beginning, has always been anti organized religion and I think it was a little more stronger on Christianity. But since Chuck has been in the band the last eight years, he’s a super history buff. He’s been able to research and write about all religions and a little bit more in depth. It’s not just, “fuck this religion” or this or that. He’s telling stories where 99-percent of it is actual events that happened. It makes for a great reading. It’s a pain in the ass for John because some of it is hard words to say or growl. We don’t touch on the political side. That’s not us, especially nowadays.

Are your musical influences the same as they were when you began playing with Incantation?
My go-to is the bands that influenced me on the style of music I play. It’s kind of a bummer we’re not really up on a lot of new bands. There’s so many bands that slip through. I don’t get a chance to check them all out. Of course there were a lot of bands when we were younger that had demos, but it was a little easier to manage. We’re just stuck in our old ways, listening to our old heavy metal, death metal stuff—all of our friends’ bands that were creating this style when Incantation was. All the heavy thrash bands that influenced us in the ’80s and late ’80s that helped create this madness we do now.

What’s the last album you bought?
I actually recently bought Immolation. I put an order in and bought limited color versions of the LP that they have. Those guys still put out some amazing death metal. I did buy—it’s not very new—the Metallica reissue vinyl box set they put out for Kill ‘Em All and Ride the Lightning. That was a treat.

What’s your favorite way to release an album in the long run?
I think it’s important to do both. We had released our 25th anniversary, vinyl edition only, and to our surprise we heard a lot of people kind of bitching, “I don’t collect vinyl. I would really like to see that on CD.” It’s, like, “Nah, you don’t get it.” I think this band is a great vinyl sounding band. There’s a warmth. A lot of people still forget the band goes through so much and spends so much money to make a great sounding song or record And then you go buy an MP3 and it compresses the fuck out of it.

As a drummer, do you try something new from album to album when recording or does it just depend on the studio and making adjustments to your kit?
A little bit of everything. I try to come up with something new. On this record I tried not to over play. I think I actually stuck a little bit more to the beach. I don’t want to say I took a backseat, but I just wanted to be the backbone, you know?

Yeah. Maybe not as busy? But you’re hitting pretty hard! I would describe it as a Clydesdale running on a ground made of drum skins.
And that’s just it. I’m glad to hear it. Incantation is just a locomotive. Kind of steamrolls through sometimes. That’s kind of what I felt on this one. I love the slow mid-pace stuff and lay the thunderous beat behind it. It doesn’t need to be all over the place and shit. I’m not a super technical drummer; I just beat on things. Somehow it’s been working all these years.

Sonically, Profane Nexus is thick as fuck. I found myself going inward wanting to draw abstract imagery in dim lighting compared to wanting to smash shit and go skate. Did incantation have a design to translate a certain mood going into the studio.
Not necessarily. Usually when we write a record we write way too much and then have a problem of picking ten songs out of the 14. Not that they’re bad songs, they just don’t fit on the record. We had a lot of doomy stuff. We cut a lot of it down. It was just too much. We would just get in the sessions and just roll with whatever mood we were in and just hit record on our practices and jams. Then go back and try and build songs out of it. And with Sonny, he brought a lot of the fast thrash and it worked out pretty good. We always try to deliver a little bit of everything.

Any last words to the readers?
I really like the fact that it’s Thrasher magazine. When I was a teenager, this was the magazine. When it came out in the early ’80s I was introduced to a lot of punk bands through it, you know what I mean? Misfits, Suicidal all that good stuff. Glad to see you guys are still doing it.