"Every song we write feels like the best thing we’ve ever done..."

Interview by Whiteley | Photos by French

My first encounter with Interpol was a small black and white photo in SF Weekly. Great, I thought, another hipster band from NYC in suits and funny haircuts, most likely with that ’80s throwback sound that was so popular at the time…I hated them already. But when a super-fine girl invited me to the show, I couldn’t resist. (Funny how those things happen.) Turns out Interpol was exactly what I had been looking for in music—I was hooked. And now two years, four shows, and two albums later, they’re so big I can’t even get an interview with them in person. So here’s guitarist Daniel Kessler on the celly, from the hotel elevator to the dry cleaners to the tour bus.

First board?
My first board was the Neil Blender with the coffee cup. Then I had the Lance Mountain, still wood, before it went Bonite.

Favorite skater back in the day?
I really liked Eric Dressen a lot.

Favorite video?
The Search for Animal Chin was it for us. We rented it once, taped it off the TV with a VHS camera, and would watch it all the time. There’s so many bad lines in there; we would quote them left and right. Maybe not the greatest video, but certainly the most memorable.

I noticed that you drew the Rat Bones logo on your table cloth in some article.
That’s the closest thing to anything artistic that I’ve ever been able to draw. That and the Black Flag logo.

Do you still skate?
No, I haven’t in a really long time. I think I stopped skating when I started playing the guitar.

Always the case.
But the time in my life when I was skating was really special. I was never anything all that amazing, but it was just something I wore on my sleeve, the same way you can recognize people from down the block by what music they like. Skateboarding was about me and my friends. We would travel all over DC and Maryland finding places to skate. That’s what we did every single day.

What bands are you listening to right now?
I just bought the new Q and Not U record. I’m a big Bonnie Prince Billy fan, I like Smog a lot, and I’ve been listening to Blonde Redhead a lot. I’ve also been going back to Fugazi’s In on the Killtaker quite a bit. This band Calla from New York just gave me a bunch of new demos that are really good. Coco Rosie, also from New York, have an EP that I really love. 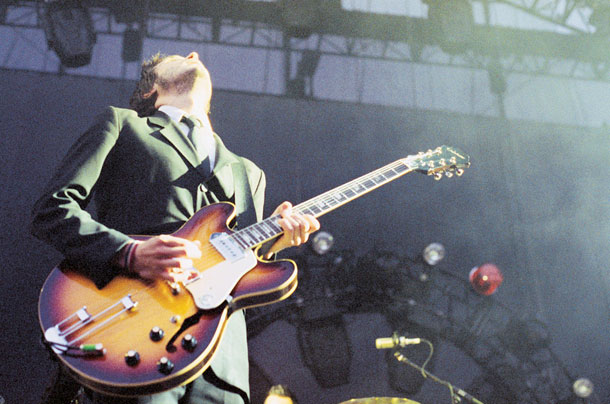 What musicians have you been able to meet as a result of your success? Any big heroes?
Well, it’s not like all of a sudden we got this little card in the mail that says now we can go to this function or that function. We did this KROQ event two years ago, and they had a lot of old bands from the past playing with a bunch of new bands. I was a huge English Beat fan in high school, and our radio person, who has known Dave Wakeling for a long time, got him to sing “End of the Party” a cappella to us, right there in the parking lot.

So your band is pretty huge now.
Uh…I don’t think we’ve ever looked at it like that, as much as things have just become busier and more comfortable. It was all so organic and gradual. We never had a big radio hit or wanted to be “band of the moment.” We just wanted to put out a record on a label that we really respected, among bands who are our favorites. That’s what happened, and then just gradually, tour after tour, the venues got a little bigger, and things just kind of grew. We climbed every step gradually, which makes it feel very normal. Being in a band is about making records that are meaningful to us, that feel like Interpol, four individuals growing where we want to grow. And that’s what happened with the latest, Antics.

How was recording Antics different from the first album?
In a lot of ways it wasn’t. We wrote the songs very much in the same way we’ve always written them, in the same unpleasant rehearsal room that we’ve been in for the past four years. However, when we wrote Turn on the Bright Lights, the goal was to make it sound like we were playing live. There was more of a general production to the songs, and Paul’s voice sounded the same throughout the whole thing. On Antics, we had two years of experience touring so we were able to home in more on details. Each song was attended to a little bit more and has its own personality. That’s why there’s no one song that anchors an Interpol record; you have to listen to the album as a whole. Every song we write feels like the best thing we’ve ever done, and we treat it that way until we get to the next song.

Did you cut any songs from the album?
Not too many. There’s one older song that we re-recorded that will become a B-side, “Song Seven.”

Do you have any future goals for Interpol?
Everything surprises me day by day. I don’t take it for granted in the slightest. This is astounding that I get to do this and make a living on a daily basis. I’m not going to forget that that’s what every band’s dreams are when they first start playing. I don’t think we’ll get to do it for a while, but eventually I think we’d like to do a film score. I love film. I write the most music while watching films. I don’t like to think about writing songs; I like it to kind of seep out. It doesn’t always work, but a lot of times it happens if I’m watching a film.

Is there something else in your life that you wish you had more time for?
Music is really it for me. I go home and I write. I don’t do something completely off the cuff like paint or DJ. I really want to expand my musical palette, so I started taking piano lessons. I realized a long time ago that it’s the thing I enjoy most in life. It moves me in a way like nothing else does. I always want to be writing music.