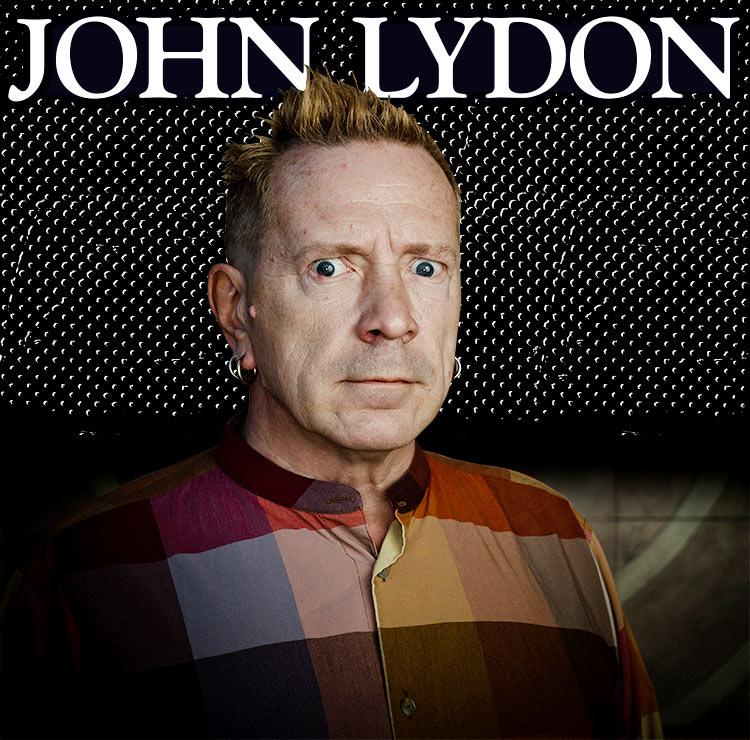 In his thick, inimitable British accent, John Lydon, notoriously known as Johnny Rotten of the Sex Pistols, answers the phone in a surprisingly jovial mood. The 61-year-old punk rock icon is doing interviews in support of his forthcoming book, Mr. Rotten’s Songbook, and delivers one of the most captivating chats in recent memory. In what ended up being a nearly 45-minute discussion, Mr. Rotten covered topics ranging from the height of his Sex Pistols fame, Donald Trump and his near-death experience on Pan Am Flight 103. —Kyle Eustice

You sound happy.
Yes, every day I wake up, I’m happy about that.

Where do you live?
Outside of LA. I’ve been here for 25 to 30 years. Two years back I decided to become an American, so here I am. I was more than happy to pledge allegiance to the flag, but that was before Donald Trump came in. I might be surprised at what being an American means.

I find it interesting the title of your last book is Anger Is Energy, which seems quite relevant today.
Cool, isn’t it? Every day reveals a new reason why. From my heart, I’ve always found CNN,  for instance, to be so boring. Now that they’ve combined up with the best comedian I’ve ever seen, Donald Trump, it’s fantastic fun. I love turning on that TV in the morning and going, “What’s Uncle Donny done now?” The indignation of it—the whole thing—it’s a comedy of errors. I suppose that the best way to approach this modern world and our new president is to see the buffoonery of it. I find a great deal of comfort and fun in that because it’s totally impractical.

It’s interesting though that before nobody really truly cared about politics and now everyone does.
There you go. There’s a sense of fun in that. It has brought everybody into it. I’m pleased by that. It’s ugly enough; politics have become a contact sport.

Who or what got you into music?
Pure luck, really. It was all based around me wearing an “I hate Pink Floyd” t-shirt. I cut the eyes out because that’s where my nipples poked through. I’m sure it had something to do with itchy cotton, but you know, I stood out. I was little different from the norm and I followed no fashion trend of any kind besides me own. That’s what launched my career. They never really bothered to ask me if I had a voice. At that point, I hadn’t even asked myself. I did everything as a child to stay out of the choir. When you sang in the church choir, that meant the priests had more direct access to you. Child molestation at five years old was not going to be a hobby of mine. I wasn’t going to be the receptacle. Until the Pistols, I’d never really sung a song.

Did you know you had any voice at all?
No. In the first week of rehearsal, I had no idea what I sounded like. We got what was called a monitor and when I first heard it, I was horrified.

So you didn’t like the sound of your voice.
It’s like X Factor. You know the rehearsals and people come on and think they’re the worlds greatest singers, and they’re absolutely awful? I have great empathy for those people. I was one of them.

It’s a tough thing to do.
Very much so. It’s a warm feeling of embarrassment.

It’s very intense.
It really is. I have great respect for anybody that stands up and does it. Deep down, we’ve all got those fears. It’s how we wrestle with them and overcome them that’s a making of a human.

At the height of the Sex Pistols’ fame, what was that like for you?
It was hell on earth. It was more like infamy. We were just despised by all authoritative figures and quite rightfully so. I knew what I was writing was absolutely picking and pointing them out as the enemy of mankind. I was dead bang on right about it, so of course I was not going to be fundamentally appreciated by anything called a political system, so to this day my healthy disposition about politics is still there, but I find it very invigorating.

Well, we are still dealing with this. What are your thoughts on drug abuse?
Boo. I’ve watched several people die from heroin so I have a very downward opinion of that and I know a lot of people who took heroin did so to cover up self-doubt.

Do you think that’s what your bandmate Sid Vicious did?
Yeah, I do.

That must have been tough.
It’s hard. You don’t realize the fool you’re making of yourself. You may be using a chemical substitute to hide your weaknesses, but you’re only compounding the issue. Sooner or later, you’re going to have to come to grips with yourself.

I’m saddened that some people never get it. Opiate use seems to be seeing a resurgence.
It’s almost institutionalized, isn’t it? The prescriptions are given so easy. I’ve always been one to say let people determine their own existence, but there’s a point where you don’t need to be edged on, you know? The availability of the drug doesn’t come with an availability of education. You don’t know what it is you’re getting into until you’re into it.

The Pan Am Flight 103 story is amazing. You got lucky by not making that flight. It crashed and everyone died.
All because my wife couldn’t pack a bag in time.

Are you kind of thanking her to this day?
I used to always be a real stickler for time. I loved being on time. If somebody says 8am, I’m there—even five minutes before. I’ve had to erode on that kind of attitude because if we were on time, we’d be dead. I’m now of the mindset, if I want to be late for my own funeral, I will be.