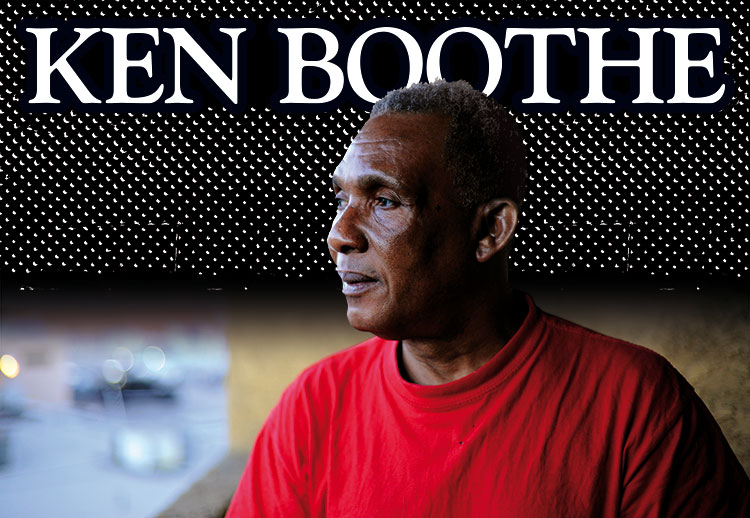 Hailing from the Jamaican ghetto, the soulful-voiced Ken Boothe had to work his way to the top on his own—becoming an absolute legend in Jamaica before conquering England, where he became the living God of the skinhead movement and even saw one of his songs covered by Boy George. I recently caught up with the 70-year old reggae icon at the LA Dub Club to witness the obvious: ain’t nothing stopping Mr. Rock Steady! —Seb Carayol

You come from a rough area called Denham Town in Kingston. Did a lot of famous singers come from there?
The people in this area, they’re not so fortunate. But that’s where it started out, from poor people. They’re not poor in spirit, but poor financially—all because of politics. Fortunately, the next neighborhood over is Trenchtown, where a lot of the singers came from. Me and Stranger Cole, we used to go to Trenchtown almost every day. Everything started in these communal tenement yards, like the production process. That was about 1950, going up into ’55.

When did you first get noticed?
Stranger Cole and I were neighbors, and he was established already with his duo Stranger and Patsy. One night he heard that song I had done, “Uno Dos Tres,” and he told me that I should go see the producer Duke Reid.

That’s the former cop turned producer who used to carry guns at his belt, yes? Were you intimated?
No, he wasn’t intimidating, it was just that when you own a business in these days and place you had to be the security yourself. So he had his gun on the counter, a handgun, and then he had a shotgun also beside him. When he saw me, he said to Stranger, “Why are you bringing this little fat boy? He can’t sing,” and Stranger said to him, “Yes, man, he can sing.” What’s nice about those days is that the producers, when they hear good singing, you don’t have to finish everything, they just know that you can sing and they just say, “Studio!” That’s how I found myself upstairs at his liquor shop—in his studio, Treasure Isle. I waited forever cause he got busy at the shop, but I got ten pounds for the recording. And then one day I was passing a bar and I heard my voice on the jukebox! The song had come out. I didn’t know.

You got famous, though, from another producer, Coxsone Dodd, at Studio One.
Yes, I fell in love with Studio One. He was, like, I always describe it this way—like Motown, it’s standard, real standard and the artists that he recorded were up-standard: Owen Gray, Jackie Edwards, Derrick Morgan. Alton Ellis started out with Duke Reid but even Alton himself went to Sir Coxsone after a while—it was like the American music. It had so much influence on me. All the singers, when I hear them sing, I want to be like them. I wanted to be like Owen Gray. I wanted to be like Jackie Opel or Lascelles Perkins. When we went there, Stranger and I had written two songs, “Artibella” and “Worlds Fair.” It was easy for me; I didn’t get no hard time to go in the studio. Because I’m with Stranger Cole, and he’s already an established artist. When we went to Sir Coxsone, he was ready.

What was your inspiration for “Artibella,” by the way?
If you notice the sound of it, it has a bit of an Indian sound to it. There was a radio program in Jamaica at the time, I think it was called Indian Serenade, something like that. That’s where I took the melody and I done the English part of it, me and Stranger. But Sir Coxsone started me out singing soul music, not ska. But it didn’t do that well because people in Jamaican were starting to identify with ska more. I really got successful once I started to do real reggae and ska and rocksteady tunes—even though through my sister I always had that American soul influence in me. Anyway, after a couple years, we became popular even outside of Jamaica. England is one of the first places out of Jamaica that embraced Jamaican music.

That’s when ska started to morph into rocksteady and became really popular among the skinhead movement in the UK.
You see, ska beat was like running. So they calmed it down, cooled it down and you now had a slower beat and they called it rocksteady. It became dominant with a whole series of hit songs. My first time to England was in 1967. Me and Alton Ellis are the first two artists that traveled out of Jamaica with a band.

You even became so popular in England that later on, pop white singers covered some of your tunes, like Boy George.
Well, he covered my version of that song by David Gates and Bread, “Everything I Own.” His version is nice, too. I love it! But UB40 covered a lot of my songs. It’s a happy feeling to know that your work becomes so popular that other people adopted it. You make money from it, too. Regardless, I love to sing songs that bring people together no matter what color you are. That’s what we need in this world right now.

Why did violence become so prevalent in nowadays Jamaican music? It used to be the opposite. It was more, like, “Okay, society is violent but we’re going to uplift people.” Why is that?
I wonder, because we all are ghetto children. Some people get caught up with environment. But I don’t really have the answer for it so much. I don’t know if it’s a generation thing. Then the negative things become so prevalent, like guns and all those things. When I was growing up, police didn’t even carry a gun with them. A police, they carried a baton. But now police, you see a cop on the street and they have three, four guns.