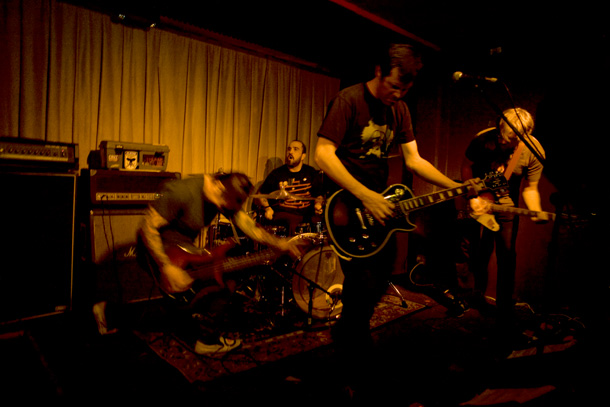 Posted: March 18th, 2009
"Just fucking bounds of unfettered creativity pouring out of us."

Channeling dark forces of Unsanity, indulging in fits of Neurosis under a Black Flag, Kowloon Walled City is heaviness. The piercing sludge they churn is not of lesser evils; rather, they find means for revelry amidst the overpopulated ’crete towers and blight which surrounds the hideout where their music is born. Thirty-thousand people living on seven acres?  It sounds exactly like that.

Name, rank, job, why you’re here.
I’m Jason Pace, I play guitar and drink  Tecate. Scott Evans is the guitar in your other speaker, the screaming, and our fearless leader. Jeff Fagundes plays drums really fucking loud. Ian Miller plays bass and continuously  acquires new gear. We’re here because we like masochistic, extravagant hobbies that offer few rewards beyond hearing damage. Scott recorded the band Ian and I were in previously, then snatched us up when it dissolved.

What the hell is a Kowloon Walled City?
Scott and Ian heard about it on some Internet geek forum and latched onto its awesomeness. It was an enclave in British Hong Kong unclaimed by both the Chinese and the British. It went through several stages, first being a fort, torn down by the Japanese in WWII, then a Triad-ruled haven for crime through the ’70s—then just a fucking monolith of sin, squalor, and desperation until it was leveled by the Chinese in 1993. It was this neglected, lawless place, and at its peak had well over 30,000 people living on seven acres. Many or most of the residents were families, immigrants, and dissidents—those left behind. It developed its own economy, all under the table. You need an unlicensed dentist? Check. Some cocaine? You got it. Dog meat and a hooker (not necessarily at the same time, though I do recommend it)? Yours. Pretty metal.

The new record’s called Turk Street.  Turk runs through SF’s Tenderloin neighborhood, which is where you guys practice. Any similarities between that part of town and the real KWC?
Well, it’s a good comparison to draw as far as the squalor, prostitution, and drugs factor (although the locals favor crack and heroin to opium). You can’t walk through that part of Turk Street without having a transgender prostitute urinate a syringe onto your leg. Actually, it’s more like “Hamsterdam” in the HBO show The Wire. The city shovels a lot of desperate people into a few blocks and lets them fester. It’s a containment thing. If you walk two blocks, you’re at a classy tourist hotel (we ghetto-ize our tourists as well, like any good city). In front of our practice space are usually about 20 people standing around, smoking crack, fixing, whatever. When a cop drives by everyone scatters, and then the cop busts one of us for jaywalking. It’s a pretty fucked up, consciously neglected part of town. The unfortunate part is you also see families walking around there—statistically, the TL has the largest population of children in SF. Fucked.

Vinyl? And the label’s called Wordclock? Genius. What prompted the decision to press vinyl in today’s musical climate?
Today’s musical climate is the very thing that prompted the vinyl. That and we like things that look cool. We noticed lots of bands we like pressing bad-ass, short runs of vinyl and including the CD with it—Torche, Baroness… We couldn’t afford a monster gatefold with CD die cuts or anything, but I think ours looks fantastic—Eric Anderson, the guy who designed it, did a bang-up job. So basically we’re giving away MP3s for free, selling hand-screened CDs if you want ’em, and then we’ve got the killer vinyl. It’s a strange, kind of cool time to be in a band, when music is essentially free—people just download it. For example, everyone’s heard the new Gojira, and it’s not due for another month (and I notice they have 180-gram gatefold purple vinyl available for pre-order). Nobody makes money making rock music. That’s fine. We’re waiting for a spot in some shitty horror movie soundtrack for the beer money jackpot. Saw XV, are you listening?

Just what is a wordclock?
Digital audio is broken down into little slices—samples. On a CD there are 44,100 of these per second. When you mix two digital signals, you need the samples to happen in sync, or everything sounds phase-y and fucked up. That’s what a wordclock is for: A master clock signal that all the sources sync to, to prevent digital fuckery like jitter. Which we’ve found is good for Ian, since he drinks all those crappy energy drinks. You made me cry with your vinyl/digital joke, but digital recording enabled us to get exactly what we wanted in our own rehearsal space, on our own terms. Neve consoles and giant mic collections are nice, but the pressure of spending $1,000 a day? Not so much. Plus, we’re not making Steely Dan records here.

What are they gonna do with the old Bay Bridge once the new one’s finished?
They’ll both be lost in a horrible, massive earthquake, drifting slowly to the bottom of the bay in parallel, like two great gods of the sea, the fire and destruction above barely visible from the quiet depths.

Talk about living with a halfpipe.
Jeff could address this a little better,  since he lives there. But it’s a huge warehouse over in Bayview, across the street from Thrasher. I guess this is a good time to shamefully admit that none of us can skate worth a shit. We’d have about a one-to-one ratio of drop-ins to broken arms. But the warehouse has been a boon to us for silkscreening flyers and stuff. We have all  that ramp space to lay shit out to dry, and you can make a mess. As I type this, though, the future of said warehouse is in jeopardy. Fucking sucks.

Shiny club, the ramp, someone’s kitchen. Which is the preferred venue for KWC?
Playing above the ramp is the best shit ever. You’re up there rocking out while people are tearing it up. It’s good-old fashioned party overload. I gotta say I was jealous when I saw dudes from the other bands just killing it on the halfpipe. I tried to compete by being the best beer drinker I could be.

Professor Adrian North of Heriot-Watt University recently finished a study concluding that musical tastes and personality types are closely related. Here’s his assessment of people who like rock and heavy metal: Low self-esteem, creative, not hard-working, not outgoing, gentle, at ease. Speak to his findings.
North can suck it. We have enough self-esteem—or we’re just of the age where you stop giving a fuck what people think—and all of us work our asses off in most anything we do. I’ll admit to creativity. Just fucking bounds of unfettered creativity pouring out of us.  And gentleness. We make up for our gentle natures in decibels, though. Gentle giants.  ’70s prog references.

Listen to Kowloon Walled City here or check their myspace for upcoming shows.