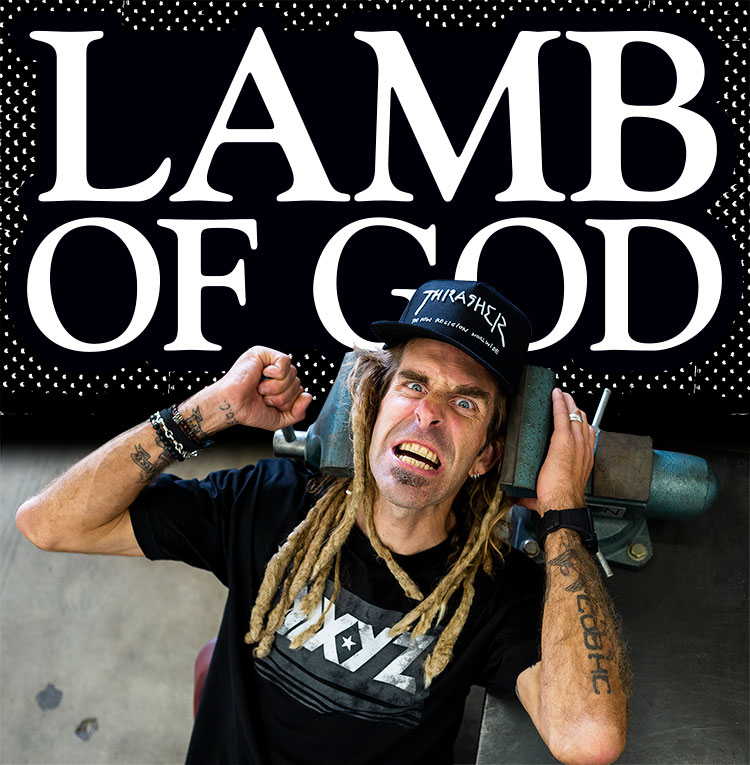 It’s pretty cool when you meet the front man of a massive worldwide touring rock-n-roll juggernaut like Lamb of God and it turns out he’s just a skate freak like the rest of us. With oceans of fans, Lamb of God could say, “Attack,” and a human wall of death would crash though any festival gates and keep going until they said, “Stop.” It’s that nuts. Although that would be awesome, Randy Blythe is pretty humble. He looks out for his people, loves what he does and just wants his fans to know where he’s coming from.  —Sam Hitz

Let’s get right into this. How did Thrasher influence your musical intake as a kid?
Pushead had a column called Pus Zone and he’s connected with his art through the Misfits. And Thrasher also always had a whole section devoted to music in there. But Thrasher put out a series of compilations called Skate Rock and Volume 3: Wild Riders of Boards was hugely influential to me. That really set it off ’cause that’s where I first heard The Accüsed—which my band just covered. I heard Mike Dean era C.O.C., I heard Septic Death—Pushead’s band— I heard Christ on Parade, Slam, The Boneless Ones. It was a really perfect comp, and I play songs from it on my radio show all the time. Particularly those bands brought me into the crossover kind of era when metal and punk mixed the perfect amount of aggression and technicality for skateboarding at that time.

How has Thrasher influenced you as a photographer?
It always seemed to me that the photographs in Thrasher, particularly back in the day, were always going to be up closer, more in your face and showing the chaos of the skate environment, not just like Christian Hosoi doing a beautiful Christ air at Trashmore. Thrasher seemed to be more in peoples faces, like the Zorlac team or something. They showed ’em drinking or it showed more of the lifestyle—not just the pretty skateboarding shots. There was a lot of closeness to the photography. I think Robert Capa said, “If your photos aren’t good enough, you are not close enough,” and he’s the guy who took the photos of the D-Day landing, you know? So there’s a certain grit to the aesthetic. For the lack of a better word, it’s more punk rock.

Do you tour with a skateboard or is it considered a liability because so much money is invested in getting you on stage  in one piece?
I have a cruiser over in the wardrobe case. It’s not really so much me, because I can play with a broken arm or leg, but Willie, our guitar player, has a Powell board that Elliot Sloan gave him that he cruises around on. I more worry about him. I didn’t bring a regular rig to rip on this tour, but yeah, there’s always a skateboard—always. Generally I try to wait until after the tour has been going a little bit because the first few days I’m so fucking sore after our first performances ’cause I jump off shit, headbang and I’m, like, if I skate, too, I’m just going to be broken. But I always have a skateboard. If we’re in Portland I’ll go hit Burnside, you know? I don’t get hurt as much ’cause I’m sober now. I used to drink and think I could skate and that never worked.

Do you trip on the size of crowds you play in front of, like this Slayer tour you’re on? Do you feel tied to arenas and festivals because of the potential amount of fans that may attend?
We’ll play whatever. I’ve been thinking about how we could do a house show again. We’ve talked about it but it would have to be so fuckin’ secret, like, so underground because someone’s home would just be utterly destroyed, you know? Burned down. We play wherever will hold us. But this tour, It’s Slayer’s last run. There’s no way they’re going out playing some theatre. I don’t feel particularly constrained to any particular size of audience, though. If there is one person there I’m going to give it 100 percent.

Do you miss the smaller venues?
Sometimes. Those days are gone. I miss playing CBGB. I miss playing warehouses in Philly. There’s a special energy to that time when it was a really small thing and we were growing and there was really no separation between the band and the audience and it was very much a communal experience.  I miss those times, but it’s not possible for them to exist anymore. It’s different with shows now. One thing I do miss that is different with shows now is I miss people just coming to the show, being in the show, being in the moment with you and enjoying themselves. Not worrying about filming it on their phone. That drives me nuts! And I’m, like, “Put the fuckin’ phone down, man! Cellphone cameras are pretty good but your video is still gonna suck.”

As a Slayer fan how did you feel when you heard they were calling it quits?
I think it’s a little difficult for me to differentiate Slayer the band from Slayer the people who are my friends. And it’s not my place to say you should do this or you should not do that, but I understand why. I mean, those guys have been doing it for 30 some years. They have always been Slayer. They did their first tour in a fuckin’ Camaro, you know?! They did! Tom Araya’s kid brother Johnny is still out there teching for them. Those guys have been doing nothing but Slayer for that long and they are pushing 60. Like, how long can you do that? Allow them to live life a little bit. I’m spoiled, though, ’cause I’ve seen Slayer more times than I can remember because I’ve toured with ’em so many times. But the thing is that Slayer the band will no longer tour, but the records—you can always go to the backyard halfpipe and put Reign in Blood in the boombox and still rip a frontside Smith.

When you throw on “Raining Blood” for a  best-trick contest, it’s like “Let’s go!” It gets turned up. Someone might die!
It’s dangerous to drive a car while listening to Slayer.

It’s dangerous eating a plate of noodles listening to Slayer. Why am I eating so fast? When did you first see them play live?
I saw them for the first time in ’89 or ’90, my freshman year in college. I Saw ’em in Richmond, Virginia, at a place called The Mosque. Testament opened up. The Mosque was a really nice theater and it was seated. It was not a good idea to have Slayer and

Testament play in a really nice seated venue.  I remember a lot of chairs got broken that night.

Is going back to your original moniker, Burn the Priest, and covering songs a way to relive the early days as a band or bring some older bands to the attention of your vast audience?
I think for us it’s two things: It’s us just having some fun, you know? Because our band is a job, despite what people may think. It’s not all hookers, cocaine, limousines and shit—it’s an actual job. It’s how we do it. We’ve been talking about covering theses songs for 18 years. It was just something fun for us and something to give to the fans in the meantime and also a way to show respect to a lot of the bands that influenced us and that’s really important to me. Most of the bands we covered, well over half of them,  I’m friends with those guys which blows my high-school mind. The whole other side to this is to show the younger generation where a lot of the aggression and speed in the modern metal world came from. The metal scene that exists today didn’t pop out of a vacuum. Everything is influenced by things.

That’s honorable. Any closing comments?
Thanks to Thrasher for continuing to put out the best skate magazine for years and years. Do they still put the decorated envelope art in the letters section?

Hell yeah.
There’s some phenomenal art from those people.