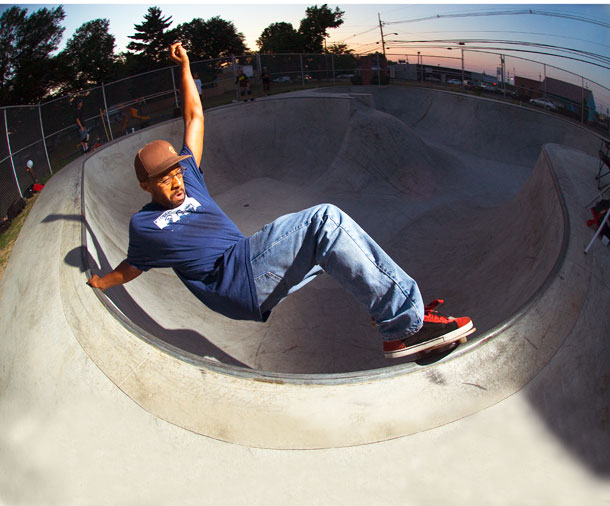 Us old guys with bad knees remember McRad from back in the days when skate videos were events just because they came out, not because some publicist was hyping them with a YouTube ad campaign. The songs heard in those videos were new pieces of ear candy that were soon blasting on a sticker-covered boom box at the local ramp. That was back when  Skate Rock belonged to skaters, and we had the best secret in the world. McRad was one of those secrets.

Chuck Treece was a pro skater, and his  band McRad was in a few of Powell Peralta’s  classic vids—Public Domain, Ban This and Propaganda—bringing an energetic sound based in hardcore and punk to the post-Bones Brigade team. The song “Weakness” was the soundtrack to the world’s introduction to  Ray Barbee in Public Domain, while McRad was also fast and loose enough to keep up with Tommy Guerrero as he destroyed the  hills of SF.

Coming out of Philly in 1983, McRad released a classic hardcore record, Absence  of Sanity, that had heavy traces of Bad Brains throughout. That record has just been  re-released on Uprising Records. Since splitting up, Treece has been busy playing with everyone from Bad Brains to Urge Overkill to Billy Joel. While those studio gigs helped pay the bills, Treece had been itching to get McRad back together, so he recently recorded FDR completely on his own.

The disc features classic tracks revisited (“Weakness” and “McShred” to name a couple), and brings a tighter production and sometimes-metal feel to the mix. This is a tight record. Right from the get go, the  simple chords of “Ejected” will remind you how McRad did a lot with a little, and  heavily influenced what’s become the  pop-punk phenomenon.

Treece auditioned to sing for Bad Brains when HR was unable to continue with the band in the early ’90s, and his moaning cry  on the song “Feel” proves he could’ve pulled that off as close as anybody could have  pulled off replacing HR. Point is, Treece  has chops on every instrument he works.  The drums charge. The bass runs along, getting a funky lick in where it can, and  the guitar glides through riffs, build-ups,  and metal leads like new trucks on  metal coping.

Some of the riffs and variety bring to mind the crossover style that Fishbone was working on in the early ’90s, but at a sped-up clip. There’s a hint of Eddie Hazel twisting up the riffage, and that’s a good thing. This is deceptively simple music that, in the wrong hands, could be wanky bro-hymns, but here is a classic resurrection of a style that, even though it’s been diluted to shit, still compels you to go out and shred. The way good music always has and always will.

Download McRad albums and songs from the iTunes store here or check out their myspace for updates.
© 1981–2021 High Speed Productions, Inc.