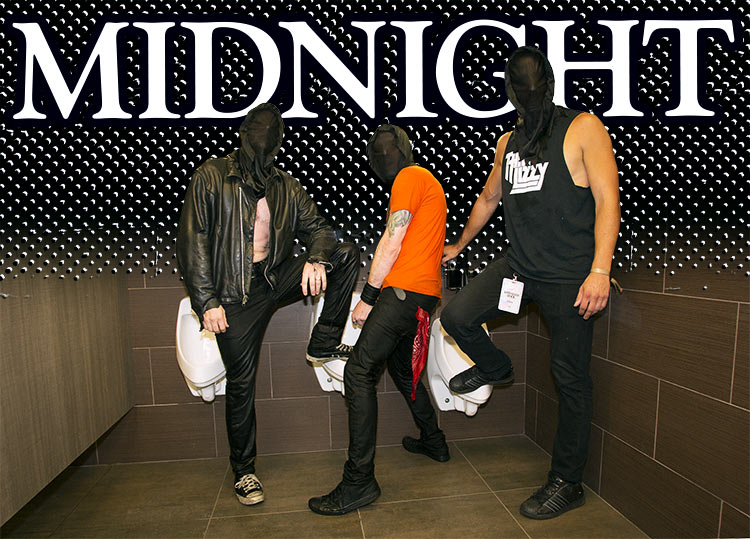 I caught Midnight for the second time at the Psycho Las Vegas fest, and if most of the bands were like melting into a couch in a haze of bong smoke, Midnight was a shot of adrenalin to the heart. Masked, fast and dirty, they tore through a breakneck set that left jaws agape and harshed some mellows. They’re like a dash of punk, an ounce of metal, but really just some of the best speedy rock ‘n’ roll I’ve seen in ages. I managed to squeeze a few words of wisdom from Athenar. Interview by Wez Lundry | Photos by Jordan Joseffer

Which one you got?
Frosted Flakes, Fruity Pebbles, a whole monster collection of cereal in general.

I heard Cleveland rocks.
Cleveland has a tendency to rock. It has very much the possibility to rock, but you know a lot of the people here, myself included, hardly give a shit about much of anything else. I don’t care if it does rock, but it definitely can rock.

I remember seeing you guys in some shitty warehouse in Tempe. Your van broke down but you made the gig and young punkers were trying to slam dance. You’ve come a long way.
I haven’t come a long way. I’m in the same head space I was when I was ten years old. The intellect of the world is going downhill, so they came down to our level. But yeah, that was an interesting show.

To what do you owe this satanic success?
Like I said, success is waking up in the morning or  whenever you wake up and—shit—what is success? I have no fucking clue.

Your guys’ mask-slash-hoods look a little like a cross between the Mentors and the Locust. Which of those two bands would win in a fight, assuming  El Duce was still with us?
In a fight of wit? Or a physical fight? Fit of rage? Never met the Locust, don’t know their music, don’t know those guys. I’ve met Dr. Heathen Scum, Sickie Wifebeater and El Duce. They didn’t seem too violent. They’d probably get together and smoke some dope and get hammered.

Did you know there is another band out there called Midnight who appear to be a group of balding and grey-haired middle-aged men doing soft-rock covers? Or is that you guys making some dosh on the side?
Sounds like a good description of me! I guess our music is soft rock compared to Cannibal Corpse or something. I didn’t realize that, but yeah, it does sound like us.

Sounds extreme. You guys are clearly way more rockin’ in a punk way than a lot of metal bands. Did you find the two together or one after the other?
You know what, as a kid I was into pop music, radio shit. And it just kind of—I heard Van Halen, and it was, like, “Whoa, that’s up my alley!” It’s all downhill from there. Started on metal, two years into it I hear the Dead Kennedys, Misfits and stuff that a 12-year-old boy would hear. You don’t go directly into Rudimentary Peni or anything like that. GBH, shit like that. Growing up in the Midwest, you don’t have to be just a punker or a metal head. You can like  Ted Nugent and Black Sabbath and Judas Priest and the Dead Boys. It was all just obnoxious music. 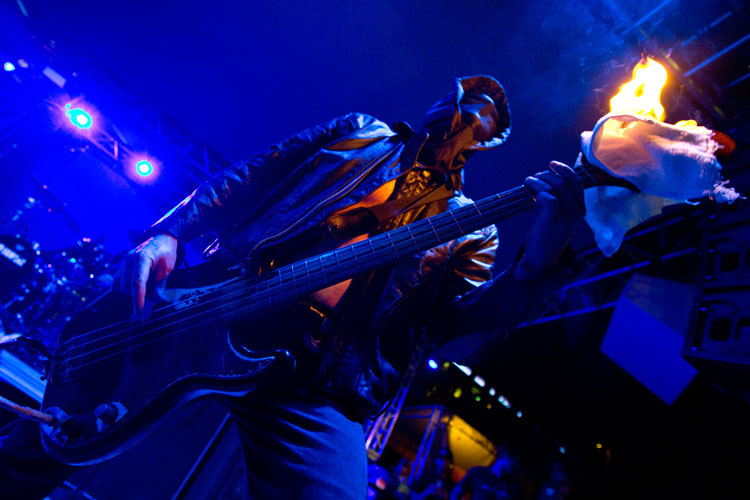 Any of you guys skate?
I did when I was a kid. I had Valterra, the Kmart board. It was 19 bucks or something, but it was more or less used as a way of transportation, cruising around the neighborhood thinking we were bad asses. I pretty much had no other interests in life but music.

What do you have to say to the readers  of Thrasher?
It’s been a long time. I actually did have a subscription when I was kid just to see the Misfits and Samhain and Suicidal Tendencies ads ‘cause they weren’t in the metal mags. Are those ads still there? Plan 9?

Yeah, maybe not Plan 9 but Suicidal.
Keep those ads in there and keep reading the ads and Suicidal Tendencies things. That makes zero sense.

Got anything more to add?
I don’t think so. I would just make it more idiotic. Thanks for doing this!