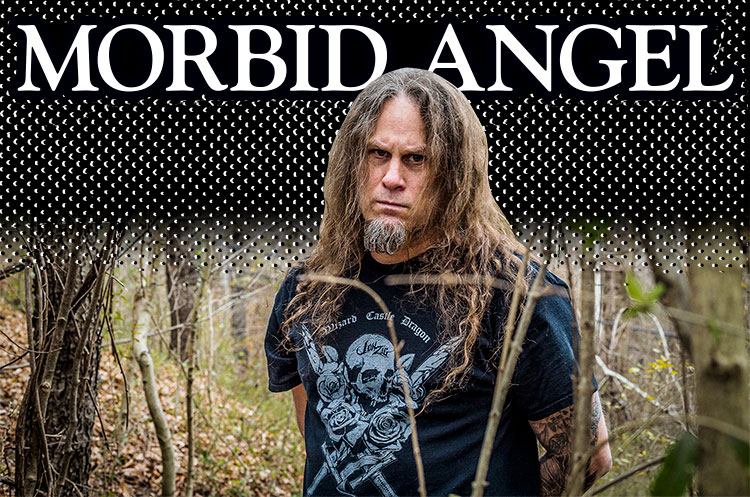 Morbid Angel is one of the true originators of the beautiful art of death metal—blazing guitars, stampeding drums, monster vocals and general darkness wrapped in a ball of fire. Their new album, Kingdoms Disdained, brings them up to the letter K. The first record, Altars of Madness, was followed by Blessed Are the Sick, and they’ve named each successive record in alphabetical order; it is excellent. Founder and guitarist Trey Azagthoth is regarded as one of the best guitarists of all time and is known for his interests in magic, video games and self-help gurus Tony Robbins and Deepak Chopra. Bassist and singer, Steve Tucker, is back in the band to provide the low roar. Tucker was seen by millions of hoity-toity art fans around the world when he was featured growling to the sound of bees and drums (played by Slayer drummer Dave Lombardo) in Cremaster Cycle, a 2002 Matthew Barney film. Here Steve talks about Björk, reggae and discipline. He offered no clarification on whether or not Morbid Angel ever actually toured with dug-up human remains. —Nate Denver

Does Morbid Angel have an ethos?
The main objective is always somewhat spiritual. It’s about doing what thou wilt. It’s the opposite of being restrained by religion. I think that Morbid Angel would follow the ideas of science more than religion. When we talk about spirituality we talk about that inner thing, that thing that makes you go or stop. Some people, they go so far and then give up easily and I don’t think that anyone involved in this is that sort of a person. The mentality of Morbid Angel is to constantly push.

Do you and Trey talk about Deepak Chopra and Tony Robbins?
Trey was into that more than me, but we definitely talked about it. If he’s into something, you’re gonna talk about it when you’re around him. Like, Tony Robbins, that to me is very basic shit that I thought everybody had already inside of them, until Trey introduced me to more Robbins and I could see how it could help to keep some people more motivated. I’ve always been pretty damn motivated. If I want something I’m gonna do everything in my ability to make it happen. Not everybody is born with the same drive. It’s great if it helps some people. If this gets someone up off their couch, that’s a wonderful thing. I think the same thing about religion: it’s there for people that need guidance. Not everybody needs moral guidance.

How did you build your guitar skills?
When I was 14 I cut grass and shoveled snow to get my first guitar. It was sort of a James Hetfield ripoff. Metallica, they mean the world to me. Once I got that guitar, my drive was to be able to downpick the way Hetfield did. I wasn’t so interested in scales or the twiddly-twiddly, so I sat around and picked for four-to-six hours a day. As soon as I got home I picked it up, and that guitar stayed in my hands until I went to bed.

Have you ever met Metallica?
I’ve met Jason Newsted and he was great, a metalhead, just like me. The one I’d really like to meet is James. Not so much Lars ’cause, dude, I’m not a drummer. I’ve been in bands a long time and drummers are my enemy at times. Ha! I’d love to meet James Hetfield and Kirk Hammett; it’d be really cool.

What are some of the best rumors you’ve heard about Morbid Angel?
The constant is that it’s Satanist, and I don’t try to shake that off, ’cause if you’re gonna try and lump us somewhere, I would prefer to be there. I’ve heard lots of weird stories and get asked, “Did this happen?” and the answer is almost always no. For me, Morbid’s a band that’s always had a mysterious persona about them. That’s very intentional.

Would you consider yourself antisocial?
I am to an extent antisocial, but when I meet someone who’s interesting, I’m the total opposite of antisocial. I’m in utter heaven, for lack of  a better word.

Who are some of the most disciplined people in metal?
Erik Rutan and Pete Sandoval. Those guys are as repetitive as you can be. Erik probably has ADD. He has a hyper focus ability that a lot of people don’t have. And Pat O’Brien who’s in Cannibal Corpse, that guy is always playing guitar. You walk in the guy’s house and he’s playing guitar while having his coffee. Everybody’s sitting around bullshitting and Pat’s sittin’ there playing guitar. Those guys are the most disciplined.

Have you ever been scared on the road or on stage?
The last time we were in Portland, all I did was see crazy shit all day long. It was like being in a counter reality—more homeless people than I’ve ever seen in one place. At Voodoo Donuts I saw a guy destroy his hands on a parking meter. He was beating on the meter until someone pulled him away. All day long, that’s how it was. For me, I don’t want to say scary, but if the whole world was like that, it would be a scary place.

How does guitar sponsorship work in death metal?
All companies are different, but I have a relationship with Blakhart. They give me guitars for my band Warfather and basses for Morbid. They give me guitars for the road but if I want something extra I get a discount. I used to endorse BC Rich. I played those because I love BC Rich and I started playing Blakhart ’cause I love their stuff. I don’t necessarily need an endorsement; I like playing what I like to play.

Do you like reggae music?
I burn and I do it because the world is noisy and it helps me focus on my thing, and I gotta say, there are some places that reggae music is quite cool. It fits the vibe.

Who is the fastest runner in Morbid Angel, from any era?
Pete Sandoval, our drummer, without a doubt. I think would zip by all of us, and he would still be running when everyone else was bent over puking.

What happens when there’s a flub on stage?
The only time there’s ever a flub is due to something that happened in the venue, like if electric went out on a side of the stage. By the time Morbid goes on stage, we are extremely well rehearsed. As long as the drummer is playing the way he’s supposed to play, there should never be any problems, and Morbid has only had amazing drummers.

How did you end up in Matthew Barney’s Cremaster Cycle?
They asked if I’d like to be involved in this film.  Next thing I knew they flew me up to New York and I got to hang with Matthew and it was a neat experience. Matthew Barney is one of the most normal people that I’ve ever met in my life. I could relate to him 100 percent, but then you see the film and it’s like, wow, where is this shit coming from? Pretty interesting guy.

Was Björk around?
Not at that time. I think it was around Heretic, the eighth Morbid record, that they were together and had a child.

Björk is unique.
There’s no doubt about it. It’s original. I’ve never been a subgenre guy, ’cause a subgenre means you took one element of somebody’s music and you focused on that element. Originals don’t do that, dude. Björk is definitely one of those people where no one could ever say someone is a Björk ripoff, ’cause no one could come up with the shit she comes up with. She’s just too fucking original.

What would be your starter pack to get someone into death metal?
I’m still 100 percent fond of the old-school stuff. The stuff coming out around ’91 to ’94. If I have to turn someone onto Morbid Angel, Covenant would be the most obvious. You wanna show ‘em some Obituary, Cause of Death, that is the simplest, yet completely effective. Malevolent Creation’s Retribution. Deicide’s Deicide and Legion.

I love Deicide.
When I first heard Deicide I was like, “Oh my God, I’m in the middle of a horror film and loving every second of it.” Just absolute brilliance for me. Deicide and Cannibal Corpse, it’s like a progression from Slayer, but it’s far more evil and agitating.

Did you sing a lot to your kids when they were little?
I used to play a lot of acoustic guitar and make up stupid little songs to make them laugh. For kids, if you’re making them laugh, you’re succeeding. I enjoyed that; it was fun. I’m lucky; my kids are good people. I really like being around them. But everybody knows how well or not well of a job they’ve done as a parent. I think I did a decent job.

I’ve always found death metal to be very calming.
For me, I think Morbid sort of opens a door. There’s a gateway that opens up and you go into Morbid Angel world. I don’t care about reviews, because I know about Morbid Angel—nobody’s gonna get it listening to it once or twice. You may find a song that you dig, but you’re not gonna really get it. You gotta find the time to get in the vibe, and if the vibe doesn’t work for you, you’re never gonna get it.