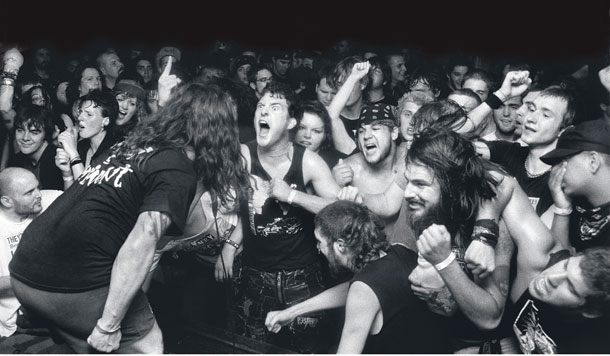 Hail to the tradition of beer-soaked, bloody thrash. I can hear skateboards crashing, bottles breaking, guitars dropping, screams of pain and joy. DRI, COC, the Accused, and Slayer first wrote the soundtrack to the early days of debauchery in the Reagan years. Fast-foward almost two decades into the George Jr years, and we find the bastard child of crossover metal Municipal Waste. Now, these dudes ain’t trying to rewrite the book of thrash, but they sure dusted it off and added a whole new chapter. Lead singer Tony took the time to answer a few questions. Check it. —Sam Hitz

Who’s all in the band?
Municipal Waste is Ryan Waste on guitar, Dave Witte on drums, Land Phil on bass, and Tony Foresta on vocals. Who started it? Me and Ryan started the Waste back in 2001. We played our first show on New Year’s Eve to a bunch of drunk, moshing Richmonders.

What’s different between your shows and most metal acts?
We have beer bongs and wizards. They have tight pants and  nice haircuts.

How many times have you toured around this country?
We’ve toured a shitload. We played out west four times and have been to Europe and Mexico. Now we’re setting our sights on Australia for next year.

What cities keep you wanting to come back?
We love playing the Bay Area. We have so many good friends out there, it definitely feels like our second home. Rochester, NY, is pretty sweet as well. Those kids are lunatics.

What country would embrace your all-out attitude the most?
All of Europe rules. I wish I remembered it more the last time I was there. We’re leaving next week for our second European tour and we’re very stoked about it. Hopefully I can remember more this time. Our set went over really well in Holland, Poland, and the United Kingdom. The Germans also love the thrash.

What are the band’s critical influences that might not be obvious?
I think we pretty much wear our influences on our sleeve, but there are a few bands out there that people wouldn’t expect. Bands like English Dogs and Hollow’s Eve are pretty big influences. We also dig a lot of hardcore stuff like Chain of Strength, Integrity, and Gorilla Biscuits.

How important are the lyrics?
There’s definitely some humor, but it gets a little serious with substance abuse and revenge topics. Believe it or not, we actually put a lot of time into writing our song lyrics. Some songs are borderline serious, but we try to stray away from stuff like that. We think that we would do a better job singing about monsters and shit. We’ll just leave all the political stuff to everyone else. Lots of bands go for the four or five minute tech ballad and try to display all their styles and talents in one song.

Explain to the reader the effectiveness of a minute-long barrage to the senses.
Municipal Waste has ADD. We can’t write a long song because we get bored way too fast. I mean really, who wants to hear the same riff played over and over? I’d rather be eating pizza or jerking off.

Are you guys working-class thrash or fuck-cash thrash? Do you hold down any jobs outside Municipal Waste?
We try to tour constantly so it’s pretty hard to hold down a steady job, but most of us work small part-time jobs when we’re home. We use this band to stay away from work as much as possible.

What does a good label mean to Municipal Waste? Does it just mean a little more beer cash, or does it really help you get around and spread the carnage?
Being on Earache hasn’t really changed much for us. We just have more money to do dumb shit like shoot videos and stuff. They’ve also helped us get our music out to a whole lot of people that would otherwise never know we existed. So they help us a lot in ways like that. Plus they give us a lot of free shit, which is good.

What bands do you jam with? Clue us in on some underground groups who the masses wouldn’t recognize in your ’hood.
Here are some bands to check out: Caustic Christ, I Object, Career Suicide, Pink Razors, Annihilation Time, Direct Control, Baroness, Deadfall, Asshole Parade, Inepsy, and Rambo.

Municipal Waste fits perfect in the new Thrasher flick Keg Killer. Any skate background in the ranks?
None of us skate. Doesn’t that suck? I tried dropping in once, and after the third time of landing on my face I just gave up.

If you could describe the future of the band using a happy-hour well drink as an analogy, what drink would it be?
That’s probably the weirdest question anyone has ever asked me. You’re freaking me out, man.