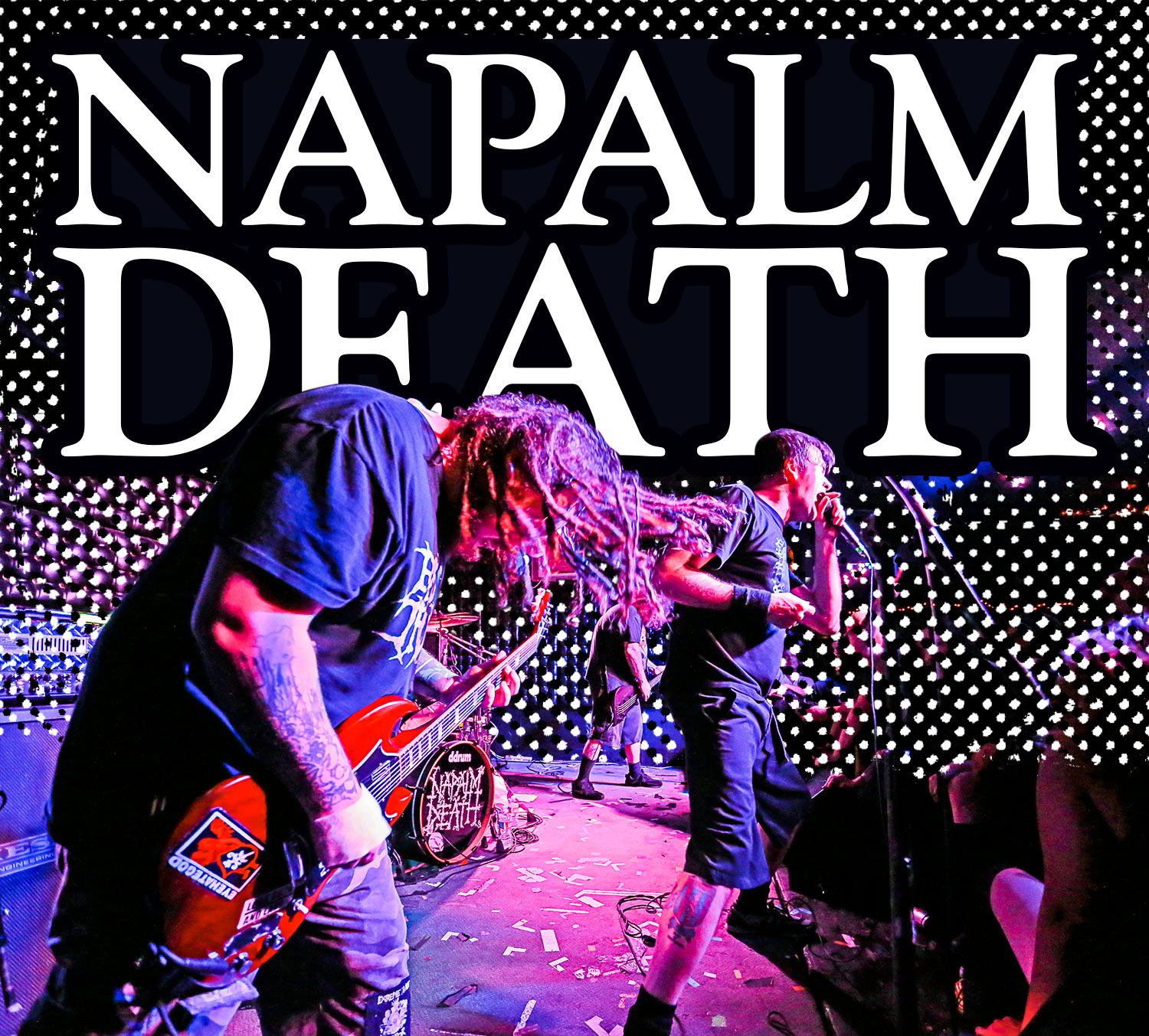 Often called the “godfathers of grindcore,” Napalm Death originated in Birmingham, England, in 1981. As early pioneers, they’d go on to unintentionally influence a slew of bands with their unique sound by bridging the gap between death metal and grindcore. The band signed with the UK’s legendary Earache Records in 1987 and released their first studio album, Scum. Napalm’s second album, From Enslavement to Obliteration was released in 1988 to critical acclaim, basically putting the group (and grindcore) on the map. After joining the band on their third studio album Harmony Corruption in 1990, vocalist Mark “Barney” Greenway has been the face of Napalm Death—along with fellow band members Shane Embury (bass), Mitch Harris (guitar), and Danny Herrera (drums)—for the past 26 years. Touring for their latest (and 16th) full-length album Apex Predator: Easy Meat, we caught up with Barney before a recent gig at The Casbah in San Diego. —Aaron Schmidt

How did you get the nickname “Barney?”
Actually, Stick—the drummer from the band Doom—gave me that name when I was a teenager because I was really reckless with alcohol and stuff. I used to get super smashed, as a lot of people do, but I had a special gift to be able to destroy things unintentionally. For example, I’d lean on a radio on the wall or something and it’d just come off—even though I wasn’t applying any pressure. So Stick gave me the nickname “Rubble,” because I’d reduce things to rubble. That gave way to “Barney Rubble,” and then after a while—it became just “Barney.” So it’s a bit of a play on words. Stick was very much the creator of that nickname.

What were your favorite bands growing up?
Motörhead was the very first, because if it weren’t for them, there wouldn’t be any of this, basically. The real ironic thing is that I think for them it was somewhat unintentional. It was just so off the rails, musically, and quite sporadic—that’s how it worked out. To be totally honest, I liked metal—but nothing was as important to me as Motörhead. After that, it was GBH, Discharge, and then it was on to European and American hardcore bands as things got faster and more intense.

Your first album with Napalm was Harmony Corruption. It’s listed as one of the greatest death metal albums of all time. How was it working on that album?
The thing with Harmony Corruption was that it was never meant to have that sound. We didn’t want that to be our sound. We still had one foot in that nasty punk sound, so it wasn’t our intention to get that clean of a sound. Me personally, I don’t like the sound on that album.  I mean, I love what Scott Burns [legendary death metal producer at Morrisound Studios in Tampa] did for us and I’m not saying that it was a bad thing. I wouldn’t change Harmony Corruption at all for what it is, but another part of my mind says that I would’ve loved to have it sound differently. I totally understand that a lot people looking into Napalm from the outside really love everything about Harmony Corruption and don’t have a problem with the sound. Obviously, I have my own perspective.

Whose bright idea was it to take a British grindcore band to record a death metal album at Morrisound Studios in Tampa, Florida? It was the epicenter of death metal in the early ‘90s.
Earache was really pushing death metal at the time, and for us as young kids from working-class areas who’d never been outside of the UK—we were, like, “Fuck, three weeks in Florida? Yeah!”

What are your top-three Napalm Death albums?
Well, I’d say definitely the new ones because I think that as times goes on, we get a greater idea of the amount of metal, punk, post-pop and no-wave influences—all that stuff gets mixed together. I think that the amount of mixture gets better as time goes on. But I’d say probably Enemy of the Music Business and then Utopia Banished as well because I think that was the point where we really kicked it into gear. Harmony Corruption should be mentioned, too, because I think it has some really good songs.

Who or what has been the biggest influence on your lyrics?
Well, here’s the thing: I always try and formulate my own ideas. The ideas are never completely new, of course, but that’s not a bad thing. What I mean by trying to be original is the way you write them, using pathos, comedy or double meaning. It’s more about the style and that’s really important to me. If there was any one person who’s close to that, it’s Jello Biafra because I think he was the master of writing lyrics that sometimes were pure comedy but were also super serious.

What’s your take on the political climate of the United States right now?
There are two hats that I wear about this thing. In one hat, I really have a complete disregard for politicians in general, because to me politics are usually about making token gestures and not really tackling what the real problems are. Problems like extreme inequalities, poverty, no health care system in the fucking United States and that’s fucking absurd. But then my other hat is that I like Bernie Sanders. I like the things that he’s saying. I “feel the Bern.”

What’s your “guilty pleasure” song?
It’s actually a Mariah Carey song called “Looking In.” I think Mariah is pretty punk when you think about it because she’s so outwardly wacked out, man. It’s like a piano ballad, but it’s so insanely depressing. I don’t think she meant it to be so depressing, but I think it’s probably because she was so fucking mixed up. When you listen to it, you’re, like, “Holy fuck.”

Did you think Napalm would last this long?
Fuck no. You’ve got to remember that for several years it was fucking rough. We didn’t even have a handful of fucking pennies—it was that fucking rough. But we just rolled through because we always believed in what we were doing. Honestly, I thought I’d just give it a good couple of years. Now I’ll have something to really look back on in life and say that I fucking did it.