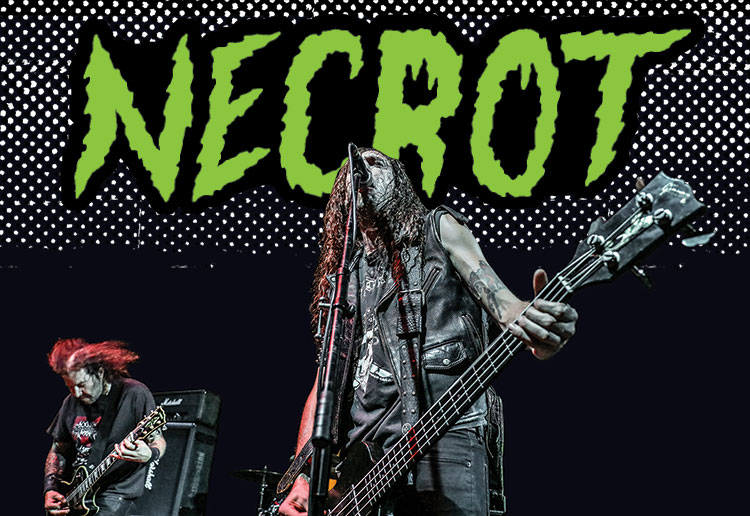 Necrot’s first full-length album hit hard last year and continues to amass praise from metalheads and punks alike. I have a stubborn habit of avoiding albums that gain rapid popularity out of the gate, but with Necrot there was no looking away. From the first glance of the truly disturbing artwork to hearing the last note, Blood Offerings is a stacked novel of death metal. When I finally got a chance to see ’em live, they backed up the hype in the execution of every song they played. The experience festered in my ears and an interview was inevitable. The backbone of the trio, Chad Gailey, picked up the phone and gave me a little insight on the album and their past year. —Sam Hitz

Are you surprised at how popular Blood Offerings is with fans and how much media attention it got last year?
Yeah, we were definitely surprised. I mean, I was. We went in with the intention to make a sick as fuck record just because previously we’ve only done demos and everybody was sort of waiting for the actual thing to go down. It took a couple months but I think it was definitely worth it and we were really happy with what we put out. You know, you go in expecting people to like it and everything but the amount of good feedback we got initially was great and then it kept rolling in. Even Scotty from Tankcrimes Records was watching it unravel, like, “Damn! This is sick!”

Simply put, hard work pays off.
Yeah, we’ve been working hard! For the first year it was just Luca and I practicing three times a day writing songs. We recorded two demos by ourselves and then once we got Sonny on guitar it completed the lineup and we pretty much played shows and toured right off the bat.

Was there any major gear changes going into the studio to record the album? Any lessons taken from your demos,  Into the Labyrinth or The Abyss?
As far as gear we’ve always used sort of the same stuff. When we record with Greg over at Earhammer Studios, I’ve used his drum set on the recording. Luca brings in his stuff and we play around with some extra bass gear Greg might have had. Same goes for Sonny. We always just use the same stuff we use live and kind of mix things up in the studio just to see if we can get a better tone that we can all agree on. But yeah, I don’t think much really changes. We try to emulate the live sound for the record as much as possible and I think it came out sick.

Seems like Necrot played hundreds of shows last year. Any highlights?
Well, in February we did a tour with Phrenelith, our friends’ band from Denmark—we played Famine Fest. That was, like, the first tour we did last year. We did a West Coast rundown from Seattle to San Diego for about two weeks. Then in July we sold out Saint Vitus bar with Undergang, Horrendous and Siege Column. That was sick as fuck! We played with Cianide in Chicago at Reggie’s. That was unreal! It was fuckin’ packed!

That’s some epic Chicago shit right there.
Yeah, for real. And getting to play with Cianide of all bands, we couldn’t believe it. It was an honor and overall amazing night for everybody.

What’s your personal favorite song to play live from Blood Offerings?
“Shadows and Light” would be my favorite because it’s high energy and has all the good stuff about punk and death metal in one song. After that it would maybe be “Empty Hands.”

The songs “The Blade” and “Layers of Darkness” really open and close the album like a complete book, if you will. How much of a conscious effort went into the opening and closing arrangements of Blood Offerings? They seem crucial to the album.
It wasn’t in any order. We didn’t go in and, like, “This is going to be the first song; this is going to be the last,” you know? We learned all the songs, kept playing ’em, practicing, recording ’em and by the end of it—it was, like, well, these ones are obviously going to be the first and last ones. They’re just sick as fuck. Especially “The Blade.” When we finished learning that song we were, like, “God damn!” It’s such a beast of a song.

Yeah, it feels complete.
I’m stoked that you like it. I mean, “Layers of Darkness” is one of my favorite songs on the album but it sucks ’cause we never get to play it live during the set if we’re not headlining. It’s such a killer song and I think it encompasses a lot of what Necrot is.

Has the dust settled with this album? Is the band itching to write new stuff or just continue touring?
I think we are going to continue to tour as much as we can on this album. We’ve been talking about Japan and Australia. We’re goin’ to Europe in September to officially tour Blood Offerings but I’m definitely interested in going and writing the new album as soon as possible to keep it all there, you know? Keep the hype going, so to say.

Yeah, you’re on a roll. Any shout outs?
I definitely want to shout out to every band that we have played with last year, our PR person from Earsplit PR, Liz, she’s rad, Scotty from Tankcrimes and Dan Rozenblum and Ron from Crawlspace Booking.

Many thanks for the words; you guys are the real deal.
Right on! I’m a huge Thrasher fan. I’ve read the magazine for years.