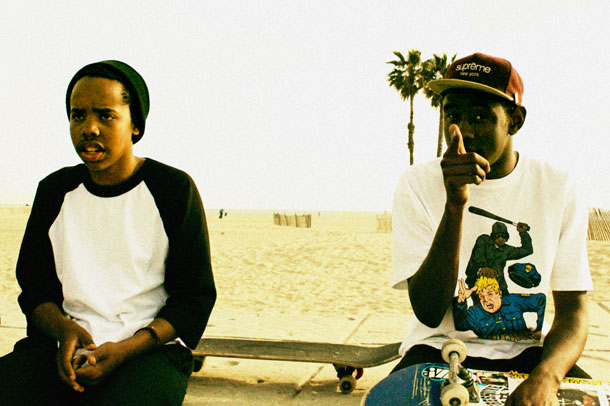 “People want to put us in a box, but every horror-core rap group I’ve looked up sucks”

Some of the most interesting rap right now is being created by a teenage group of LA skaters called Odd Future Wolf Gang Kill Them All. The central figures of this weird kaleidoscope of free-to-download albums, experimental filmmaking, photography, illustration, and bro-cam footage are Tyler the Creator and Earl Sweatshirt, two deft rappers who spin tales of violence and insanity with an uncanny levelness. Tyler handles a fair portion of the production work, and his trademark beats are geometric and crunchy like the scores of 8-bit video games. Buzz surrounding their most recent efforts (Tyler’s Bastard and Earl’s S/T album) have left 19-year-old Tyler handling near-daily interviews while his three-year-younger cohort whittles away time at boot camp (a punishment for getting a skating ticket).

I hear skateboarding in the background. Did you just ollie something?
Oh yeah. I was just going down the street right now.

You’ve gotten a ton of press lately. What are the common questions journalists ask?
The questions about how Odd Future started, what music we  listen to, how old we are. What really  pisses me off, though, is when journalists  tell us how we remind them of a younger version of some random-ass rap group from the ’90s that I’ve never heard of. They always say we make horror-core music, but I hate  that shit.

Is that because you guys have violent videos about murder?
That’s it. People want to put us in a box,  but every horror-core rap group I’ve looked  up sucks.

Like Gravediggaz?
Yeah. I looked up two songs and I was like,  “Yo, this is wack.” I almost cry, man.

Are you worried about Earl being in  boot camp?
I worry that he might get brainwashed like some Fight Club shit. Maybe he’ll come  back tall and buff, some holy Christian who hates society.

You’re in your second year of film school. Does Earl have college plans?
His grades are pretty legit but he hates  school, and I do, too. It’s just nothing I enjoy.  I like skating, making music, filming, and pissing people off. You really can’t do that  at college.

What can pissing someone off teach you?
I enjoy it because it makes me feel better. I pissed my mom off this morning.  She thought someone hit my car, but really it was me—I lost my radiator cap, so I kicked the fuck out of the car. She took my key.

Why would she take the key if it’s  your car?
She bought it, so that’s her way of discipline. But whatever—I got my boys and we’re always going down the street, so I don’t fucking care.

You wear a lot of Supreme gear in your photos. Are you sponsored by them?
Nah. I mean, I love Supreme. We skate and loiter at their LA store all the time. They always look out for us because we’re the young ones on the block. If we were to  ever need a board or anything—they’re the father-figures we don’t have. It would be cool if Supreme sponsored Odd Future on some we-fucks-with-you-lil’-niggas type shit. It’s  not about the money, but do you know  how much business I’ve gotten Supreme  from black kids over the past couple of months? Goddamn!

The iTunes genre you set for all Odd Future releases is “Fucking Awesome.” Is that a Jason Dill reference?
Yeah, Jason Dill is one of my favorite skaters. At my first performance I wore one of his Fucking Awesome! t-shirts. In fact, I was kicking it with Jason Dill a couple months ago outside Supreme. He’s cool as fuck and crazy as shit. One of his homeboys, Dash Snow, was really inspirational—like IRAK. All that New York shit is really awesome. I think that vibe defines my music. It’s not rap, it’s not jazz—it’s Fucking Awesome!

If Odd Future gets huge, do you think you’ll have to rap about less messed-up stuff?
I say be what the fuck you want to be. Always make music you want to listen to and fuck everyone else’s opinion. That is probably one of the reasons  I like Jason Dill so much. He won’t do a big-ass nollie tré off a 15 set, but he’ll do a sick ollie off a bump in the middle of the street. I think that shit is amazing, because he’s skating the way he wants to. When I make a song, I think about it as if I was making a video sequence. I’m trying to put picturesque detail in your head while you’re listening to it.

Like a screenwriter creating a storyline that involves a murder scene.
We’re also into serial killers. I could make  a song written from the standpoint of  Jeffrey Dahmer.

Do you think you could kill a person?
I’m not going to lie. In a certain situation,  if I had to defend myself, I think I could kill somebody. But it’s not like, “Oh, I’m crazy, I’m going to go take people’s lives.”

Right. You could hold their head under the water.
I guess. Or I could just throw the toilet  at them.
© 1981–2022 High Speed Productions, Inc.