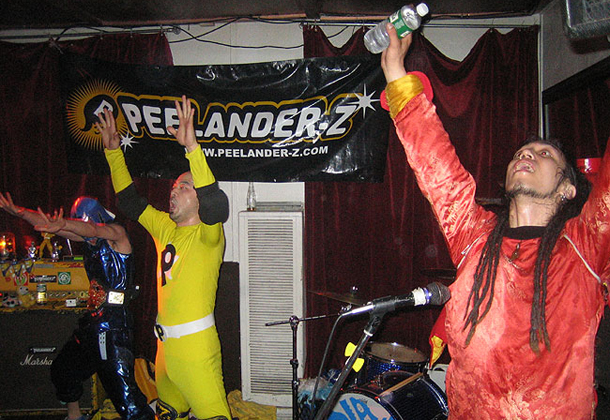 "We are influenced by all of pro-wrestling."

Recently, some friends and I went down to the Parkside to get a few beers and hang out. We're sitting in the patio and some Japanese guy in a wrestling outfit walks by with a guitar, so I followed him to the stage. The rest of the band shortly followed—all in wrestling attire—and soon started rockin' the house. The music was epic, but more importantly their stage perfomance was on another level; complete with wrestling antics, crowd participation, signs, and a human bowling act. To put it mildly, we we're all floored. I caught up with them afterwards and got some words out of this trio from the planet Peelander.

Where did the name Peelander Z come from?
We are not human beings. We come from Z area of Planet Peelander; that's why Peelander Z. Did you start out in Japan? No, we met in NYC.

How long were you playing before the move to New York, and what made you decide to move there?
We’ve played for five years in NYC. We didn't do anything before we come here.

Are you all fluent in English?
No, we just speak Japanese, Peelander-telepathy…and some broken English!

Have you always used props in your music (signs and costumes,etc)?
Yes, we love to play on stage with the audience.

Do you always do the human bowling ball routine?
Yes, we do! But we are not human, that's why “Peelander bowling”! Come to see by your third eye! 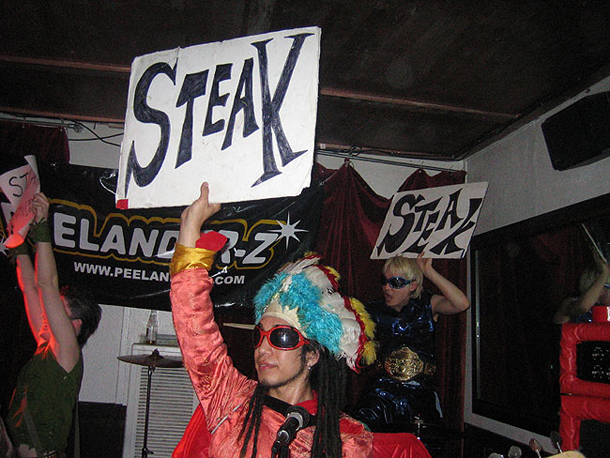 What other Japanese bands should we keep our ears open for?
TOKIO is the best Japanese band. They are cooool!

Favorite Japanese beer?
We can't drink beer. We drink only our PEE.

Who are some of your favorite wrestlers?
Andre the Giant, Terry Funk, Mill Mascaras, and Misawa.

What do you like better, steak or sushi?
Both! Sushi is Japanese superstar. Steak is American superhero!

What does the future hold for Peelander Z?
Japanese suplex hold! We want to play Madison Square Garden with Mill Mascaras and Dos Caras on wrestling ring.