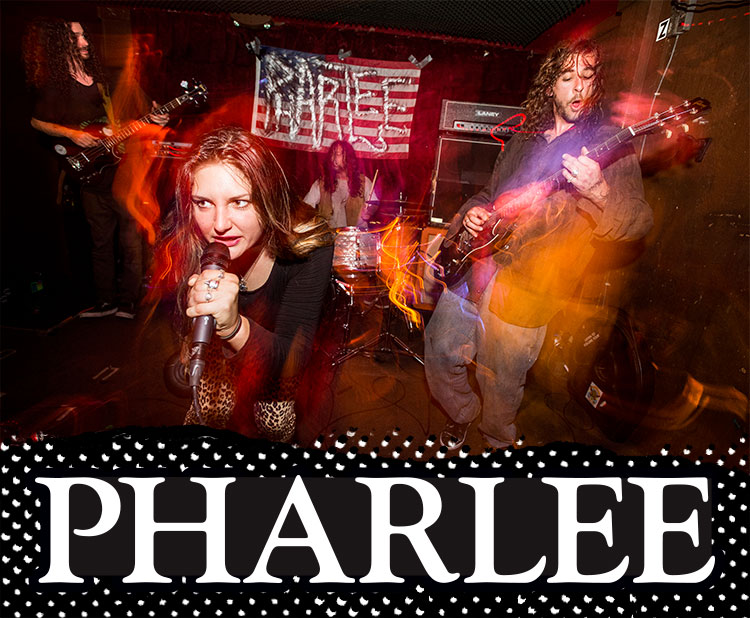 I first met Figgy back in 2010 on a Skate Rock trip from Atlanta to New York.  I quickly realized he was more then just a beast on a skateboard, he also had a real talent with the guitar. I met Macarena Rivera at a Thrasher Death Match in 2013 where she sang for a band called The Budrows. I think that Death Match is actually where Mac and Fig met as well. Now here it is 2016 and the two have formed a new band with Joose and Dylan called Pharlee. Let them explain the rest. —Schmitty

Okay, so how the hell did you get yourself in another band?
Figgy: Always in search of more noise. Met the drummer, Joose, in Portland and heard a couple other bands he was in—fuckin’ Meatball can smash. Dylan is the guitar player from Sacri Monti, one of the smoothest  players I’ve heard and he was stoked to play bass. I’d seen Mac’s other band, The Budrows, play in Texas years ago. Fuckin’ lady can sing. After sending Joose some riffs and him recording the drum track over it, I seen that this could work. Spent a good year with Joose and Dylan in the garage before anyone even really knew about it. Mac came in with the lyrics in the end and brought it together.

Where did the name Pharlee come from?
F: When that Chris Farley Baker graphic came out that Ben Horton did, Rowan suggested that we call the band Pharlee. Also was throwin’ around Writ. We played our first show as Writ, I think. Me and Collin P were partyin’ one night and kinda swayed toward the fat maniac. I think Pharlee has a better ring, anyway. Thanks, Row.

Shouldn’t the band be called Roomies?
F: You mean Enemies?

Will we ever see all three of your bands [Arctic, Harsh Toke and Pharlee] play the same show?
F: No way in hell!

Which bands inspire Pharlee the most?
M: Definitely Iron Claw, Danava, the Groundhogs—fuck, I don’t know. Betty Davis is an inspiration for me as a performer. Holy shit she is badass!
F: Judas Priest, Danava, Tina Turner, Etta James, Betty Davis, Motörhead—I could go on for days.

Top-three concerts you’ve been to?
F: Pat Benetar, Joan Jett and Magma.
M: Loom in the middle of nowhere, Ghoul in SF and Motörhead at House of Blues.

Is there an album  coming out?
F: We’re recording this summer.

What’s a typical show like?
F: My guitar out of tune, Joose haulin’ too much ass, Dylan nailing it and Mac breakin’ a heel, landin’ on her back winning.
M: So far it seems as if we bicker about what song to play first, we start playing, chug some whiskey and chase it with a fingerful of honey, there’s a moshpit, I tape up my platforms, Joose wails on drums—impressing all the ladies—Dylan wiggles on the bass, someone gets beat up in the audience, Figs is stoked and then my shoes break and I eat shit on stage. Then the bouncer pours out my handle of whiskey and I burn down the bar while the boys get the gear. We celebrate by gaining speed, then Joose has a foursome and we finish by finding Dylan in a different country.

Is liquid courage a must before and during live performances?
M: Not necessarily. I’ve been playing shows since I was 15 and never drank before or during the shows. My stepdad is the lead guy in The Budrows, so he kept me in check. And we also do three-hour sets sometimes. You can’t be plastered and expect yourself to remember 40 song lyrics and be in rhythm while you also play percussion. Once I turned 21 I started drinking more when we played. I just didn’t wanna burn any bridges before, being so young in the scene. I tried to be somewhat professional about it. With Pharlee it’s a little different because we play just one set and everyone is getting wild. I think that if the audience sees you feeling it and having an awesome time they’re gonna do the same. The flask and bottle on stage is also just a thing that goes on in normal life too. I never go to a bar without a flask or three in my pocket, so why would I not have one on stage. And fuck, might as well bring the handle of Kessler on stage ‘cause the boys definitely want some booze. Ha! There’s only a few times where the liquid courage takes its toll on me, and that’s when people aren’t moving or showing any sign of enjoyment in the audience. It makes me feel as if we’re the only ones having fun, like trying to rile up a bunch of 60-year-old deaf sheep. Pisses me off. Fucking stay home if you just came to stare with resting dick face and try to act cool.

Are there big dreams of going on a Thrasher Skate Rock trip?

M: Nah. just kidding. Oh, wow—fuck yeah. I’ve done a few Thrasher shows and its always epic! Also been on King of the Road for a few parts, so actually being on a Thrasher tour would be going full circle, if that makes any sense. Holy crap, yes we have giant dreams and daydreams of going on a Skate Rock Trip.

F: No way in hell will Pharlee will ever be on Skate Rock!

If you were to record an album, who would you want to jump on backup vocals for at least one song?
M: Oh lawd. In my fantasy it would be Ronnie Van Zant from Skynyrd or Rob Halford from Judas Priest. He could teach me a thing or two about wearing leather. But if I had to choose someone in real life it’d be Isaiah Mitchell. His vocals in Golden Void are out of control. I’d probably just want to do back up for him.
F: Definitely Meatball on vocals, if needed.

Future plans or goals?
M: Been talking to some people about a Mexico tour. I’m from Argentina, so if that goes well we could actually go on a South America tour and my family could finally see me on stage. They’ll be able to see that I’m actually doing something productive with my life and maybe they’ll stop yelling at me to be a doctor or something like that. Also, recording an album. We recorded an album with Gabe Messer but we do need to get something not as homemade. Love ya, Gabe!
F: Stayin’ alive long enough to hit the other side of the world with this. Whatever ya gotta do to stay on the road. Hopefully make it on  Disney channel.