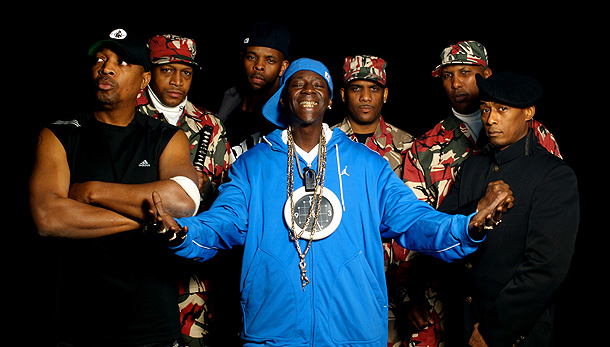 "music is the one thing that brings the human race together"

I was two years old when Def Jam released Public Enemy’s Yo! Bum Rush the Show, the record that introduced the masses to a stern, socially aware, and outspoken emcee, Chuck D. With his seeming antithesis, the vibrant, well-intentioned Flavor Flav, Public Enemy hasn’t lost focus over the course of their eight albums and three Bush presidential terms. America’s ongoing humanitarian and political ineptitude has fueled the fire since the Iran/Contra affair, and Chuck D remains the foremost lyrical documentarian of America’s inequities. Meanwhile, he’s been busy adopting new music distribution technologies, harnessing the power of the Internet prior to Napster’s launch. He has remained relevant as well as progressive while simultaneously co-producing groundbreaking albums from Ice Cube and Bell Biv DeVoe as a member of the Bomb Squad. Later, they single-handedly assimilated heavy metal and rap by collaborating with Anthrax long before Fred Durst could even grow his douche goatee. All that said, I was more than willing to chat with the only man important enough to sue Biggie Smalls.

Twenty years later, the fight continues. Public Enemy has maintained a consistent position over the past few decades. Do you feel like a younger audience is still listening and can take something from your music?
I think it’s there for a younger audience to check out, and it’s easier for them to check it out, but I would also add to it the fact that the world’s a little bit crazier than it was 20 years ago. Not a lot, but that said, a lot of the older songs are relevant to what’s going on right now. Over a 20-year period over 15 albums, a lot of the things have been said. So even leading up to now, a person who wanted to catch up, our albums from three or four years ago can bring them up to speed. I’m a big fan of Dylan and Sly and the Family Stone, whose lyrics are timeless. The lyrics and the music, if they happen to work well together, can always catch people at a different time.

What role do you think rap music should play in the lives of young people?
It can play a lot of different, diverse roles. It’s a diverse music. It can have a lot of different character assessments in it from the good to the bad, A to the Z.

How far do you think the quality of life of black people has advanced since Fear of a Black Planet?
I think the quality of life for black people has increased and decreased. Increasing in the fact that more things are accessible, but also less of ourselves is accessible. What I mean by that is, there are just things that require we have some kind of knowledge of self and community to be able to withstand some of these social pressures. I think we have more disunity as a people than we had 20 years ago, or since Fear of a Black Planet.

What do you think is the biggest threat to young people, currently?
Fallacies. Illusions. Promises that aren’t kept by higher structures and higher orders, and when people feel like everything’s cool and safe when it actually isn’t. There’s a severe problem if anybody limits themselves to their one country. I think whether it’s black youth or societies of many colors, I think countries and borders limit people from being people. It really limits the human race from truly being the one race. That’s why I do culture and music, because music is the one thing that brings the human race together for our similarities and knocks aside the differences.

Why do you think that the pillars of positive black leadership in this country are primarily religious figures?
Well, they realize there has always been power in the black church, because it’s always been able to gather a lot of people into one area. I think a lot of the great speakers are bold and brave enough to know that they have some sort of structure, some backing.

Are you particularly religious?
No, I’m spiritual. Treat others like you would like to be treated, and take care of this planet that we live on because we only got one.

Do you endorse any presidential candidate?
Not yet.

Are you yet to be convinced?
It has nothing to do with convincing; I’m just totally discouraged with a two-party system.

Any prospective plans for a political career in the future?
No. I’d love to be a cultural ambassador somewhere, maybe a poet laureate of some state, but that’s as far as my aspirations in politics go. Media technologist! I try to hijack media and try to spread communication to the masses.

Russell Simmons and Master P recently encouraged people to stop using certain reprehensible words in their music. It’s got to feel good to have people like that in your corner on issues of that nature.
It’s not just my corner. I think it’s the attitude that you have to work at dissipating, before the word. There’re a lot of words that really can’t be removed; the N word isn’t a word that can be removed. But it could be treated as a curse word. I curse, and sometimes I might pull out the N word, but never as a word of love.

Does it bother you that a lot of people my age had never heard of Flavor Flav until he became this all-encompassing VH1 media presence?
No, not at all. There always has to be a first time for something. You fell in love the first time and no one held it against you before that. Flav is as much a part of Public Enemy as I am. I tell everybody, “We’re a group.” Whichever way, whichever porthole it happens to be to recognize the family, so be it. Flavor Flav is a fantastic dude.

How has it affected your album sales?
I don’t know; I don’t count records. I make them. I never counted them. I just do them. Flavor’s fame is television, and I know TV’s one thing but records are a whole other thing. We’re sitting in the Apple store right now, which is a great determiner of how people get another batch of music. I have too much; it’s too congested for me to pick out how people get what. As long we make things available, that’s key.

Unlike a lot of older artists, your sound has changed appropriately over the years.
Our sound’s always changed. There have never been two Public Enemy records alike. Maybe we’re growing, maybe not. We progress and we regress, but we make sure that all of that’s doable.

Is the goal to reach new audiences now?
It depends on the technology. I think the saving grace of Public Enemy over 20 years is the thorough use of our passports and never limiting ourselves to one country. That was realized in November of 1987.

They used to play “Fight the Power” on Yo! MTV Raps when I was really little. Being that meaningful music has sort of retreated from the mainstream, are you exercising any other tools to get the message across to Americans?
All of the above. I’m way beyond America, and I’m way beyond just me. You want to inspire people to step forward, and new technology and new media outlets are very important.

What artists were particularly relevant in 2007? Who’s speaking to you now?
The usual suspects are the Roots. I love their daring approach. And you have Talib Kweli, Common, Lupe Fiasco, Immortal Technique—you have artists like that. Also, I have my label, Slam Jam, so I like to concentrate on them and stay a little more in their direction, too. That’s where I’m spending most of my time. And there’s many artists on MySpace.com.

Do you seek out new talent on MySpace quite a bit?
Yes, but I’ve had Rapstation.com for the last 10 years, which was kind of a precursor to MySpace. It’s been a fantastic breeding ground for people to do their thing.

The Bomb Squad kind of linked up both coasts really early on. You guys did Amerikkka’s Most Wanted with Ice Cube, who had a really radical approach to some of the same issues. How did you feel about that?
I’m a member of the Bomb Squad so when we reached out and got Cube, it was a conversation that brought him in. I believe that everything should be said; everything needs balance, and I think when we were able to get with Ice Cube on Amerikkka’s Most Wanted it was balance.

Pharaoh Monch recently covered “Welcome to the Terrordome.” That was rad. Yeah!
There’re a lot of emcees that I respect, and he’s definitely one of them. As far as a rap group, it’s uncanny to be covered as much as we’ve been covered. I think six times as much as whoever’s next.