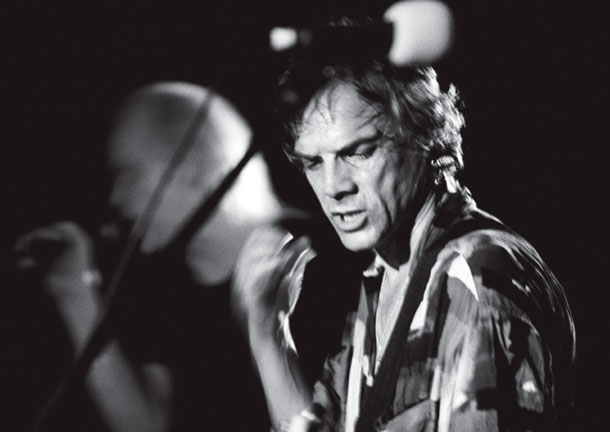 "When punk rock came in we were already established as a band."
Interview & Photo by Wez Lundry

I’m not sure how it happened, but a couple weeks ago I was talking to a friend about Radio Birdman, and said how cool it would be if they were to play in the United States. A week later I see a flier advertising their show in Seattle—their first-ever trip to play in the US. The usual trepidation set in: “What if it’s just a shitty nostalgia act and they suck live now, and then my opinion of one of my favorite bands of all time is shattered?” I reasoned that they’d have to suck pretty hard to blow it, and figured that was near impossible.

I was right. It must have been tough for the opening bands, ’cause people were there to see t
he headliners. Radio Birdman has an almost cult-like following of fans. Despite being one of the most influential bands of the mid-1970s and perhaps the greatest band to come out of Australia, their music wasn’t well known until Sub Pop released a greatest hits record a couple years ago. In their first years of activity, 1974 to 1978, they blazed their own trail and were truly DIY. When local clubs refused to book them, they bought their own and promoted the kind of music they liked. They also played music that wasn’t easy to categorize, just hard driving and different from all of the pap that came out in the ’70s. They only released one LP, and then another posthumously in 1981, due to problems with their label’s promotion and distribution. Bootlegs appeared, followed by the Under the Ashes box set a few years later. But if you could find their stuff—you were hooked. When the band took to the stage, people thronged the front waving fists in the air and singing along to all of the older songs. The band belted them out, including some new tunes with the kind of aggression rarely seen in bands 30 years their junior. Before the show, I sat down and talked with three of the original members, vocalist Rob Younger, and guitarists Deniz Tek and Chris Masuak. Pip Hoyle, keyboards, rounds out the rest of the original line up, and Jim Dickson and Russell Hopkinson handle bass and drum duties, respectively.

Why did mainstream music suck so bad in the mid and late 1970s?
Rob Younger: The stuff that was rocking and melodic was forced underground. Deniz Tek: Up until the late 1960s, the business side of the industry was run by people who liked music, so there was a degree of edginess and people were willing to take risks. By the early 1970s it was all accountants and business suits that cared only if the music sold as a product. They looked for safer music when money became the raison d’etre. You had to go underground to find the good stuff.

Did people like Seymour Stein from Sire Records change that?
Deniz: Yes, and he came from the earlier time when it was more exciting. And he was trying to bring that ideal back. He succeeded to a degree, starting with bands like the Ramones.

Radio Birdman has certainly been an influence on harder rocking punk bands, but eschewed the punk rock label. Why?
Rob: When punk rock came in we were already established as a band. People latched that label on to us, and it was to our advantage, and it was only natural to pick up that kind of stuff. But punk rock was widely different then, with bands like the Damned, the Ramones,  X-Ray Spex, the Sex Pistols, the Clash; they all had widely divergent sounds.

Deniz, did you see the MC5 play a lot while growing up in Detroit?
Deniz: There were lots of concerts in parks. I started seeing them in 1968. The West Park concerts featured mostly local bands, the Stooges, SRC, the Amboy Dukes, Bob Seger before he got famous. Then they started bringing in bands from out of town. I played with the MC5 on the Australian and Asian legs of their recent tours. I’ve also been playing music with Art and Steve Godoy recently.

“Aloha Steve and Danno” is a great tune about Hawaii 5-0. If you could write a song about a TV show today, what would it be?
Rob: I can’t really think of a show I would want to write a song about. Funny thing is, I wrote that song after the first time I saw Hawaii 5-0, and the song follows the plot line of that episode.

Why did the band decide to reform?
Rob: We got an offer to do the Big Day Out (Australian music festival). We wound up doing a bunch of shows, so we stuck together. And they threw a lot of money at us—and I was broke.
Deniz: We’d all been playing in other projects, sometimes with some of us together, so we were already interacting musically. It just seemed natural. The offer to tour is what nailed it.

I’ve seen some great, old video footage of you guys on an Australian TV show. There were a couple punk-looking types slamming around in the front, and some longhaired types rocking out as well, a mixed crowd. What are the crowds like these days?
Deniz: It’s a mix. Multigenerational.
Rob: It’s a wide age group, and clothing styles as well. Some people come and bring their kids. Oddly, there are more young girls. Maybe they don’t perceive us as much of a threat anymore. Deniz: Or maybe they think we’ve been around long enough to actually have some money.  We’re better known in the US now; the Sub Pop release helped with that. Prior to that, you had to really be an enthusiast, and seek out our records. The Sub Pop record made it easier to find our stuff.

You guys sing some great songs about cars. What kind of cars did you have in the ’70s?
Rob: I never had a car or a license. I still don’t.
Deniz: Ready for this? I had a ’68 Dodge Charger, a ’67 Firebird, a ’72 Olds Cutlass S, an Australian Ford Falcon, and we had a Ford transit van.

Should rock and roll music have any purpose other than to entertain?
Deniz: It’s an outlet for expression for musicians. When I was a kid I found it very motivating. Chris: It’s an expression of energies. It sounds silly, but music is coalescing and collecting all  kinds of energies and providing a medium that  they can attach to. It’s always moved me more  than entertained me.