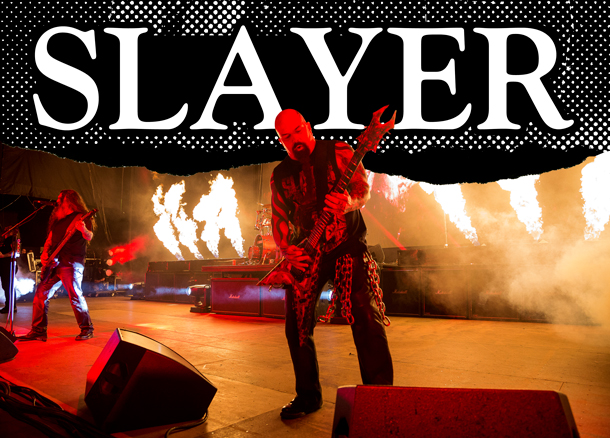 Nothing can stop Slayer. Since their last album, World Painted Blood, they’ve been put to the test and came out triumphant with 12 unapologetic tracks under the album name, Repentless. Gary Holt of Exodus has joined the band full time since the passing of the founding member Jeff Hanneman. Their live show is as heavy as ever, complete with inverted-cross fireballs. Neckface and I crept backstage on a recent tour to talk to guitarist Kerry King about what’s been up. —Jordan Joseffer

First off, Repentless sounds awesome. I was just listening to it the other day. You guys went through a lot since the last album but how does it feel putting out the 11th album now? Like, still after 30 years, you know?
When you put a time frame on it it’s, like, man, we only did 11 records in 30 years? We suck. I remember when you were a kid, you know, records come out every one year or two years. And even when we had our first five albums they were out every year or two. But this one, you know, it’s the biggest gap we’ve had between records but the biggest pile of adversity that we’ve had in between records, so yeah, it took a while to get it back on the tracks but the product that you heard that’s getting ready to be put out in September, I couldn’t be prouder.

How is it with Gary Holt full time now? Is he bringing Exodus flavor to the band?
Just by being there, yeah. I mean, I hear it. That’s probably the biggest change in seeing Slayer live right now. It’s not a cross between Slayer and Exodus by any means, but you definitely hear the Slayer guitar coming from me and you hear the Exodus sound playing Slayer riffs on the other side. There might be a little bit of a different dynamic, but I don’t think it’s that huge.

Jeff Hanneman isn’t on the record at all but he did help write a couple songs, right?
One song’s his, yeah: “Piano Wire.”

“Piano Wire,” that’s right. Why drop the album on September 11th?
You know, believe it or not, it’s a complete fucking coincidence. I thought up until about a month ago that it was still going to be an August release but then I was talking to my manager one day and he said, “Yeah, we’ve got a release date, September 11th.” And I went, “That’s odd.” And ironic as hell, and when I thought more about it since then it’s like the last record Paul played on came out on September 11th and then the next one he played on came out September 11th, so it’s like a gap in time that didn’t exist. Weird.

Do you think putting a brand new Slayer album out on that day has an impact on people when they listen to it?
It may. You know, I didn’t even realize September 11th was a release date this year until somebody told me. I don’t think it’s happened yet but I think pretty soon it switches to Friday release dates, where historically it’s been on Tuesdays.

I don’t really know shit about religion, but does repentless pretty much mean no regrets or no apologies to God?
It’s just, you know when I made it up, I didn’t know I made it up. I thought it was a word. So I went and looked it up and found out it wasn’t a word. But usually, if there’s a word that’s been completely made up you gotta ask somebody what it means. And this one you don’t really have to; it’s basically like repentless—I have no regrets for anything I’ve done, ever. It’s the way I think Slayer looks at things.

Slayer’s been a huge part of the timeless soundtrack to skateboarding. What do you think about skating?
I just saw Danny Way two days ago and I hadn’t seen him in probably eight years. It was so funny, when I gave him my phone number, my name came up in his phone. He had it and didn’t realize he still had it. We just ran in different circles for a while. But he was telling me about some crazy gigantic ramp he built and I’m, like, “Of course you did. You always build those crazy fucking ramps.” I love it. I love being tightly perceived by X Gamers in general, you know, not just skateboard but the BMX crowd, the moto crowd, you know? It’s cool to be a part of that because I really enjoy all the aspects of the X Games. 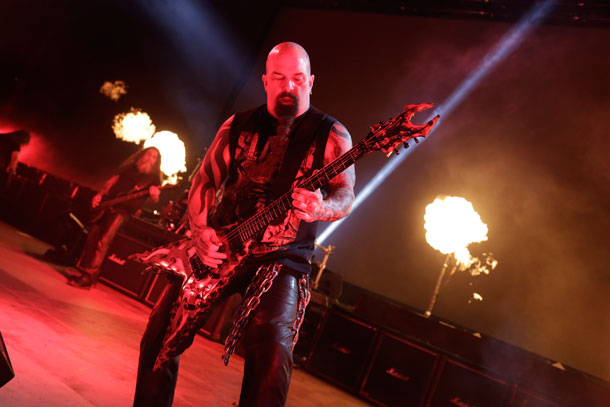 Neckface: You can’t be getting ready to jump the Great Wall of China and be listening to, like, Bob Dylan or Neil Young or some shit. Slayer is the soundtrack for when you want to get it going. That’s what you put on.
Yeah, totally. I mean, this is the first time I haven’t done a signing on Mayhem. I did the past two days. I’m not doing one today but, you know, almost every time I do a signing I’ll get military that say, “Dude, we blast your stuff when we’re going out and doing what we gotta do.” You know? And it’s really cool to be a part of the skate community, part of the X Games community and a part of the military. That’s satisfying, you know? Whether I believe they should be there doing what they’re doing or not, at least I’m helping them get through their day.

The CIA used Metallica to interrogate the terrorists. Do you think Slayer would have been a better fit?
Absolutely. I love the Metallica boys but we’re definitely scarier.

I know that they were kind of bummed about that, but would you be stoked if they were blasting “Angel of Death” instead?
I don’t really see the benefit of using music to torture somebody.

Well, they also played Britney Spears, so that might do it, too.
Well, yeah. I don’t understand that. I mean, I understand when people are out doing drills and running and they’ve got speakers, it’s almost like their anthem music, you know, going out there. I get that.

So you guys are about to play with King Diamond right now. Who’s more evil?
King Diamond’s a nice guy. It’s hard to say. I was talking to him yesterday. They sound, in particular, him, the King himself, he sounds really good. If you like Mercyful Fate, you like King Diamond. He sounds exactly like you want him to sound. Who’s more evil? Well, I’ll let you guys decide. King Diamond has upside down crosses painted on his face. I got ‘em tattooed on my arm. I think I win.

What’s up with Coldcock Whiskey?
It’s something that, like, we did the Jägermeister Music Tour in ‘03, ‘04 and 2010 and the marketing director of the tour became a good friend of mine. He and his assistant left Jägermeister about four years ago and they had a no-compete clause so they couldn’t do anything. So they were establishing this whiskey during that time that they couldn’t do anything. They put it out and they were looking for investors and number one, they’re friends of mine, number two they don’t know how to fail and number three, I’m not a whiskey guy and it tastes good. I like it.

What do you think happens after you die?
You either get incinerated or you get to be worm food. I’m not a believer in anything beyond that.

Kinda like how you talked about people listening to Slayer to get pumped up to go to war and stuff like that, if you have to pick a five-song set list for someone to take to the battlefield, what would it be?
“War Ensemble,” “Angel of Death,” “Raining Blood,” “Hate Worldwide.” Listen to the anger coming out of my voice. And “Chemical Warfare.”

Neckface: That’s pretty much the soundtrack when everyone’s trying to fuckin’ get gnarly on a skateboard. It’s a war on your own body.