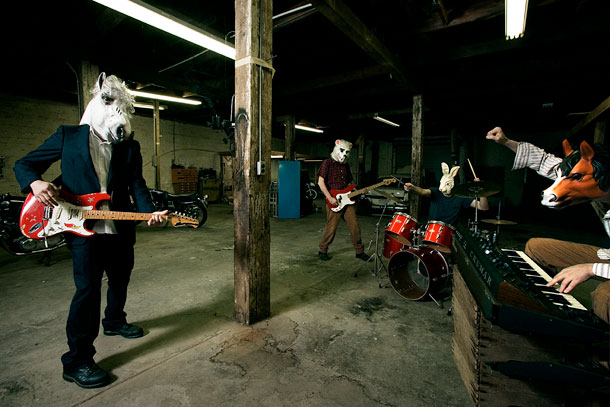 by Kaleb Gay | Photo by Saccenti

Before we even began to discuss Mark Linkous’ decade-plus career as Sparklehorse, I apologized in advance for his two day press outing.

“Oh, it’s all just part of the job,” Mark calmly replies, “I’m sure there are some critics out there who just can’t wait to rag on Sparklehorse.” Mister Linkous was in New York City at the beginning of a crippling heat wave to inform the willing of his anticipated new LP, Dreamt For Lightyears In The Belly Of A Mountain. An album five years in the making, it features collaborations from previous contributor Tom Waits, Mark’s own siblings (brother Matt and Linkous’ sister-in-law), and a particularly hot commodity known as Brian Burton—or, to the masses, Danger Mouse.

Fear not keepers of the Painbird Society—Dreamt For Lightyears is as much a Sparklehorse album as our waiting and wanting minds could ever, well, dream of receiving. Did you ever hear the one about the man who was never fit to be bothered by suit and tie execs looking for that radio hit, and made the personal step down from a major label (Capitol) to their more spirited summer home (Astralwerks)? This is it. When a man with Linkous’ creative capacity has a clear vision and cautiously cultivates it to keep his integrity intact, we should all be thankful.

One of the many great things about Sparklehorse is that his introduction to us (“Homecoming Queen,” Vivadixiesubmarinetransmissionplot, Capitol, 1995)—in just over the opening minute—quotes Shakespeare (King Richard III), speaks of horses, and burns up a pack of sparklers to prevent their decay. At that very moment, an eternal relationship between the listener and Sparklehorse is kindled, and Linkous has always lived up to his imaginative first impression.

1998 saw the second long player from Sparklehorse in Good Morning Spider—an album that held secrets to the lives of insects, the night sky, kamikaze hummingbirds, hundreds of sparrows and, fittingly enough, horses. This was the defining album of survival Linkous admits was his most accomplished outing to date. Recorded almost entirely by Mark at his Virginia home, Good Morning Spider found him at the dawn of a new life.

2001 ushered in the release of Sparklehorse’s third LP, It’s A Wonderful Life. With this masterpiece, Linkous and his friends (joined by Tom Waits and Nina Pearsson, amongst others) introduced us to a ghost of the sky, the king of nails, witches returning to their “sticky tree knots,” and a sea of teeth. It’s A Wonderful Life secured a top spot in Mojo’s Top Albums of 2001, where they—along with many of us—deemed the album “sensational.”

Over the next five years, Mark would offer his skilled hands in producing a number of projects, including Nina Pearsson’s CAMP and a tribute to Daniel Johnston, where The Flaming Lips joined Linkous to reconstruct Johnston’s “Go.” Los Angeles would also have a walk-on role for Mark and his songwriting, as 2003’s Laurel Canyon featured renditions of the classic song “Someday I Will Treat You Good” (from 1995’s Vivadixiesubmarinetransmissionplot) and the previously unreleased song “Shade and Honey” (a standout track on Dreamt For Lightyears).

“I’ve never seen the movie,” added Mark. “I just happened to be in Los Angeles and they asked me to come down to the set. I was really interested in meeting Frances McDormand and giving her a Sparklehorse CD so that I could say there was an album of mine in the Coen’s house. And when I went down there and met her to give her a CD, they just put me in the scene—totally unexpected.”

Linkous also brought mention to events that redirected each of our lives: September 11, 2001. “After It’s A Wonderful Life was released, then 9/11 happened, and all the shit with the Bush administration, I just thought that music seemed futile—just really insignificant. I lost a lot of motivation, and got really depressed for a long time, which is why I guess it took so long to make this album. I just didn’t work for a long time.”

He now resides atop a mountain in the dense Southern Appalachian Mountains of North Carolina with his wife Theresa. This location, home of the Great Smoky Mountains National Park, encompasses over eight hundred square miles and remains ninety-five percent naturally forested. This influenced much of the content on the appropriately named Dreamt For Lightyears In The Belly Of A Mountain.

“We lived on this two-hundred-year-old plantation in Virginia. There was so much clear cutting in that area—and droughts. One of the trade-offs about North Carolina is that it hasn’t been populated as much as Virginia has, and there’s a lot of wild land with the National Forest.”

Dreamt becomes the debut release for Mark on Astralwerks, a subsidiary of Capitol Records—home to the three US releases thus far. For fans, this looks like an unconventional shift for an artist as appreciated as Linkous.

“It was an amicable move. Everyone realized it was best for Sparklehorse this time around. I like so many of the bands on the label. Capitol have been good to me as far as leaving me alone to, basically, do what I do.”

What he “does” is a technique he can call his own. From the gasoline horseys who took us away on Vivadixie…, the painbirds of Good Morning Spider, through to that big old bear (born with honey in his hair) on Dreamt For Lightyears, each release brings tales of the greenest lands, the thickest of woods, and the sacred stories of survival whispered throughout.

“It happens every record. I’m not aware of it as a substantial theme on the things I record,” Mark adds. “But the move from Virginia to North Carolina—this area is beautiful. It rains and you can smell the earth. There are creeks and rivers. We live on top of a mountain and it is so high that your ears pop halfway up. There’s bears up there—I got trapped in the house one day by a bear. My dog’s been bitten twice by rattlesnakes.”

Yes, the dog survived. After all, it is a wonderful life.

Throughout my half hour talk with Mark, he seemed somewhat careful of the words he chose when replying to my childlike questions. Between the moments of contemplative silence, he was most candid when speaking of his environment or trying to remember the name of the band responsible for “Hang On Loosely” (later pegged as .38 Special.) There’s undoubtedly a veil of mystery—some may call it a casual darkness—masking the man responsible for many of our favorite anthems. Like a solitary creature compelled to keep the steadily shrinking forests nurtured and lush, it seems that Linkous would much rather burrow into the confines of his mountainous home—creating the sweetest music ever heard—as opposed to answering the call of these beasts known as man.