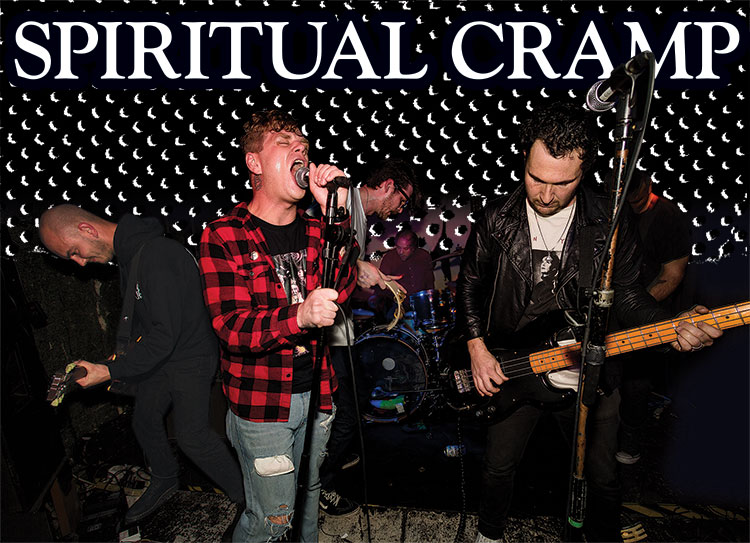 Spiritual Cramp has an overwhelming stage presence and the licks to back it up. React! Records just released their debut EP, Mass Hysteria, with four tracks about life problems and city living. I sat down curbside with Michael Bingham (vocals) and Stewart Kuhlo (guitar) on San Francisco’s Mission St. to talk about the band. —Jordan Joseffer

Are you guys named after the Christian Death song?
Michael: Yes, we are. Actually, we had a different band name picked out and someone vetoed it. My friend was, like, “Yo, you should name your band Spirtual Cramp. I’ve always wanted to name a punk band that.” And we all thought that was a sick reference.
Stewart: Yeah, I think Christian Death is cool and shit but it’s more like what those words literally mean together. That’s what the band is about versus being influenced by Christian Death.

You guys were in other hardcore bands. What was the concept going into this project?
S: Mike and I met because we were into the same shit and knew some people. He hit up the bassist, Michael Fenton, who wrote all of the songs and it just sort of came together that way. Really just as a way to express something that Mike felt wasn’t being talked about in the music that he was listening to. People view people in bands on pedestals and think they have their shit going for them. That’s not the reality. We are all fucked up.
M: Absolutely. I just want fools to know that I’m fucked up. You see all of these fools on the Internet and everyone looks like their shit is so sick and it’s not that sick. No one’s that sick.

You have a song called “Tenderloin.” How much does living in San Francisco have to do with your song writing?
M: It’s everything. I lived in a small town my whole life and moved here three years ago and it changed my whole life, man. It’s everything to me; it’s like a whole new world for me. That song is about finding a gun on Polk street.

How imperative is the tambourine?
M: So imperative! It’s a must have for the vibe.

Do you see the lineup evolving into an even bigger band with more instruments? Xylophone, synths?
M: Our friend is singing a song with us tonight. We played at the UC theater the other night and we had, like, 11 people on stage for the last song. We smoked a joint on stage and everyone had percussions and we were just jamming out.
S: Yeah, I think ultimately it’s about community. Like, San Francisco is important to us but so are all of the people that we know and that are involved in the community. So if the band was to expand it would be with people that we know and we love. We’re not trying to be a novelty. It’s about involving creative people that you respect.

I want to read you a recent quote from Bono in Rolling Stone: “Music has gotten very girly. And there are some good things about that, but hip-hop is the only place for young male anger at the moment—and that’s not good.” How would you respond?
M: That’s wack, dog. That’s so fucking wack. Tell that fool to fuck off.
S: Yo, man, it’s easy to be a millionaire and be an outsider and judge some shit. There is a place for female expression in every form of music and art, period.
M: You can be whoever you want to be. You can be angry; you can be happy; it doesn’t matter.
S: The perfect meme for this would be, “Bono, listens to Cardi B once.”

What are you guys up to in 2018?
M: We’re going on tour with American Nightmare, Pissed Jeans and No Warning in the spring. We have another EP that we recorded that’ll probably come out in the summer. We are trying to tour as hard as possible with only dope bands.

Anything else you’d like to say?
M: Fuck the police; fuck the government;  fuck everything.