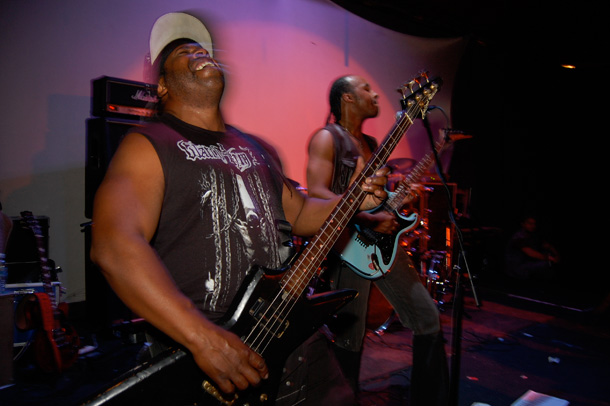 "we didn’t fit in, we were outcasts"

Hunters Point in San Francisco has produced very few rockers, let alone  rock bands. But somehow Michael Coffey, Anthony Starks, and Darren Tompkins came together from the same neighborhood in June 1978 to form Stone Vengeance. Mike plays guitar, Anthony bass, and Darren drums, while all three contribute vocals. They’re one of the first metal bands with all black members, and are still tearing it up to date. I spoke to them at a show while Reagan Youth opened.

You’ve been doing this a long time. How does it feel to still be going out and playing shows?
Mike: I’m getting too old for this shit.
Darren: It’s cool. A lot of young kids are starting to listen to our stuff and are supporting us. The last few shows, there have been a lot of youngsters. When we first started playing they weren’t even born.
Mike: It’s really a surprise to me and refreshing to see 14, 18, 23 year olds, plus the old school people. I had no idea that young people like that would even be into this music but they come and it amazes me, man. We like the kind of music that we play, that’s the only way we have survived.
How has the scene changed from when you guys first began ’til now?
Mike: Now it’s a lot more open and a lot more young people are into it, because when we first started off there weren’t a lot of blacks playing rock so we were definitely strange. We were like that square peg trying to go in a round hole, and I knew that we would be perceived differently from the outset. There were good things then and the  scene was very strong, and now it’s in pockets.  You got people that are into it, but it doesn’t seem like a cohesive scene. It’s a lot more open with a lot more nationalities, though. When we travel around the country we see that people are still into this shit, man, and they respond to the old school shit. 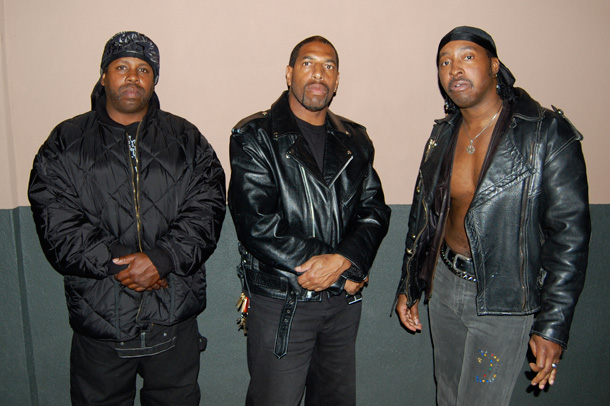 What was it like being from one of the toughest neighborhoods in The City and playing metal?
Darren: Man, you get strange looks. People were like, “You play what? Nah, man, you from Hunters Point. What you doing playing that?”
Mike: And we didn’t give a fuck. Back in the day we’d go to Third and Oakdale, the heart of Bayview, and sing some Venom and Raven, screaming all over; we didn’t care. But now when I look back at that I don’t know how the hell we did it. There were always some black people in the hood that could dig it. Of course we didn’t fit in, we were outcasts, man. Definitely Stone Vengeance is outlaws.
Darren: Just like at this festival where everybody was playing R&B—you had six or seven different bands playing the same songs as everybody else, and then we came up playing hard rock. That was unheard of. A lot of people came up to us after and said, “Man y’all sound good.”

You guys ever hang out at that old skatepark on the hill, the Dish?
Mike: I didn’t know it was called that. We called it the Sundial. I‘ve been up there. I used to go up there to knock out some drawlas a few times late night.

What do you think of those Norwegian bands claiming the title black metal?
Mike: Anybody can see Stone Vengeance and see that we own that title, if you want to call it black metal. The kings of black metal are fucking Venom. I like all kinds of different music, but I was there when nobody was doing what Venom was doing.  We could say Black Sabbath, but they weren’t satanic. Black Sabbath is heavy as hell, you aren’t going to top that, but Venom are the black metal gods. I don’t know about those Norwegian bands, they kick ass—but Venom… I’ll put some Mercyful Fate in there, too. Nobody was sounding like Mercyful Fate either.

Do you have any new albums in the works?
Mike: Yeah, that’s why I’ve been trying to slow down from playing so much, so we can concentrate on our new songs. Anthony and me are getting all the songs we want on the next record together.

Any other words?
Mike: We hope these young cats keep coming to see us and listen to the good shit. Hopefully they’ll start bands. I tell bands not to feel like they have to compete with other bands. Listen to good music, because all of us old cats are going to have to sit down sooner or later. I’m seeing some good shit coming from the young bands. There’s lot of truth  to that shit.
© 1981–2023 High Speed Productions, Inc.