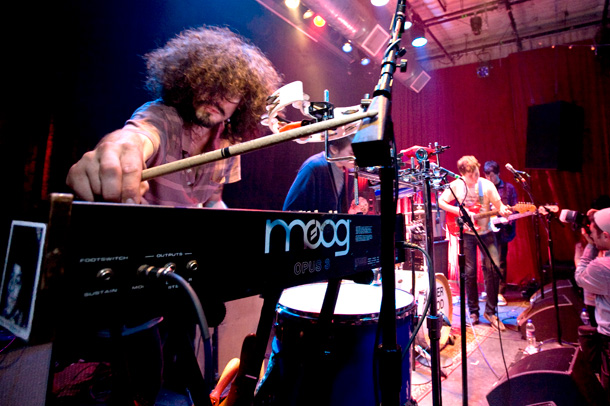 It’s a brave new world and there’s nothing to be scared of. As if it wasn’t already painfully obvious, the tired conversation about how the Internet’s going to shape the music industry is dead and over. Surfer Blood  is of a new generation of bands that don’t have the good old days to whine nostalgically about, and have fully embraced the world as it is today.  Low and behold, it’s working out for them very nicely. Surfer Blood consist  of Thomas Fekete, Tyler Schwarz, Marcos Marchesani, John Paul Pitts,  and Brian Black. Their debut album, Astro Coast, is out on Kanine Records.

I’m just trying to get the time line right—it didn’t look like you guys had done that much, and then all of the sudden there was this tidal wave of touring and blogging and Pitchfork and CMJ.
JP: The record has been done for about six months. We spent forever tweaking it and then one day they had an intervention and said, “Okay JP, you need to stop turning knobs.  It sounds great, let’s just put it out.”
Tom: JP would kind of disappear for a while, sat in his cave on Adoral tweaking shit.
Every day I’d hear a different version and finally we decided it’s done.

But the band isn’t even that old.  Like, it isn’t much older than the album.
JP: Some of these songs go back as early as 2006, but it started coming together around January of this year. We started recording  hard in my apartment whenever we got the chance. We’ve never really legitimately released anything before. We got together with the mind-set that we were going to tour;  we’re going to put this record out and that’s it, that’s what we we’re going to do.

That was driven and purposeful?
Tom: Yeah. We did this 30-date self-booked tour. By the time we were in New York, Pitchfork had forecasted us. It was just crazy. We played the Charleston in New York to  like two people and then the next night we  had like 75 or 80 people there because Pitchfork had written about us. Then we  met our label, Kanine. They don’t have a  huge roster so they aren’t completely overwhelmed. We met with Columbia records and all these other people, but we were like, “Fuck all that.”
JP: When we met with Columbia, we walked into the office and automatically we were like, “This isn’t for us. I seriously doubt this guy even likes this type of music or would know how to market this type of music.”
Tom: There’s a band from West Palm who’s signed to Columbia that has contractual haircuts. I’m dead serious. This one band has contracts that say they have to get their  hair cut. They have to use a certain acne medication, like really strong acne medication.

Because they want to be heartthrobs?
Tom: Yeah, and I’m pretty sure they have to eat Burger King on tour because Burger King somehow sponsors them.

So they have the acne medication to counteract the Burger King.
JP: It seems really defeatist from the start; kind of poorly thought out.

Since you guys don’t have the good old days to reminisce about and this is what the music industry is going to be like,  are there things that you like about it?
JP: It’s a double-edged sword. Everyone downloads music illegally, and because they do, you go to a show and you see 15 kids in the front row singing every word to your song.  And I know I didn’t sell a CD to those people—our record’s not out yet. How did they happen to know the words to all these songs?
Tom: Not to mention there’s a ton of really rad bands that are touring now and getting signed, it’s just stuff that you would never really imagine. You definitely have to work harder,  but touring is what we like to do.
JP: You can bitch or make the best of it.
Tom: We like to tour, and that’s how we’re going to make a living.

That and vinyl sales.
Tom: Here’s the craziest shit—we played a show and one person saw us and Twittered about us, and that guy happened to know someone at Pitchfork and they read the Twitter. Then the next day we got label offers. So that can happen now.