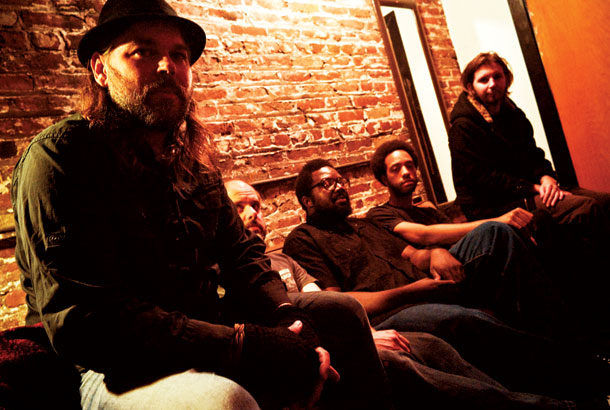 "I feel I'm in my own reality, at times. That's just what artist have to do"

Pall Jenkins used to be a wrestler. Not the kind where you smack people in the head with folding chairs on TV, but the kind in high school gyms with blue mats on the floor. When he discovered there was a conspiracy—led by his coach—to get him to cut his hair, he quit the team in disgust.

Ever since then he’s lived on the fringe, scratching out an existence in music for nearly  20 years—first in Three Mile Pilot, and for the last 13 in the Black Heart Procession, along with multi-instrumentalist Tobias Nathaniel and a rotating cast of talents. After releasing their sixth album, entitled Six in late 2009,  they toured the US and much of Europe. I was lucky enough to tag along on the US tour as part of the opening band, The Mumlers.  We were supposed to do this interview then but never got around to it. After we parted,

I tried for months to get him to answer a few questions by email—every month or so he’d surprise me with a cryptic note about playing  a show under a volcano in Sicily, or problems with the IRS, or a dream involving red tights and raincoats…but never any answers to my questions. Four months later, when I’d all but given up on ever sharing the magic of this band with the readers of Thrasher, Pall delivered a suplex to my consciousness by answering my silly questions.

I heard you had some run-ins with police dogs on a recent tour. What happened with that?
Yeah, we got pulled over twice: Once in Arizona, and it happened again when we were in Texas. They took us out of the van, searched us with their drug-sniffing dogs,  and then patted us down. That was the part we liked. The thing is, they never find anything. When they asked if we had drugs on us or in the van, and my response was, “No,” they actually asked me if I was calling their dog a liar.

You just released your sixth album as the Black Heart Procession.  Do you feel any pressure from your  past creations when you’re writing  new songs?
Generally not. We just try and write songs that feel good to us, but at the same time,  we always want to make a record that pushes us forward to try new things. Although,  it is valuable to retain certain elements of  your sound.

You told me you’ve always been into a lot of hip-hop, and Toby told me when he grew up he was really into heavy metal…yet for some reason you guys don’t play rap-metal. But there are definitely lots of different kinds of music woven into your songs, which often causes music journalists to try and put bands in stupid boxes. Are there  any descriptions you’ve heard of your music that you find particularly offensive, or wish to dispel?
No, I don’t really care what people write. When they say we’re “dark, spooky, sad and depressing,” I say, “They’re right.” If you don’t like that kind of music, I would recommend passing up our record and listening to something else. We’ll let you know when we get into rap-metal.

Why aren’t you a professional wrestler these days?
My days as a wrestler are over. I wasn’t good enough to go pro. I hurt myself trying.

You have your own recording studio  in San Diego. Why do you prefer to  record yourself?
It’s our own space. You can capture the exact moment you create something or build something up as you see fit, without  the pressure of being on someone else’s clock. I also enjoy recording and producing other bands, so it makes sense to have our own place.

To do what you do—traveling around for months at a time playing songs, and making time to work on new songs— you have to reject lots of life’s normal trappings. Do you feel a separation from reality in that department? Is it hard to deal with?
I feel I’m in my own reality, at times. That’s just what artists have to do. Yet, then there’s a time when you’re expressing it to people live as well; it’s kind of like a constant game of hide and seek.

You grew up skating in San Diego.  For me, growing up skateboarding was kind of like going to school to be a misfit from society. Did you have a similar sort of experience?
I never fit in at school—or even with the skaters, in fact. The most that I skateboarded was usually just to the store to get beer.  I did skate an occasional ditch, but I was never really good. Some of my friends were really good. I was into skating in parking complexes late at night with friends. I still have a board and I still skate to the store  to get beer.

When I watched you guys play live, one thing I noticed was that during the song “Tangled,” which has the line, “Drawn into your web, I’m tangled in your web,” your hands look like tarantulas crawling all over your guitar. Did you do that  on purpose?
Yes, we wrote that part so that my fingers would look strange. All my fingers are triple jointed. I can put my finger in an ear and  it will come out my nose. I just killed three snakes and sewed their tails to my toes. So  I learned to play “Stairway to Heaven” backwards. You should see how that looks. Another thing that looks kinda cool is all  the guys from the Mumlers trying to fit into one pair of pants.
© 1981–2020 High Speed Productions, Inc.