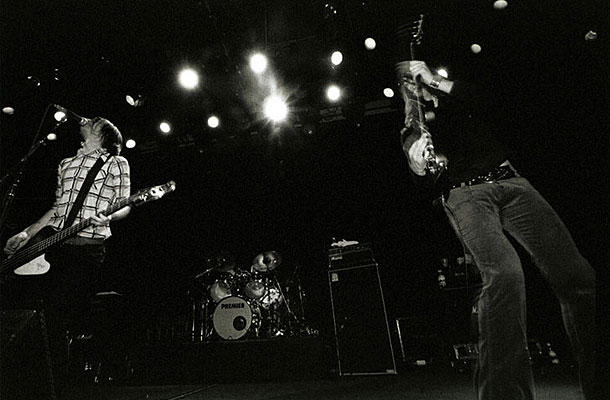 Posted: November 13th, 2004
"...wanting to see shows instead of taking drugs and watching DJ’s for hours and hours."

What have you been doing?
We've been touring a lot and yesterday we just filmed a video in L.A.

For what song?
Motherfucker From Hell, it was a long day. We just played the song over and over and over. We did like ten hours of shooting, but it was good, hopefully it will turn out good.

Are you all from New Zealand?
Yes.

Do you have NZ pride?
New Zealand what?

Pride, do you take pride in your country?
I think we all like being from NZ, but I don’t think we ever said "hey we are the Datsuns and we are from NZ", people just find it out their own way. It has an influence on us, because it is being secluded from the rest of the world. No one really starts a band in NZ to be successful beyond the radio, you just do it for more of the right reasons, that you want to play music with other musicians...but I don’t know if pride is the right word. There are a lot of great bands you'll never hear of.

How long have you been playing together as a band?
Just over 8 1/2 years.

And this new LP is your first LP?
Yeah, its our first LP, but we released a bunch of 7 inches before that in NZ and Australia and we'd sell them at shows, we released em ourselves.

Why do you think now after 8 1/2 years it seems like you are blowing up?
I don’t know. We’ve been working really hard; we've traveled a lot so that a lot of people can see us. But obviously music is such a fashion thing. There are a lot of bands that have been around for a long time that are getting the recognition now. I think people seem to be just getting back into live music and wanting to see shows instead of taking drugs and watching DJ’s for hours and hours.

Strong influences?
We grew up listening to a lot of classic rock music; bands like Deep Purple, the Who, Cheap Trick, Led Zeppelin and a bunch of those classic old rock bands...but we love a lot of music like the Sonics, the Flaming Grooves, we are heavily influenced in them as well. 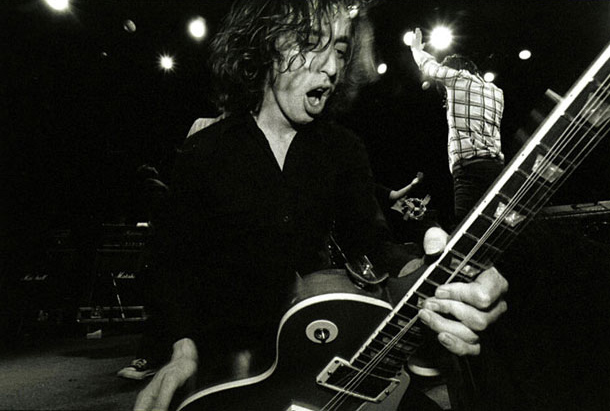 What is the song writing process? Who writes the lyrics and is it before or after the music is composed?
All of the music comes first and then the lyrics come later. Because we are on the road a lot; most of our ideas come from sound checks, we just jam at sound check. If someone has an idea, we will jam on it for a while and see if it works. For us if things don’t work straight away then it's not going to work. Everyone kind of has a short attention span so we know it has to work straight away and we kind of know it, we know it's gonna work. Being on the road is really hard to write new songs. Its definitely more band oriented now. Dolf writes all the lyrics.

Is Dolf sort of a control freak, I read somewhere that he had to have his hands on everything and everyone?
I don’t know if he is a control freak, I think all of us just want everything to be really good. Dolf does a lot of art work as well. For years we've done everything by ourselves, put the record out by ourselves, recorded it by ourselves. You know and now because we cant get that kind of stuff out doesn’t mean that we shouldn’t. Now we have people trying to help us out and making decisions on our work in the studio. We're not being control freaks, we are just being honest, we're just saying we don’t like it and we'll do it ourselves. Were used to doing things on ourselves, I don’t think that control freak is necessarily the right word.

What do you think of the current state of music?
In America, I've been watching MTV a couple of times and people are going all around on this new rock thing...it's all crap though you know, once every two hours there is something decent on TV. I don’t know; people are going on about this new rock revolution, but we don’t really see it. More people are coming to the shows, and that is great. Right now every band gets written about, and people make up their minds about bands just by reading an interview about em or if they look cool. People become big fans of bands before they even hear them. That is why we stay on the road all the time, so people can hear us and see us and make up their own mind on our music.

Do you think you get more buzz in Europe then the States?
I just think it's different. It's a different scene, that’s all. I can’t actually describe it that well. Americans are a lot different then the press in Europe. There's a lot of bands that you would never hear of from Europe that are huge over there. They come over here and play real small clubs. I think that Americans like to know the story a little bit first. There are a lot more crazy fans over in Europe. I think it's stupid that some people wont like something because its not en vogue, they should just put the magazines and TV’s aside and make up their mind on what they like.

What band do you think is getting its just due out of all the so called "cool new bands"?
I think The White Stripes are great people and have great songs. They just released their fourth album and it’s really good. They are one of the few bands that toured New Zealand. Not many bands that we would know about would come to NZ because it's so far away, which is understandable. But I think they are getting the recognition they deserve. I also really like The Hives, The Soundtrack of Our Lives, and a lot of bands that we tour with are really great. There is a good little scene of bands that are touring around at the moment that all gets along really well and are happy to tour together.

Are there any that you think are over rated?
There are, but I can't be bothered. I don’t want to say. If there is a band I don’t like I just don’t listen to them.

Do you have a special relationship with the Von Bondies, I noticed that Marci and Carrie got on stage at your last show in SF and sang a song or two, but their band wasn't even playing.
We toured with them through Europe and the two girls sing on our record, so the song they sing on stage with us is the same song they sing on our record. On tour in Europe they would sing on a song with us and sometimes we would get on stage and play guitar on some of their songs...it's just fun. You know we like to have as much fun as possible. It’s great when you can play with your friends, and they are a great band as well. They are a band that should get more recognition. 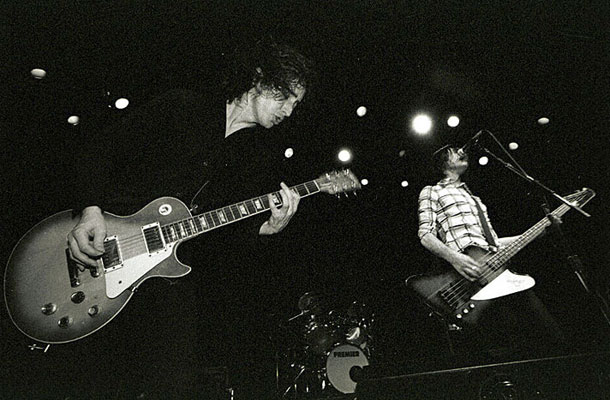 What would be a dream show?
I think Cheap Trick would be a band thing. I don’t know or maybe ACDC. Maybe playing with Led Zeppelin, they just released that live CD, but I don’t think they will ever tour for obvious reasons. I think some of the shows we have been doing like with The Von Bondies or he White Stripes or The Helicopter’s just partying, we make fun of every situation. We are so lucky to do this as a job. When we get to see our friends on the road and do a show with them it makes it more worth it.

What do you think about "selling out", is it something you are aware of and take steps to try and prevent?
We've always just done what we've wanted. What people conceive as selling out, I don’t know. I think people have different terms for "selling out", I think its a really wide area.

I read something about a KFC commercial you did a while back that was kind of a bummer?
We did that about five years ago, coming from NZ we had no money and wanted to put out records and used that to get money to do it. That’s the one thing we don’t like and are not proud of, but that’s how desperate we were. Now when we go out, its not for money, its just like if we like the product or not. Its kind of a weird thing to even talk about because all we are thinking about if playing live shows.

Describe the experience of recording with John Peel?
It was awesome! It's in the studio, the BBC. He just kind of sits in this glass booth and talks to you and you’re in this amazing room that sounds great, it's one of the best studios in the world and you just play songs that he likes to hear. He has his own show. We started playing out like four or five songs and if he likes it he just gets you to keep playing, he kind of talks to you in between songs...you get an amazing recording.

Was that a highlight of your career?
Oh definitely. We followed his career growing up in NZ, we have heaps of albums, you know Peel Sessions...so yeah it was a huge highlight for us, and he was so nice and said good things about the band, it was mind blowing.

Do you worry about your next records and what you're going to do and if the sound will be too similar to the first?
Were always thinking about that, just to keep going and we are always writing new songs weather it be for a new record or not. At the moment we're thinking about what kind of studio. But we are only going to do what we want, we'll make it sound how we want and look how we want and if it works it works and if it doesn’t then it doesn’t. If we decide we want to make a polka then we'll damn well do it.

What's your guilty pleasure?
What do you mean?

Something that you do that you enjoy, but you feel guilty doing, like for some people it's smoking cigarettes.
I don’t know, I think if its something we feel like we want to do, then we don’t necessarily feel guilty about it because we are just being honest with ourselves because we are realizing we are wanting to do it. I don’t know; everyone has some things but I don’t think we need to mention. I can’t think of anything off the top of my head. This kind of lifestyle is so awesome for us; we just take everything as it comes.

So how did you come upon the name, The Datsuns?
It was after the car. I was looking through an old 50's National Geographic one day and came upon it and thought it would be funny. Its no big deal it looked ok written down and we just went with it.

Advice for someone starting a band?
Just do it because you love it and be prepared to work really hard.