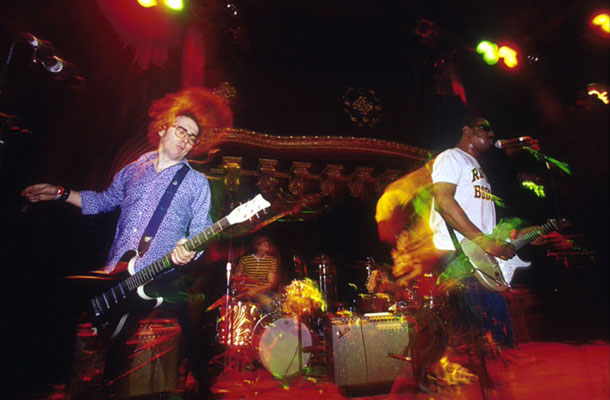 The Dirtbombs are a rock band out of Detroit with a real sence of the word blues. Front man Mick Collins has been doing it for years and I recently caught a show of theirs that rocked my world. After the show I contacted the band and got this interview. Be sure to check out the Dirtbombs music, and if you can see them live, don't miss it.

The first portion of the interview is with frontman Mick Collins.

How did the Dirtbombs form?
I put the band together in 1992 as a side project, when the band I was in at the time broke up. After many, many delays (including the now-legendary lineup changes, and a 14-month stretch I spent in a completely different band). The Dirtbombs started recording in 1995, and touring about a year after that.

How did the two drummers and two bassists come about?
I looked around to see what everybody else was doing, and tried to do something as different from everybody else as possible and still be a rock band. My chief hope was that it would make the band extremely difficult to categorise.

Why did you make Ultraglide an album of soul covers?
I felt like it, frankly. I had been wanting to cover some of those songs since I started playing music, and the Dirtbombs gave me my chance. It was only a matter of time before we got around to it.

How come Ultraglide sounds so different from 'Horndog fest'?
Every record sounds different. It's part of the band's aesthetic. Yeah, yeah, we know, it's not 'cool' for a rock band to have an aesthetic, but the Dirtbombs were never meant to be a 'cool' band. Didn't you get the memo?

Who are some of your biggest influences?
Individually, the influences of the Dirtbombs are all over the map. Every one of us owns over 1000 LPs, covering the entirety of recorded music. Strictly speaking, I myself (who handles the majority of the songwriting) lists the band's major influences as Wire, Pere Ubu, Mission Of Burma, and the Swell Maps, with a big nod to Glam Rock. 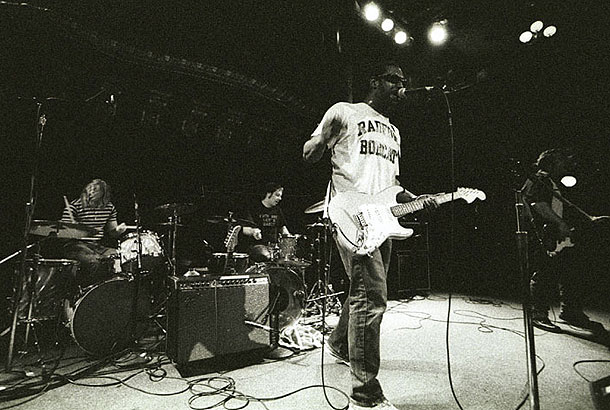 The rest of the interview is with one of the two drummers in the band, Benjamin Blackwell.

What do you think about Ipods and Mp3's (downloadable music etc,) is it killing music or helping it?
I think a lot of people are really into Ipods and mp3's and all that, but my main problem with non-tangible music, you know, stuff that only exists as a computer file, is that...it's not an actual disc, you don't get any artwork, liner notes, stuff like that. I could never make that sacrifice, no matter how convenient others may claim it is. I also prefer to listen to music on a stereo, not on a computer.

Do you do anything special when it comes time to writing new material? Anywhere you like to go or any special process you go through?
Mick writes the material... I just sit there and throw rocks at him while he's chained up in the basement trying to come up with new songs.

Whats the obsession with Capt. Beefheart?
I don't think there's an obsession with Beefheart, I think it was just a question to ask everyone in the band to kind of explain each of our personality, you know... what's your favorite Beefheart LP? It tells a lot about a person.

Have you or any members of the band ever skated or been into skateboarding?
I think Mick probably told you that he used to skate, but I bet it's a lie. I don't think any of the rest of us did either. I do remember that one of the first reviews i ever saw of the first White Stripes single ("Let's Shake Hands") was in Thrasher and that was really cool and unexpected. 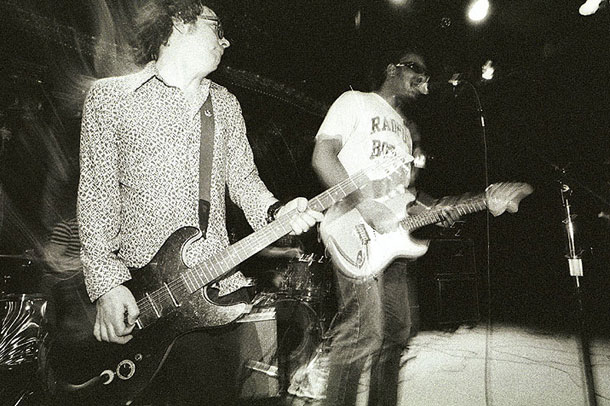 I read somewhere that Mic's eyesight is not so good, is that true and if so does that create problems when playing or touring?
Mick's eyesight isn't good at all. He's legally blind. He can't read set lists at all, so we have to scream (because he's wearing earplugs) the songs for him while we're on stage. He's also not allowed to drive the van, but that goes without saying.

Do you get women to jump on stage and get there groove on at every show?
Women don't get onstage at every show, just the ones where there's lots of them up front and dancing. Our other drummer, Pat, started that one night, and just does it whenever he feels like it.

Are you into the whole internet world?
Yeah. What are some of your favorite sites? Hmmm... Some of my favorite sites... I really like www.snopes.com, a website all about urban legends, and www.creemmagazine.com, they're actually bringing back the legendary music rag, and www.borderlinebooks.com has an amazing online library of this book called "Fuzz, Acid, and Flowers" which is a damn near complete listing of all those super-obscure garage bands from all around America.

Name five albums everyone should have in there collection?
1. The Stooges, Funhouse
2. Nirvana, In Utero
3. Sonic Youth, NYC Ghosts and Flowers
4. That Dog, Totally Crushed Out
5. The Gories, Outta Here

Does every record the Dirtbombs do have to be totally different?
I think under Mick's MO, yeah, every Dirtbombs album has to be different. It's just the way he works.