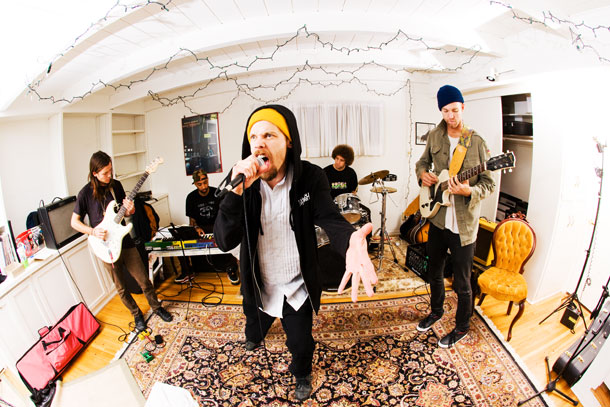 Shane put himself in rehab some years back, and I didn’t see or hear from him for a long time. My roommate Joey handed me this blank CD one day and told me to put in on my iPod. I didn’t even ask what it was. Some weeks go by and I’m on King of the Road in the middle of nowhere, homesick and ready to be in my own bed. I was sick of being in the van so I turned to the iPod for some peace and quiet, put it on shuffle, and was just staring out the window…when all of a sudden Shane pops into my head through the headphones. At first I didn’t even recognize the voice, but then it sunk in: “Holy shit, it’s Shane!” It got me so psyched. I’d say it’s what made us win KOTR that year, not Jake Duncombe (just kidding). The Blind team did it, but the Goat helped me get through it. Music can make you feel all kinds of ways depending on what it is. The Goat gets you stoked. That last line that rhymed was kind of stupid, but it’s true… “I be like I luh dat shit!”

How did you get the name The Goat?
Shane Heyl: When I used to live in Arizona at the 1833 crib with the Jigga Man, Two-Tight, and Randal Wilson, I would wake up the next day from a good time and my socks would be super-glued to the bottom of my feet. I guess it was from skating and drinking so much—all the toxins would seep out of the soles of my feet, and when it dried out, I would have to rip  the skin to get them off. I was able to twirl  the socks around the bottom of my feet  without them falling off. It was pretty nasty. From that, the homies came up with the  name Goat Foot.

Clarify who’s in the band now.
Shane: Me, Andrew, Beagle Oneism,  Kevin “Spanky” Long, Atiba Jefferson—anybody who adds to that crew right there is  An Occasional Other.

Who are some of the Occasional Others?
Shane: Anybody who wants to get sick with it. Back-up vocals, banjos, harmonicas, slide guitars—whatever—bring it. I don’t know, Turbotitto, Timmy the Terror.
Andrew Reynolds: Yeah, Timmy’s been on a track. In the beginning we were recording with just anybody that could play an instrument. It was like, “So-and-so plays keyboards, let’s get them in on a track.” Then we kind of got a set crew and we kept the name. We should try and get Phelps on a track.

Anybody ever done anything crazy on  a trip?
Andrew: We’ve never had any trips.
How about shows then? This is the first band interview I’ve done.
Andrew: We’ve only had three shows  or something.
Shane: We need to step our game up.
Andrew: It’s more like us with a computer as a music maker, you know?

Atiba’s the newest member of the band. When did that happen?
Shane: We needed that. What’s that  called, Drew?
Andrew: We needed that bottom, that glue. We didn’t have a bass player, so then it’s like, “Well, the Doors played keyboard bass on all their tracks.” So he would always come over when we were jamming and want to do stuff. He was like, “Let me get on some tracks.”  Next thing you know we started jamming and he learned all the songs, and he plays with us all the time now. We pretty much play the same notes. Sometimes he goes off on his own, but we’re kind of like a rhythm section or something like that.
Shane: After the Braydon shoe party show, he kind of became an official Goat member.
Andrew: He’s hyped on it. He loves it.

How many espresso shots do you need before you get on stage?
Shane: Aw man, well, yeah, me and Andrew have to get that Starbucks fix on before we get on stage. We have to get that ’Buckjuice.  We had a good one right before the Braydon show. We had to catch a cab to go get that ’Bucks. The cab was a total of $35 there and back just so Andrew and I could get our  juice while everyone else stayed at the bar  to do their thing. I think it was about three  or four shots.

I know you guys are both sober now,  but a lot of the lyrics are about getting fucked up or partying. Does that  help you guys deal with being sober?  Is it some kind of outlet for all that?
Andrew: It’s just another creative outlet like skating, playing guitar, writing lyrics. Doing Goat music is just like anything else. Like a kid could let loose on a painting and that could be his thing.
Shane: It’s a way for us to get out what we’ve gone through. Drew smashes out a lyric. I write down some lyrics, Beagle bangs it out, Spanky gets sick with it, Atiba hits them keys. I be like, “Luh dat shit!”

How did you come up with the song “Arizona Got You Fucked Up”? Even though the song title kind of says it all, explain that a little.
Shane: Damn, you said it. Just go to Arizona anybody, go to Arizona. Click with a crew out there and I guarantee you will understand. People get buck out there. We did our first show at Pearcey’s birthday bash; the crew was doing it real big, just from seeing everybody upping the Drunx. That song came overnight after leaving that trip.
Andrew: It’s got funny lyrics in the song, like, “This is the place where your moms  got knocked up/This is the place where  you get fucking stuck” or something  like that.
Shane: “Alcohol/Reckless/Insane/ Zooted/Ooga-booga/Nutcase/Atmosphere… I want the fuck out of here…Hell no,  bring you the fuck back, Arizona got me fucked up.”

For the people who haven’t heard you guys yet, describe your sound.
Shane: It sounds like five different categories of killing it.
Andrew: It’s skate rock. Just that we’re getting this thing in Thrasher is amazing,  you know?

How serious are you guys taking this?
Shane: As long as the passion’s in the air, we’re going to ride this thing ’til the wheels fall off. It’s just too fun. Werewolf Heart records. It’s that get up to get down Goatime movement.
© 1981–2021 High Speed Productions, Inc.