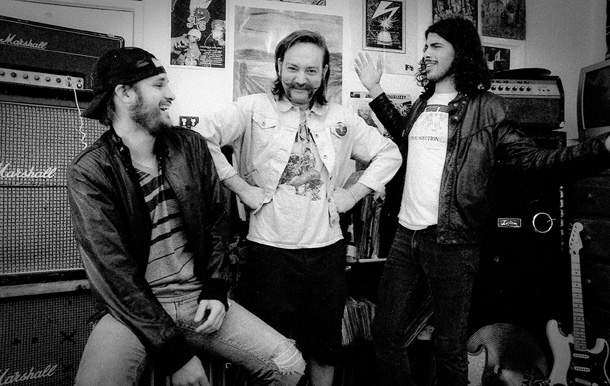 "...listening to Hawkwind and getting high"

The rattles and shakes that have been waking LA in the wee hours of the night are supposedly tremors in the earth’s surface, but those who know The Shrine know better. From Los Angeles comes a hard-hitting three-piece, combining the hooks and tones of classic rock with the energy and stage presence of a thrash band. Artwork vibrated on the paper-thin walls of a 75-person capacity room as it crammed 150-plus people through the doors to see The Shrine. It’s times like these when the definition of an intimate show must be reconsidered. Despite a slippery beer covered floor, inducing spills from both Josh Landau (vocals, guitar) and Court Murphy (bass), the band played on—backed by the solid rhythms of Jeff Murray (drums) while the crowd tended to Court’s blood-oozing head as they continued demolishing the set list. By the end of the night, the venue’s floor (and anyone within five yards of the band) was covered in sweat, blood, and beer. All signs of yet another successful show by The Shrine. —Chris Hanke

You guys play loud rock ’n’ roll. What influences the band’s chemistry?
Josh: We’d like to be deaf before we’re too old to play.
Jeff: We’ll always play what we would want to hear, and not what we think Diet Coke or Carl’s Jr would want you to hear.

You just opened up for the legendary Pentagram. How did that feel?
Court: Bobby Liebling hugged me and God-blessed me. Then I helped his band move their equipment while he impregnated a twenty-something-year-old.
Josh: We usually prefer the feel of playing a house party or apartment, in someone’s kitchen.

What other kinds of shows have you played here in Los Angeles?
Jeff: We played at Canter’s Deli a few times, and then we got banned. I don’t get it. It was awesome, we packed the place out, tons of featherheads. I guess people made a little mess, but still I’m sure we brought them in a bunch of money. I mean, it’s a bar. After the show Josh went to shake the bartender’s hand and the dude ignored him, said we’ll never play there again, and then smashed a glass on the floor.
Josh: And we once played a show on the roof of a Best Buy, run off a generator at 1:00 am. There were all these kids lighting fireworks off and shit as we were playing. Cops showed up right when we finished.

So you guys just released a 7-inch produced by Chuck Dukowski. Explain how that came about.
Josh: We played this show out in Downtown LA, I had a bunch of guitar shit break and go wrong and I lost my voice, and then right after we played he came up to me and told me he was really into us and wanted to help release our music.

How did it happen?
Court: We recorded it in our garage and it came out sounding just as bad as anything from a big studio. 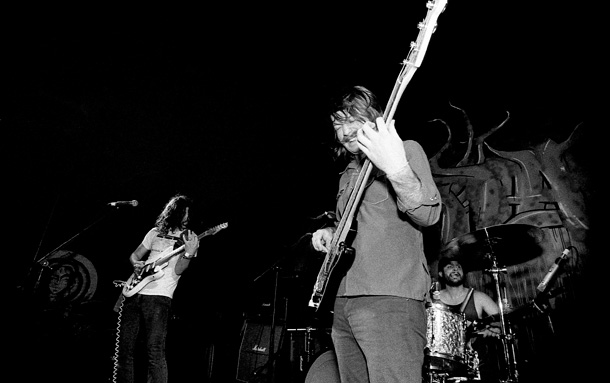 If you had a time machine and could go anywhere in the world, where would you go and who would you take?
Court: I’d take my dog to Thin Lizzy’s Live and Dangerous tour.
Jeff: Black Sabbath 1981, my favorite era, and I’d bring Ozzy with me to see my favorite singer, Dio.
Josh: Your favorite singer after Tony Martin. I’d go back in time one month to where I got kicked out trying to sneak in to see Randy Newman. I would get in, and I’d take some acid.

I read that your solo for Lionel Ritchie’s “Running With The Night” was cut in one take. Is that true?
Josh: What the fuck are you talking about?

What are your songs about?
Josh: You, man. Magic’s got a wall of amps as tall as the sky, listening to Hawkwind and getting high.
Anything else? Last words?
Josh: We play Chuck Berry music. —Magic Spiegel
© 1981–2020 High Speed Productions, Inc.