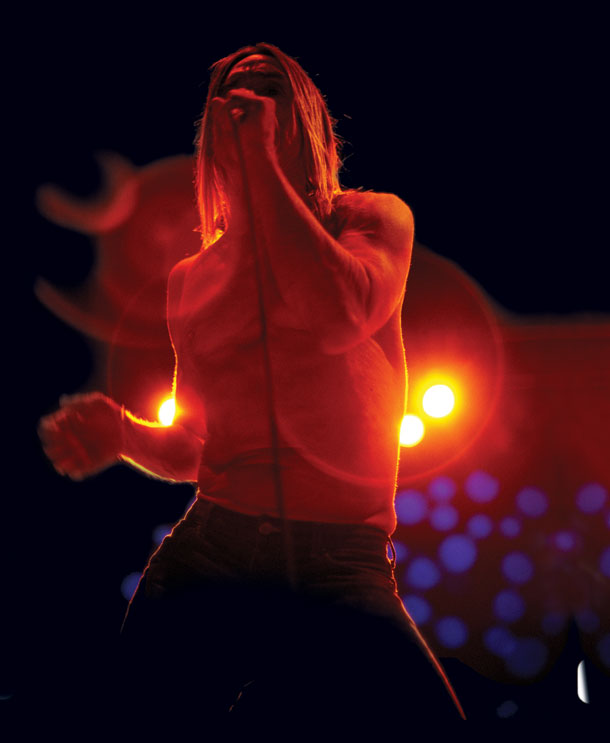 After a year and a half overseas, I returned to The States only to find out that the Stooges were playing in my hometown of Seattle in two weeks. Not Iggy Pop, not even Iggy and the Stooges, but The Stooges. Attendance was mandatory. It would be completing the triumvirate of Detroit proto punk that includes the MC5 (Stooges contemporaries) and Radio Birdman (the clearest link between punk rock and what came before). Sure, Birdman is mostly from Australia, but powered by Detroit’s son Deniz Tek, they owe a heavy debt to the Murder City.

It’s strange to write about all three of these bands in the present tense, when The Stooges’ and MC5’s heydays were in the late ’60s and early ’70s, and Birdman’s was in the mid-’70s. I thought these bands would be something to only hear and never experience.

As with the other two, the onset of dread surrounding this show was quick to appear. Was this going to be some shitty nostalgia trip for all the old farts to reminisce, and for the band to walk away with a bunch of cash? It certainly wasn’t true for the other two bands, but then again they played small venues and don’t have the kind of star power that Iggy has attained. Iggy’s show was in a decent sized arena, and tickets were fucking 40 bucks! And then I saw the cruise line commercial with “Lust for Life,” and the feeling of dread sunk deeper. Then I remembered Birdman sold a song to a car commercial as well, and it wasn’t so bad.

Tickets and a photo pass were accumulated through a series of cold calls and frank discussions. Thrasher has that kind of pull. I wanted to interview Iggy or Ron Asheton, but the publicist told me no interviews while they’re on tour. The MC5 and Birdman guys were super approachable, but I guess Iggy’s still a rock star. I had a ton of questions to ask, and I for sure would have nerded out and tried to get them to sign a record or two. “Why did you change the band name from The Stooges to Iggy and the Stooges? Why did you kick Ron Asheton down to bass so your drug buddy James Williamson could come on and play guitar? How much money would you estimate you spent on drugs in the late ’60s and early ’70s? What hardness toothbrush do you use?” The usual hardball shit I try to throw at ’em.

Before I go any further, let me just reassure you that the show fucking kicked ass, despite the shitty environment and eight dollar pissbeers. Because it was The Stooges, Ron Asheton was back on guitar, and that meant they played songs from the first two records only (The Stooges and Funhouse), their best stuff (although, despite the weird production on the record, a couple songs on Raw Power are classics, too—don’t get me wrong—and there were plenty of people screaming for “Raw Power” and “Search and Destroy”), aside from the couple lengthy jams (which worked live, I have to admit, but I like to skip them when I listen to the record). They played four songs from their new record, and for the most part they worked as well.

From the opening chords of “Loose,” Iggy went off. He was lithe like a cat (despite wrinkly skin like an elephant), he writhed and oozed and pounced and gyrated, and peppered the first song or two with enough gratuitous “fucks” (“Fucking great to fucking be fucking here!”) that he didn’t have to swear much for the rest of the show. The rest of the band seemed content to stand back and let him unwind (including Mike Watt on bass). Halfway into the set he called for people to come up on stage and dance around and help him sing. It was funny seeing people (whose parents might not have even been born before the original Stooges) get up and dance around to songs that are about 40 years old. For some, you could tell it would be the coolest thing to happen to them all summer; some mobbed Iggy and sang along, some stood up there content to film themselves on stage in what will be their crowning YouTube or MySpace moments. There were hippies in shitwigs up there, not getting the irony that the Stooges were about everything the hippies were not, and punks discovering their missing link, slam dancing to music  that predated slam dancing by 10 years. Towards the end it appeared Iggy’s  frustration at playing what amounted to an oversized cement high school gymnasium peaked, and he tried to rip down some of the curtains. Security was baffled.

I wondered if people standing at the back of the room who paid $40 would think the show was as great as those of us crammed close to the stage.

The Stooges played two encores. They’d played just about every song off the first two records and Iggy was still revved up, but there wasn’t anywhere else to go. A few more fucks and some thanks, and that was it. The show was amazing, no doubt about it, and Iggy lives on as the cool and mischievous uncle to punk rock.