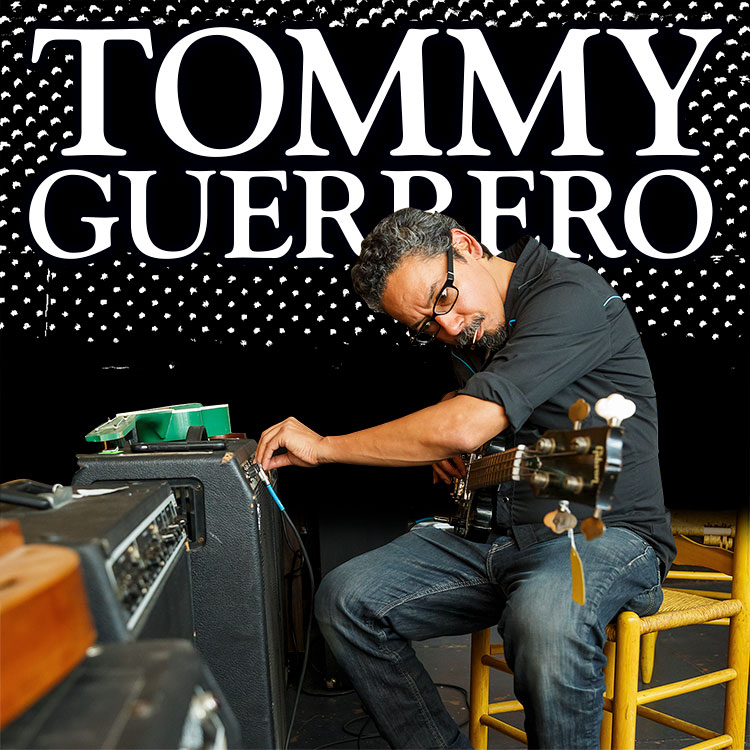 Tommy Guerrero shouldn’t need an introduction—he’s basically skateboarding royalty. From being an early innovator in the street approach to skating and a member of the legendary Bones Brigade from the Future Primitive days to co-founding Real Skateboards with Jim Thiebaud in 1991, his contributions to skating are immeasurable. But even before his Brigade days, he’s been playing music. Early bands included Jerry’s Kids (not the Boston HC band), Revenge and then the legendary Free Beer, who had tracks on Thrasher’s Skate Rock Volume 2. He’s been putting out solo records for 20 years now, and two of his early records, A Little Bit of Somethin’ and Soul Food Taqueria have gotten the deluxe remaster and reissue treatment on double LPs from  Be With Records. I got a few words with him to talk about his musical side. —Wez Lundry

What was the first music you were into?
My first recollection of a tune having an impact was when I was around five. I heard Booker T. & the M.G.s “Green Onions” and was emotionally moved. My fam listened to all kinds of stuff.

What came first, skating or punk rock?
Skating. Punk hit me around ’78.

Tell me a little more about the history of Free Beer. How did you guys start?
We had bands with rotating members before FB. It was an amalgam of those previous bands.  Bryce Kanights played bass in our first band, Jerry’s Kids.

How old were you?
Started playing around 12 or 13.

How did you meet or come together?
We all met at a skatepark in the South Bay: Skatepark Victoria.

Where did you practice?
Me and my brothers’ house, in the garage. We lived in an in-law in the avenues, my aunt, uncle and cousins lived upstairs. Our mom tolerated it because she knew it kept us out of trouble and that it was in our blood. Our father’s side were all musicians: Grandfather was a jazz guitarist and violinist. Grandmother was a vocalist. My father and his three brothers were all musicians and singers. Our father played a bunch of the jazz clubs in the Fillmore and sat in with some heavies. But they were all absent from our lives. We learned about it much later. So it’s genetics.

What was a typical Free Beer show like?
Three pissed-off people wondering where the free beer was! We played with Fear at the Elite club around ’82 or ’83. We bought a couple cases of generic beer—when generic products were hot—and Sharpied “Free” above the word “Beer” on the can. When we hit the stage, Shrewgy—he was the singer in our previous band Revenge—came out and started whipping full cans of beer into the crowd and the pit! Fuckin’ lucky he didn’t kill someone. Some people were stoked on the literal free beer.

Ray wanted me to ask you how the underage Free Beer snuck in beers to clubs back in the day.
It was easy. No one seemed to care. We probably put them drum cases. One time my brother and my band mates stuffed me in the kick-drum case and snuck me into the club. I was way underage but we were playing that night so I had to get in. I hid backstage until our set time.

Since skating came first, did you make the association with music back then? If it’s mid-70s, I’m thinking the pre-punk stuff that skaters listened to at the time: Nugent, Deep Purple, Blue Öyster Cult, Black Sabbath. Or anything else?
You’re right on point. Mostly rock. Lots of AC/DC blasted at the skatepark. Devo crept in around ’78ish. That signaled the change from rock to punk—something we could identify with.

What do you think explains the ties between skating and music? There are so many examples of skaters who are musicians as well as skaters who have other outlets for creativity.
Skaters are a creative lot. It’s just another expression of the inner world. Why music? Maybe it’s the rhythmic connection. Skating has an inherent rhythm and flow.

You’ve worked with some of these guys, like Chuck Treece and Ray Barbee. I know Chuck’s legendary as a skater, but he’s been influential for a lot of musicians. But it also seems like some of the folks from the first generation of skate rockers have gone on to do great things, including collabs. How did you meet Chuck?
I think it was at Del Mar, maybe ’82? We had a musical connection so we stayed in touch. He’d send me tapes of 4-track jams. Killer shit. Also mixtapes from the radio. I still have a taped show of Kool DJ Red Alert. Him and Tom Groholski showed up at my door one day around ’83 or ’84. They were on a road trip. That was the solidification of our friendship.

How do these collaborations come about?
Skating. It’s a weirdo magnet.

In the early 1980s is when shit blew up, skating-wise: videos, tours and some really iconic stuff in terms of early street skating. I assume you kept playing music throughout this period and during the transition to Real in the 1990s.
I did keep playing but much less as I traveled so much. I hooked up with Chuck a couple times when we had demos in Philly. Trying to get it in where and when I could.  But let me rewind—I bought a 4-track and a drum machine with the first check from Powell, around ‘86. I had a bass and guitar already. That ignited the solo recording trajectory that remains to this day. I was in a band for a bit during the ‘90s. We were an instrumental three piece. We made a live recording in our studio with an audience. There’s an energetic reciprocity that takes place in a live setting—hopefully it’s captured in the recording. I have the master and a couple tapes somewhere. It had a heavy rock/funk/jazz sort of approach.

Congrats on the reissues of Soul Food Taqueria and A Little Bit of Somethin’. Both are double LPs—just too much for one LP at a time?
Yeah, better quality. Any more than four tunes a side, you lose a bit of fidelity. But I’m in no way an audiophile. My phone is the source for most listening these days. Convenience is killing me!

Your cover art seems to have a consistent aesthetic, although it comes from different artists. How does it come about?
Magic! I consider artists as the recordings progress; the songs reveal themselves which lends to a visual idea of the whole. The art should somehow reflect and represent the feeling of the album. To me anyway. You can often choose an album solely based on the art.

Finally, you still skating much? Where you been rolling?
Not so much in the last year. I’ve been jacked by health issues. I hope to skate more this year!