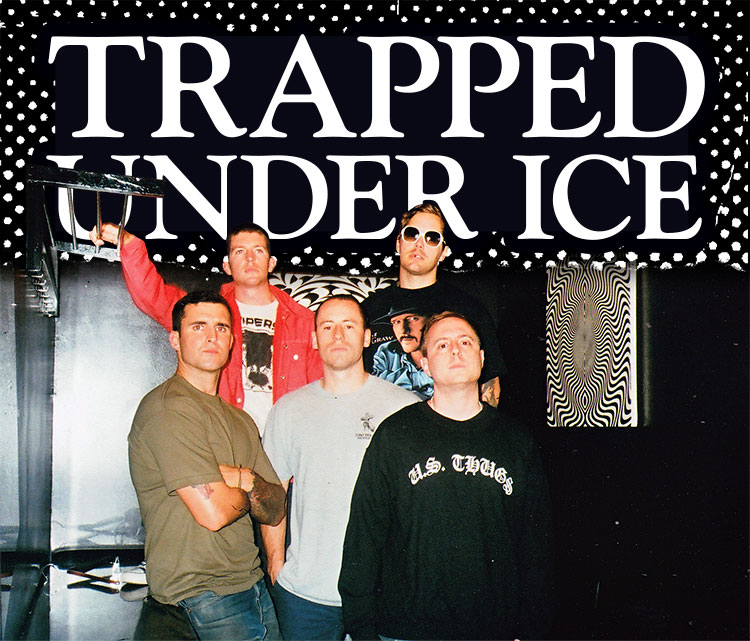 They’re back. Trapped Under Ice has returned from their hiatus with a series of friend-packed tours promoting their latest drop Heatwave, a track-after-track explosion of positive energy. I caught up with Justice Tripp (frontman) and Brendan Yates (drums) for the first half of this interview and slowly but surely, the rest of their members, Jared, Sam and Brad made their way into the green room before their  Los Angeles show. —Alexis Gross

Interview by Dani David: Who are you and where are you from?
Justice: I’m Justice and this is Brendan. We are members from Trapped Under Ice and we’re from different parts of Maryland. We have members from DC and Virginia as well.

What kind of music do you play and how long have you been a band?
Brendan: We play hardcore punk rock music and we’ve been a band for ten years now.

What brought you to hardcore music?
Brendan: I was first introduced to heavy rock music through the radio but also video games. Skate videos kind of introduced me to less accessible stuff like Suicidal Tendencies or Interpol. Things from different worlds but all stuff I wouldn’t have been able to find if I didn’t have those different ways of finding them.

What about skate videos had an impact  on you?
Justice: I had friends and family that put me on to a lot of punk-rock music. I found out about a lot of the bands I like, like Rancid and a lot of cool hip-hop shit from skate videos. Shorty’s Fulfill the Dream was my favorite skate video and Chad Muska specifically was very relatable to me as a very urban-influenced white person. I think that video put me onto a lot of music that specifically was deeper than the hip-hop I was listening to on the radio. It turned me on to stuff like Gravediggaz, a lot of cooler hip-hop that sent me deeper into it when I was young, which is still stuff that influences me today.
Sam: Osiris’ The Storm was very influential for me, culturally. It was very stylistically influential for me. There were a lot of good rap songs in there. Tony Hawk’s Pro Skater soundtrack, obviously. It was massive when I was, like, 13.

What’s the first hardcore band that got you into this scene?
Justice: I’m gonna go with Hatebreed. I liked a lot of different hardcore and punk bands but when I saw Hatebreed they were so nice to me. I was probably 13 years old and it made me feel like it was something that I could do, something I could be a part of as opposed to observing. Something that I could go and join in.
Brendan: For me, I met an older guy who started taking me to local shows, which introduced me to Justice and Sam when I was really young and they started showing me music probably when I was 13 or 14 years old. They would send me mixes of stuff to check out and that’s how I got into the music that I’m into now

Musically, who is the influence behind today’s Trapped Under Ice?
Justice: Making Trapped Under Ice a more active band again, a lot of the influences actually remain the same and I think that’s important: keeping the foundation of what your band is, keeping the identity of when we started. Brendan and I own a record label, Pop Wig, so we know every new hardcore band, every new punk band and every new rock band. We’re always sharing new music together so a lot of new bands even influence  us, like, things that might not be as obvious. Even the people in the bands influences us like Gag and Odd Man Out, that circle of friends influence me a lot with musical taste. When we started writing songs at 20 years old, we were really into bands like Hatebreed and Madball and we definitely love those bands now, but its cool to take a step back and say, “What do we love about those bands that we didn’t capture?” For example, for me, doing Heatwave, I actually had conscious thought of listening to early Hatebreed and being, like, “Yo, the energy on this record, that’s what makes that record!” And early Madball, it’s just so energetic. Fast, short songs. And that’s what I wanted this record to be for us. Energy-filled versions of the bands we love and built the foundation of our band on. There was a period of aggressive hardcore music in the ’90s that got really stale because people were so into only one thing at a time which essentially eliminated all those other outside influences.
Brendan: I think we influence each other, too, ’cause someone will be on a Devo kick or something like that and that will influence songwriting in a new way that wasn’t influenced by a previous record that was more NYHC influence. All the influences keep adding up. There’s always different things that you’re into and I think we kind of play off each other based on things that are inspiring us at the time. Everything comes full circle, too. Early hardcore stuff was influenced by Led Zeppelin which was influenced by blues. It all comes back. 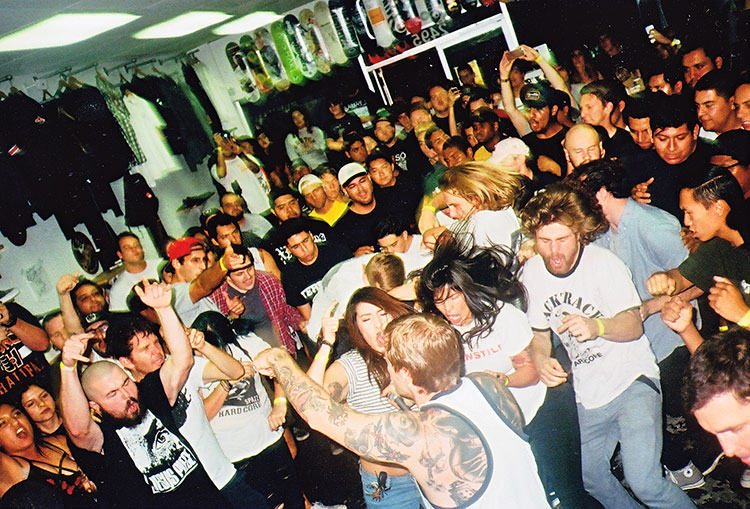 What is the craziest place you’ve played?
Justice: Russia has got to be the craziest place we’ve ever played. Everything that we thought was crazy was so normal to them.
Jared: Tanks drive down the street. Our show was like the way I imagine the Lower East Side was in the ’80s. Plus tanks and military machine guns. People were tattooing each other in the alley. When we got there, we told the promoter we were gonna go for a walk and he said, “If you leave the venue, you won’t come back.”
Justice: I actually got tattooed while sitting on some pieces of a building that I guess were blown up from a war. The tattoo gun was plugged into a wall and I sat on some rocks and got tattooed while there was a dirty pool full of people drinking and singing Tim Armstrong’s solo record.

What’s your perspective when writing a new song?
Brendan: I think usually starting things off with a general—not necessarily a riff or a lyric but a general feeling of or aesthetic that you want to try to come across. Usually you’re inspired by something you either see or feel.
Justice: My perspective writing new songs currently is, “How will this come off live? Will people want to get crazy to this live?” But also the thought of, “Will it create a vibe and will it avoid the actual vibe of people wanting to be ignorant?” I want to create songs that people are going to want to genuinely express themselves to without trying to prove themselves—as energetic, as exciting and as hard as possible.

Brendan, you have your own skate company, Baby Arm. Can you tell me about that?
Brad: We just made our first batch of skateboards. It’s a skate zine/company that I help my friend Alex with and we’re making a video right now that’s fully Hi-8. It’s a collective of things skateboard-related.

What’s your worst tour injury?
Sam: To my band’s dismay, I’ve broken my ankle skateboarding several times on tour, so when people see me skate they get kind of bummed out ’cause they know I’m about to hurt myself. It happens all the time. I’ve played several shows with a torn tendon in my wrist from skateboarding. That was a multi-year injury.
Jared: I broke my leg on tour in Korea. Brad: I’ve never hurt myself on tour ever in my entire life. I’m a machine.
Justice: I’m on my seventh front right tooth, my fifth left front tooth. I have fake teeth on this side. I have broken almost every metacarpal in my right hand. Brendan and I had many injuries to our mind and our bowels. I had a broken ankle that still gives me problems today—not even from playing, just from being at a show. I have a good scar on my head from when Brad hit me in the face with his guitar.
Brad: I don’t remember that.