TRASH TALK! Not the shit your dad talks to his scumbag trash men co-workers, but a Northern California quadtet that's been blazing the underground trails and peering to the surface every now and again to give the masses a simdget of the rawness. Thrasher's Mikal Howard caught up with Lee Spielman (throat) and Sam Bosson (beats) last week at a house party in the SF Mission. With a new LP just now hitting the streets, a general "Fuck what you think" attitude, and a glimpse into what Lee says is the "TRASH TALK WORLD DOMINATION TOUR," TT don't show any signs of slowing down anytime soon. Check it out for yourself.

It’s been about two years since we last caught up with you guys. What’s been happening in world of Trash Talk?
Lee: Since we last talked to Thrasher we’ve been keeping busy. We put out our first book (Trash Talk Collective Vol. 1), released a 7-inch (East Of Eden) featuring guest vocals from Keith Morris of Black Flag and Circle Jerks, and just last week released our new LP titled Eyes & Nines. We’ve been on the road non stop. Hitting up as many places as humanly possible. We actually just got back from an 85-day tour a few days ago. We hit up all of the UK and Europe straight into a full US. Right now we’re chilling back at home, practicing, writing new music, smoking weed, Garrett’s been making beats, we’ve been working on the next volume of our book, and getting ready to head back out again.

Tell us about your new record.
Lee: We recorded in LA with our friend Joby from The Bronx. It was the most relaxed recording session we’ve ever had. We’ve known Joby for awhile after touring with The Bronx, so everything went pretty smooth. Recording with someone everyone knows and is comfortable with is the best. There’s no pressure on doing this or that. We spent more time on this record than we have with any of our other releases, too. We spent about a week and a half in the studio this time around. Every other time we’ve recorded, we smashed through it all in about two days. This time we demo’d shit and changed stuff around for awhile before we actually went in to record. When we were just smashing through shit before, we would listen to our recordings afterwards and think about how we wish we could change this or that. There’s none of that this time around. 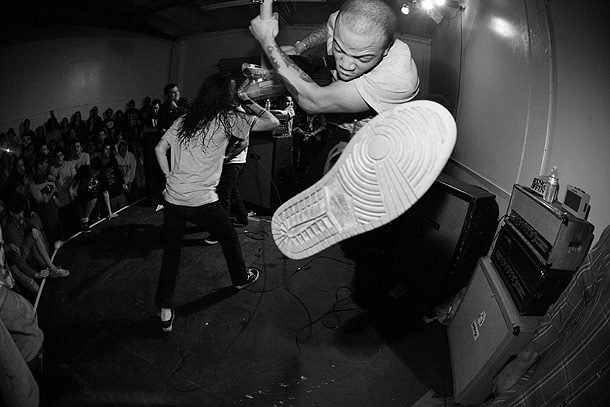 Solid piece of material.
Lee: As far as what we were going for, we got it.

Craziest tour story from the road?
Lee: No one would believe half of the shit that happens to us. I got a gnarly story. Clearwater, FL: We were on a full US tour with Iron Age and Cold World. We were playing and kids started diving off shit and fucking things up. We can’t really stop that kinda stuff. It’s out of our hands. We were just up there doing our thing, and a speaker ended up getting stomped out by a kid at the show. Afterwards the owner of the club comes up to us and was screaming shit like, “Yo! You guys are paying for this shit. I don’t give a fuck who did it. You guys were playing. It’s your fucking fault!” We weren’t going to pay for it. It wasn’t our fault. So the promoter of the venue got super mad and called all of his biker buddies up to come down to the spot and handle us.
After the show when we were loading out about 15 to 20 bikers in leather vests showed up looking to talk to us. It ended up being our whole tour in the back parking lot behind the club surrounded by a biker gang.

Old-ass fools?
Lee: Straight-up OG’s ready to fuck us up. The owner of the club kept screaming shit like, “You motherfuckers from California think you can do what ever you want; this is Clearwater, you better ask somebody! I run this whole fuckin’ state! I’ll make sure you never step foot in my fucking state again!” And the whole time this guy’s talking shit to us, his boy to the right of him has his hand on his buck knife ready to cut someone up. The guy who was screaming was like a coked-out version of Rowdy Roddy Piper. I saw all the Cold World and Iron Age guys gathering bottles and shit if it got too crazy. Long story short, it was a bunch of bikers trying to fuck us up. We eventually got out of there alive and made it to steak and shake. We didn’t get paid though. They took all the dough for the speaker, but at least we left with no stab wounds.
Sam: No puncture wounds!

What’s a Trash Talk gig like?
Lee: Some of my best friends have told me, “It feels like watching a band where everyone is playing their own show, but the music still sounds tight together.” With this band, everybody is doing their own thing. No one’s worrying about what the other guy is doing. We’re all in our own zone smashing through our set at 100% whether or not anybody else is into it or not.
Sam: It could be a basement show to one person or an arena to thousands of people. It doesn’t really matter. You’re gonna get the same 100% live show at all times. 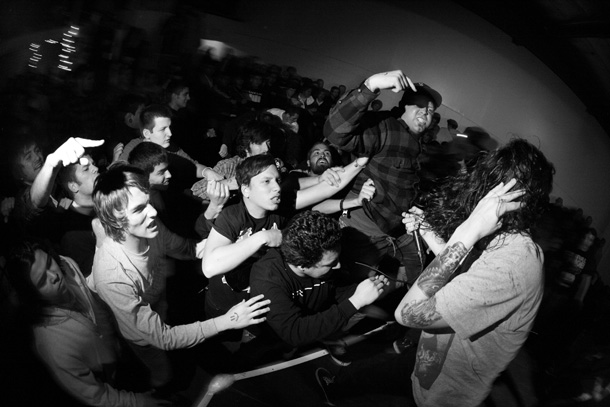 Drop the labels and say it proud?
Sam: We like doing things our own way. It’s been nothing but rewarding so far, and a bit challenging, but we wouldn’t have it any other way. This is the way we’ve always wanted it.
Lee: We basically felt it was necessary as a band to do our own thing on our own terms. Gotta keep it movin’ no matter what. The thing about doing it this way is that we don’t have to wait on someone else to give us the OK to do something. We can do whatever we want. Whenever we want. We do our own thing on our own time frame without anybody else’s opinion on what they think we should do. If we wanna tour with Metallica, we will. If we wanna tour with a ska band, we will. There’s no one to tell us otherwise.

Sorry about that. Do continue.
Lee: That’s the thing I love about this band—it’s basically just us four. If we’re all into something, then it’s a go. We really do not give a fuck what anyone else has to say about it. 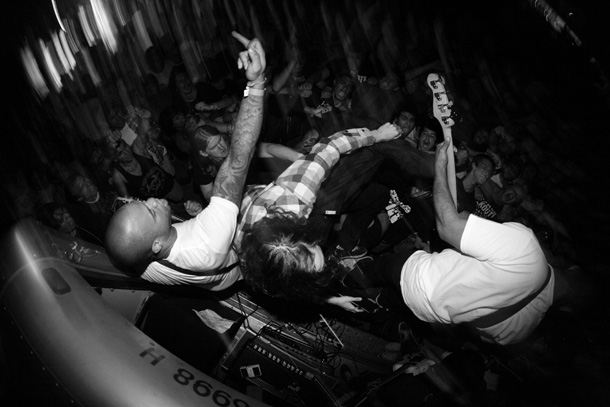 And that’s the collective!
Sam: In a nutshell. Yes.

You guys just played the Tampa Pro after-party. How was that?
Sam: The Tampa Pro was rad. We played with Fucked Up and Forgetters (new Jawbreaker band). It was awesome to play to a bunch of skate rats and pros that I look up to.
Lee: I grew up skating! Looking into the crowd and seeing tons of skaters I looked up to when I was a kid was wild. I’m not gonna lie. I was nerding the fuck out. The Skatepark of Tampa took real good care of us out there. It was one big massive party.

A little over a week after Tampa Pro, you guys headlined our Thrasher X Converse Texas Death Match Mini-Ramp Jam at South By Southwest in Austin, TX. How was that? Tampa Pro straight into the mini-ramp jam?
Lee: Straight up that was my skate week. We played Tampa Pro, then eight days later we were at the death match! The Thrasher party had the illest set up at SXSW. BBQ, Beer, mini-ramp and bands. Iron Age, Voivod, Green & Wood, Mammoth Grinder, and Bad Shit all killed it. That whole SXSW experience was crazy as fuck. We even ended up partying with Bill fuckin’ Murray at some house party out in the suburbs. He bought the whole party alcohol. SXSW is always nuts. I can’t wait for next year.

Seeing as you guys are always on the road do you guys ever make time for the session?
Sam: Yeah, we all skate pretty much except for Spencer, but—and that’s a big but—he actually landed a varial flip a few weeks ago!
Lee: This past tour was our most skated tour. Sam and I brought our boards to Europe and shredded every day. Shitty thing about that was coming back to America; customs wouldn’t let me bring my board on the plane without checking it. They wanted 85 bucks. Fuck that! For 85 bucks I can just buy a new board or come up on one somewhere. I went out to the front of the airport in London and gave my board to some little kid that I saw wearing Airwalks. He had to have been American. I don’t think they sell Airwalks in the UK. 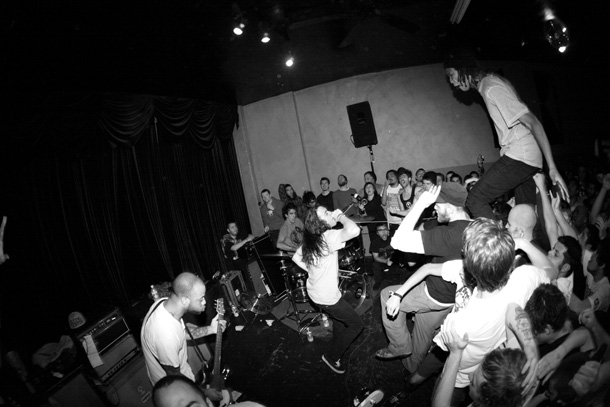 So here’s the big question: What do you guys have lined up next?
Lee: Our record release show is June 27th, Sunday, at Rasputin Records in Berkeley. It’s free. Starts at 4pm. We’re playing in the store. Should be pretty cool. We’re giving out free silk-screened posters. Check it out. Then we’re doing a West Coast tour with Sick of It All and Alpha & Omega in July.

Alpha! Give Luis a shout out right now!
Lee: Shout outs to my dude Luis Hernandez, AKA Little Pocket! Sun Valley!
Sam: Yeah, we’re playing Seattle, San Francisco, and L.A on that tour.
Lee: The day after that tour ends we’re all moving to London for about a month and half. We got a spot to stay together. We’ll be out there playing festivals all over the UK, Sweden, Norway, Belgium, and hella other places. The line-ups are insane: Guns N Roses, Iggy Pop & The Stooges, The Specials, MIA and a million other crazy bands. Basically the start of August is the start of the unofficial Trash Talk world tour. The plan is to hit everywhere in the world with our new record. World domination. Japan, Australia, Africa, China, Korea, Russia, Alaska, Mars, Jupiter, Wyoming… Wherever the fuck! We want it all.

Fuck! All-time skate video?
Sam: I have to say Misled Youth. If it weren’t for that video, I don’t know if I’d be in Trash Talk! The music they had in that video changed my life. Metal and punk. So big ups to Jim Greco, The Chief, and the whole 1999 Zero crew.
Lee: Sight Unseen, just for the fact of John Cardiel. Straight up, I probably wouldn’t be the kid I am today if it weren’t for growing up skating and looking up to people like John Cardiel. Big ups to Cards! Sac Town represent.
You guys are from Sacramento, right?
Lee: We are from Sacramento, but we’re spread out all over California now. Shout outs to Gino and the whole Lurk Hard crew from Sacramento. They’ve been killin’ it!

Who gets the most pussy on tour?
Lee: Our guy Adam Rossiter, for sure. He’s our road dog, does all of our shirt designs, and is responsible for all of our layouts. He makes sure we don’t fuck up too bad, even though he’s more fucked than us.

Let’s wrap this up. Any last words?
Lee: Don’t pose. Go pick up a copy of the new record. If we haven’t played your town yet, we’ll probably be there soon. Check our website for regular updates on what’s going down with the band. Come out to our record release in Rasputin and get buck. Bring us weed. Forwards ever backwards never. —Mikal Howard
© 1981–2021 High Speed Productions, Inc.