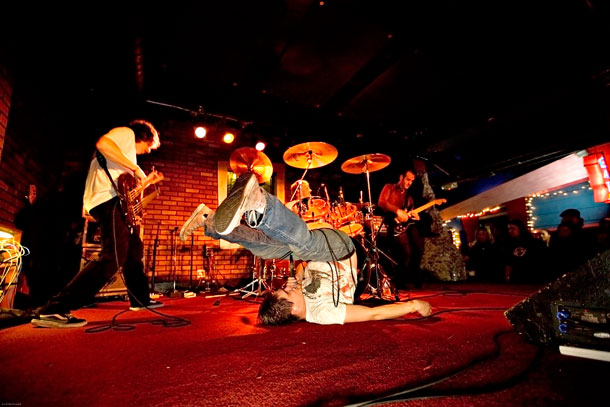 "I’ll be forever in love with punk and DIY culture..."

The Bot fly is a mildly disturbing yet fascinatingly captivating parasitic creature. Much the same could be said of Triclops. Complete with an eerie thousand-yard stare, double-neck bass guitar and “Llama hair visuals” (yes, actual Llama hair), Triclops is a semi-controlled freakout that’s one possible outcome of years spent in punk rock. Look out kids, this could be you, hopefully. Triclops is Larry Boothroyd, John Geek, Christian Beaulieu, and Phil Becker.

First, What is a Triclops? Where do we find them? Is it some mythical creature?
Christian: There’s one on the poster for the show right now. That’s actually where they exist. They only exist if somebody gives a shit enough to print them, to give them paper value.

So they exist only in graphic form on show posters?
John: That’s right. If you search the Internet for them you’ll get nothing but bullshit.

This isn’t a response to the plethora of animal-themed bands we’ve been seeing?
John: Maybe just in the sense that a Triclops could single-handedly wipe out any large mixed pack of animal bands.

Does the Triclops always have the same powers, or does it change on each poster?
Larry: It changes form; it changes powers, its mode of transportation.
Christian: And motivation.
Larry: Currently it’s a tricycle.

Is it always three-themed?
Phil: No, believe it or not that’s not important.
Christian: People always ask me how many members are in the band. I’m not sure why people take things at such face value; if an animal band shows up, does anybody think there’s a fucking live animal in the band?

If they could get the Panda Bears out of China maybe they would.
Christian: How bad-ass would it be if Wolf Eyes actually had a wolf on stage with them?
John: Then there are wolf bands where the wolf would just eat the band, like Wolf Parade; they’d just be eaten by a wolf.

So there’s LPs, CDs, and Statuettes, officially called the Triclops Noise Toy.
John: The CD comes with the LPs, or you can buy it separately if you’re a chump.

But the CD costs less.
John: But you get the full-size artwork and you get the CD with it.
Christian: With the LP you get llama hair visuals, which are more important than the CD format entirely.
John: The first 60 of our LPs, we glued llama hair onto the back.

Actual llama hair?
John: Actual llama hair and after a while it smells really bad, but that’s the price you pay.
Christian: Jello was the only one that didn’t get one of those.

Is llama hypo-allergenic? Was this a concern when picking the creature?
John: It was about as much of a concern as why we didn’t name ourselves Quadroclops, despite the fact that we’re four.
Phil: Then there is of course downloads, and then the cassette.

The cassette’s a nice touch.
Christian: We were thinking that the readers of Thrasher were going to be more stoked on it in cassette form. All growing up, if you were reading Thrasher, you fucking worshiped your tape collection. So, in 2009, we are now reporting live from our Cassette Release Party. Thrasher is here right now covering this. It must be what matters.

You have to understand that many Thrasher readers didn’t exist when cassettes existed.
Christian: But their parents have either sold them in a garage sale or they’re hidden in the basement with dust on it.
John: Their parents are downstairs getting ready to watch us.
Christian: Their parents are asking if they’re on the guest list, and if not they’re leaving. And their kids just got busted for smoking pot so they couldn’t come.
John: You know pot isn’t what it uses to be. Pot is now like heroin.

And what about the idol, the statue?
John: That’s the statuette, it’s on Starcleaner Records. Each one is hand-crafted in a plastic mold by an amazing human being named Shellhead. It’s a USB drive as well.
Phil: There’s a club in the statue’s hand and you actually plug the club into your USB port and it has the album, the artwork, and videos.
Christian: And if your mind is in the gutter, then it really does look like half a turd plugged into your computer.

You guys were previously in the Fleshies, Bottles and Skulls, the Lower 48, Victims Family, etc. Is Triclops what happens after punk rock? There was a word I had never heard before on Myspace that described your music: Zouk.
John: We’re just working with what Myspace gives us.
Christian: We want to play a Thrasher-organized show at Potrero del Sol. That park is fucking beautiful.
John: I don’t like the fences around that park, though. That’s one thing that makes me nervous. It’s so the cops can more easily control people.

Lots of parks have fences around them.
John: But it’s the whole park, not just the skate area. They put this giant green fence around it because people used to run in there to get away from the cops. They would hide amongst the hills.

What about the pedophiles? There are those signs that say, “Must accompany a child to enter this park.”
John: From what I understand, it isn’t that hard for a pedophile to get into parks. I mean, I wouldn’t have personal knowledge of this.

Maybe it’s just me because I don’t listen to as much punk rock as I did in the past, but I’ve started to think, “What’s the point of it now? What’s it saying?” Then I read on your Myspace where it says Triclops sounds like “…a band of men who are no longer held captive by their fear. Do not be afraid.” To a certain degree, one sort of hides behind punk rock. It’s angry and loud, but no one asks anything of it. And I don’t get that with this so much.
John: We don’t limit ourselves. As far as punk goes, as my friend Dan described the new Rancid album, he said it should probably have been named I’m Still Around. That’s all I have to say about punk rock.
Christian: We enjoy the fact that we’ve all done hard time in punk rock, and we use it as a platform to breakdance all over. This is just us acting naturally and not having boundaries, just doing whatever the fuck we want to do.
John: I’ll be forever in love with punk and DIY culture, basement shows and warehouse shows. And we’ve played those shows with punk bands—some of them are great, some of them are really mediocre. But there are a lot of mediocre prog bands, too. It’s just a matter of where you take it.

Is Triclops a reaction to things that you couldn’t do in other bands?
Christian: For me personally, yes; probably not for these other guys.
John: To a small extent for me, because my old band was getting a little more musically conservative—which was fine, because that was just the direction it was heading. This band definitely allows me to freak out more. Maybe you have the tendency to over-compensate when you’re let loose.
© 1981–2022 High Speed Productions, Inc.