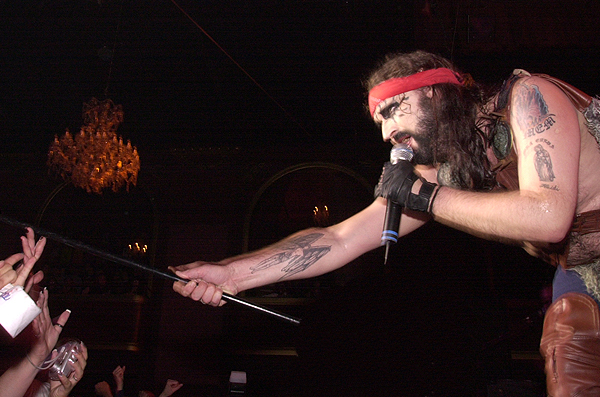 Interview by Byrnes | Photos by Schmitty

Why did Turbonegro split up in 1998?
Well, I was addicted to heroin and I had a serious mental condition. On the road, we were in Milan in Italy and I suddenly got really psychotic and that was the end of the band. The last year had been just a struggle. My health was deteriorating completely. So we just had to stop and I had to go to rehab. Now I’m on Methadone. I had to move out of town for four years and up to a small village and gather myself together. And now I’m fine and we got all these offers to come back. Last year we got offered to play some comeback shows at festivals and I was ready to do it. My health was better and we were able to do those shows. We realized we were sounding great together, still, and we had gotten many more fans since ’98. So we wanted to do a new album and get together again and start touring.

How much of what happened was a result of the rock and roll lifestyle?
No, quite the opposite. I never did drugs with the band. It was when the band was not playing and I had lots of spare time and mental illness and no expectations around me. It was between touring and working with the band when I did these drugs. I tried as hard as I could to keep it separated. When I started showing up stoned at gigs and rehearsals, we had to stop the band. It’s just a myth, you can’t play in a band and be on drugs. It’s an old rock and roll myth that I personally think sucks. Lots of good bands are breaking up because of drug addiction. They don’t get more famous, they don’t get better by doing drugs. They just fuck up the band and break up their bands.

Did the band remain friends with you while going through this?
We didn’t have much contact during those four years. It was kind of important that I stayed away from everything, from old friends. When I came back I had to choose what friends I wanted to keep. It was not that we were enemies or anything like that, but it was very scary for the others to see how ill I became. They supported me, wanted me to do the rehab, and welcomed me back. There’s no bad blood, there never was bad blood in the band.

At your show last February at the Troubadour in LA, Happy Tom introduced you as “The strongest man in the world,” and you all looked so happy to be playing.
We love each other in the band and we’re happy that we survived the dark period. That was the last show of an awesome tour. The tour was great, no bad shows. We were just very happy when we played the Troubadour show and the response we got, especially in LA, was overwhelming. We were amazed. To play in LA is always a challenge because all bands play there and the audiences are so used to good bands so you can never expect a total awesome crowd that dances and sings along. That is very rare in LA, so when we got that response we were extremely satisfied.

Was it hard to get back in the studio and record Scandinavian Leather?
No. Nothing had changed in four years. Well, everything that had changed, changed for the better. We felt we were mastering our own deathpunk concept much better this time. A lot of stuff we discovered during the recording of Apocalypse Dudes we were able to use more effectively.

Scandinavian Leather seems to continue a movement from a more hardcore sound to an almost glam-rock sound.
We have a lot of heavy metal, ’80s glam-metal, rock straight-on, AC/DC rock references. But we are less of a retro band. I think we are actually keeping a lot of good stuff from the hardcore punk scene, that hardcore punk sound that we’ve always been playing. We’ve been playing in punk bands for 20 years but we realized that a lot of our big heroes were rock and rollers, not only punkers. So we wanted to show we have clear references and heroes from our childhood. We used to listen to KISS and Alice Cooper when we were kids, before we became punk rockers. Bringing that back just adds to the punk sound. Naming it deathpunk is actually an innovation, a signal that you can like punk rock and still be a good musician and be visual and give a good show. A journalist from The Independent, the English daily newspaper, told me we are the only band who play better than our own idols. We are not looking back, we are looking forward. We are very innovative.

Does (keyboardist) Pål Pot still own the pizza place you sang about on “The Age of Pamparius?”
He sold it because people were calling from all over the world to see if it was really Pål Pot Pamparius’ Pizza Parlor. It was a real hassle. They didn’t order anything, they just sang Turbonegro songs on the phone. The parlor still exists—a Pakistani man owns it and he’s very grateful for the business.

The black metal band Mayhem called Turbonegro the most evil band in the world. Coming from them, that’s pretty heavy. Did you take that as a compliment?
Well, we were kind of scared of black metal, because in the early ’90s they were burning churches and killing each other and stuff like that. And we thought, “How can we outdo that? How can we scare those guys?” And dressing up as homos was the most scary thing we could think of. And it really scared those guys, they were really intimidated. We really challenged their worlds. We interact a lot with the black metal boys. Some of us have grown up with really big black metal stars. They think the most evil thing is our niceness, that we’re really nice guys.
It seems like Turbonegro really make an effort to confuse people, or never quite fully explain the sexuality of the band.
Yeah. I don’t think it would be fair of us to really answer or explain all our messages. We are appealing to people’s intelligence and if they get it wrong, we are just proving points about people’s stupidity, prejudice and homophobia. For us to explain it all would be killing the jokes we have. We don’t look at ourselves as a provocative band. We’re just trying to tell our stories and our points of view and some people are intimidated by it and are provoked by it. We realize that, but that proves more about them than us.

So you don’t intentionally try to make people aware of their own hypocrisies and hatreds?
We just want people who are into rock to be aware that some really key aesthetics of rock come from the homosexual scene. Wearing make-up, long hair, it’s typical gay aesthetics. Acting really homophobic and really aggro-heterosexual is very lame. If you’re into rock and looking like a faggot, you might as well boast and admit that you look like a faggot. It’s just faggot aesthetics, and if they’re scared by it, they shouldn’t dress up like homos then.

You have lots of celebrity fans, are you ever surprised to find out certain people are Turbonegro fans?
When Don Johnson of Miami Vice told me we are a huge band, then I realized we were into something good… That was a joke. I don’t know, I see that our fans are so very diverse. We have Mongoloids, we have college professors, we have contemporary music composers, we have filmmakers, lots of people from all branches of Western society are friends of ours and nothing surprises me any more about that.

A lot of people are very surprised when they read Turbonegro interviews to find out how intelligent and articulate you all are.
We all went to university. But we all dropped out as well because of the band and because we got cool jobs and stuff like that. But we have the highest average IQ of any rock and roll band. Our average is like 150. We got invited to become members of the MENSA Society, that club for people with high IQ’s. We said no. We are too intelligent for them. I mean yeah, sure they read a lot and are good at math, but at the same time they seemed to be really stupid and easily fooled. We played mind games with them, stuff like that.

What happened in LA for the “Sell Your Body” video shoot?
Jeff Tremaine and Spike Jonze were directing—Jeff wanted it to be dangerous. So they brought in this huge grizzly bear. I had to get to know that bear and he was freaking out. We were told that if the bear panics, stand still or he might run after you and kill you. Everybody was edgy, but the six Norwegians in the band did exactly what we were told. The bear freaked out, and the whole Jackass crew—I thought they had a lot of guts—they ran in every direction and we stood still and then the grizzly bear bumped into me and he recognized me and I managed to cool him down. I saved the Jackass guys’ lives.

Anything you want to say to the skateboarders out there?
Yeah. Stop doing the ollie thing. The ollie thing sucks. And if you use the ass rocket, you will get higher speeds.