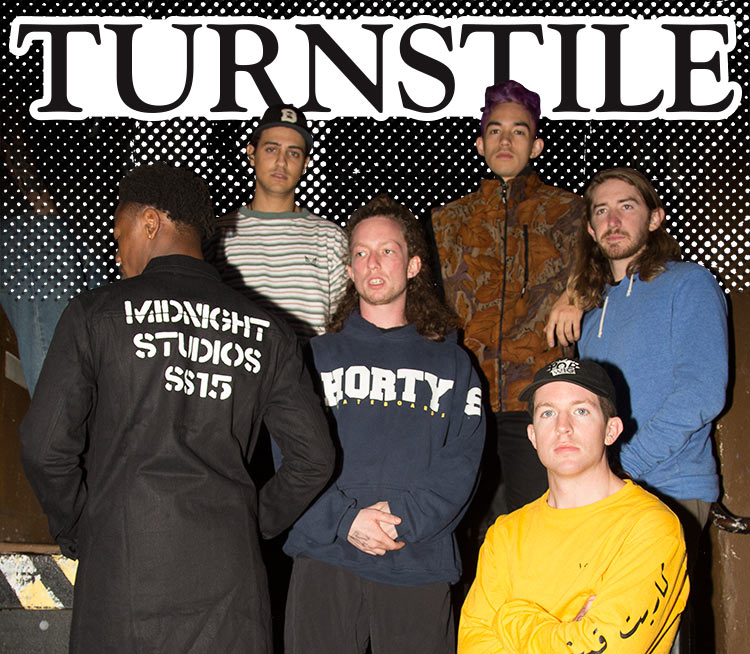 These guys are powerful. When Nonstop Feeling dropped last year it shook the current hardcore world. They bridged a few gaps in the scene with their hard riffs so everyone could come together and experience the positive and tough sound that is Turnstile. The tight-knit crew took some time to talk before a recent gig in San Francisco. Interview and photos by Jordan Joseffer

I first heard you guys when Nonstop Feeling dropped. But what led up to that point before and what has it been like since then?
Brendan (vocals): We recorded our first 7" in 2010. It came out on Reaper records in 2011. The first couple years of being a band we just played a few shows here and there. We all play in different bands and stuff. All of our other bands are super busy so playing Turnstile shows was just something we did every once and a while.  Then our second 7" came out in 2013 and that’s when we started playing more. When Nonstop Feeling came out in 2015, it’s been the most we’ve toured as a band so it’s been pretty busy and cool.

The last record went over huge and it just got re-pressed. How has the response been for you guys?
Brendan: Actually the first two 7"s and Nonstop Feeling are all on their fourth press right now. They all just met up at the fourth press. The response has been real cool. Just playing shows and traveling a lot.

Does it trip you out when you see kids losing their shit to stuff you wrote?
Franz (bass): I think it feels like nothing really because we’re all such fans of other bands that we tour with and play with on the regular. Like, the era of hardcore right before us, I’m such a big fan of them that it’s kind of, like, it’s cool that someone has the same feelings towards us. But I still have that feeling towards someone else so I’m not really paying attention.

What’s the scene in Baltimore like?
Brendan: Yeah, Franz is from Ohio but he’s always around. He’s not really from anywhere; he’s kind of like a nomad. The rest of us live between Baltimore and DC. Recently, Baltimore has suffered the loss of pretty important venues, DIY spots and stuff where smaller shows can happen. In DC right now there’s a lot of really great bands and cool new spots opening up so the DC scene is thriving right now which is cool.

Pure Disgust from DC rules. Who are some of your hardcore heroes or influences?
Brady (guitar): Dr. Know from Bad Brains.
Franz: Biohazard, personally.
Brendan: I don’t know. We could list a bunch  of bands.

I’ve seen Bad Brains at this venue you guys are playing tonight. Do you think you could out backflip HR in his prime?
All: Hell no!
Brendan: Nothing can touch him.

Should there be a weight limit for stage diving?
Franz: I got a couple friends that are big guys but they are very athletically inclined as far as, like, falling.
Brady: It requires finesse if you want to be big and stage dive.
Pat (guitar): It depends on the show. If you’re ready to get beat down at a show you should be able to take a 300-pound stage diver. 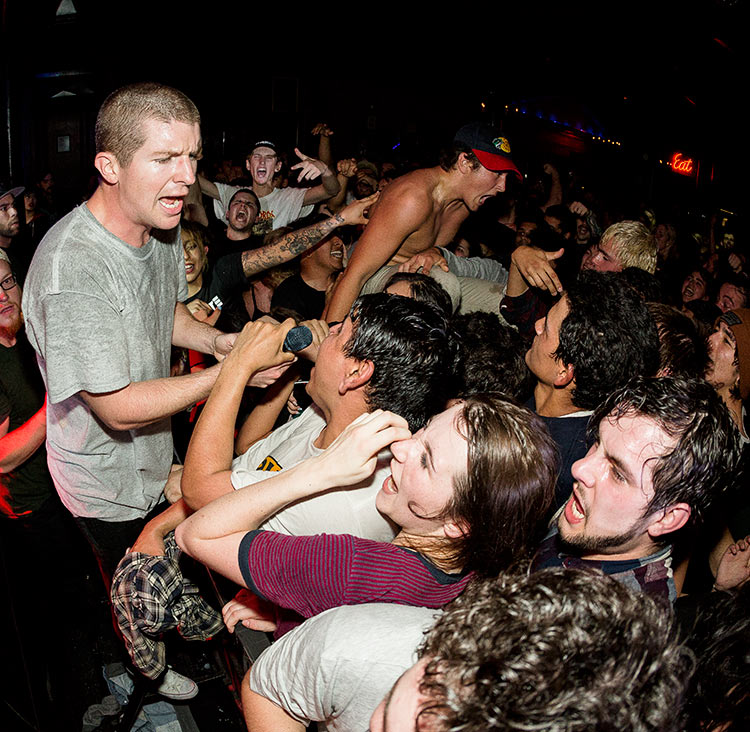 Are you guys into sports?
Brendan: Some of us.
Brady: Me, Franz and Pat love sports.
Franz: Love sports!

What sports?
Brady: Basketball is the biggest one. We’re loving the Golden State Warriors. We’re bandwagon fans for sure.
Franz: They are. I’m a Cav’s fan.

Do you think sports and hardcore go together? Do jock attitudes in general have a place in hardcore?
Franz: I think to an extent, yeah, because sports teach you how to work together as a team and that’s what you do as a band. If you didn’t work together with the other people in your band you would be disastrous. It’s cool to be able to try your best at something while being considerate of the other people around you which is the general idea of punk rock.
Brady: I don’t think they go together but they share a similar positive aggression. Contact sports, football, basketball, there’s a level of aggression but it doesn’t have to be negative.

And the general fan-dom.
Brady: Yeah.
Brendan: I hate sports.
Brady: That’s a lie; you like skateboarding.
Franz: Skateboarding is not a sport! We are not even getting into this argument right now. Absolutely not.

Judging from your Twitter it looks like you’ve been skating on this tour.
Brendan: We skate a lot on tour.
Franz: We all kinda skate on tour but, like, me, Brendan and Alex will go, like, SKATE, skate.
Brendan: Alex, myself and our other friend are starting this thing called Baby Amy which is going to be a zine that focuses on the skateboarding world but also involves music and all kinds of stuff. We’re going to do a video too.
Alex (road crew): It’s mostly just skate photos of friends with drawings over the photos and everything. We got a few interviews with shops and skaters from California.

A lot of times when a skater films a video part they get to pick what song they skate to. But what if you could pick a skater to skate to one of your songs? Who and which song would it be?
Franz: Me, personally, I would pick “Love Lasso” and my skater would be Keenan Milton, for sure! Rest in Peace.
Alex: I would say “Bleach Temple” with AVE skating over that just slamming.
Brady: Henry Sanchez, straight up.

What are you guys working on?
Brendan: A couple of us just started a label called Pop Wig. The first release is going to be the new Angel Du$t LP and then Turnstile is going to do a singles 7". That should be coming out sometime this summer. And we have a bunch of other releases planned so it’s pretty exciting.

Hardcore can mean a lot of different things to different people. Not that it needs to be defined but what does it mean to you?
Brendan: To me, I like the fact that anyone can start a band and there’s a community that will check it out and have people support each other. Also, hardcore is the most open-minded place as far as a scene that enjoys music. So, an open-minded place where people can just start a band and right away have a show and express yourself. It’s very expressive and also it’s a very high energy environment which is good especially for youth culture.
Franz: I feel like hardcore is sick because it’s like a universal vehicle you can drive no matter what; there’s no rules. You can be as left or as right as you want and it’s all the same.
Brady: I think it’s about rebellion but not for the sake of rebellion. Like rebelling against the things you don’t like and supporting the things you do like.
Daniel (drums): I agree with everyone else. One of the most important aspects to me is embracing independent thought. Straight edge to me is a huge part of hardcore because it’s the act of thinking independently and rebelling against your peers. Anyone can rebel against their parents, anyone can rebel against society, but rebelling against your peers is the hardest thing to do. Truly thinking for yourself. I try to embrace that. Every few years I try to reflect on what I’m doing in life and I’m always happy with it because I do what I want to do.