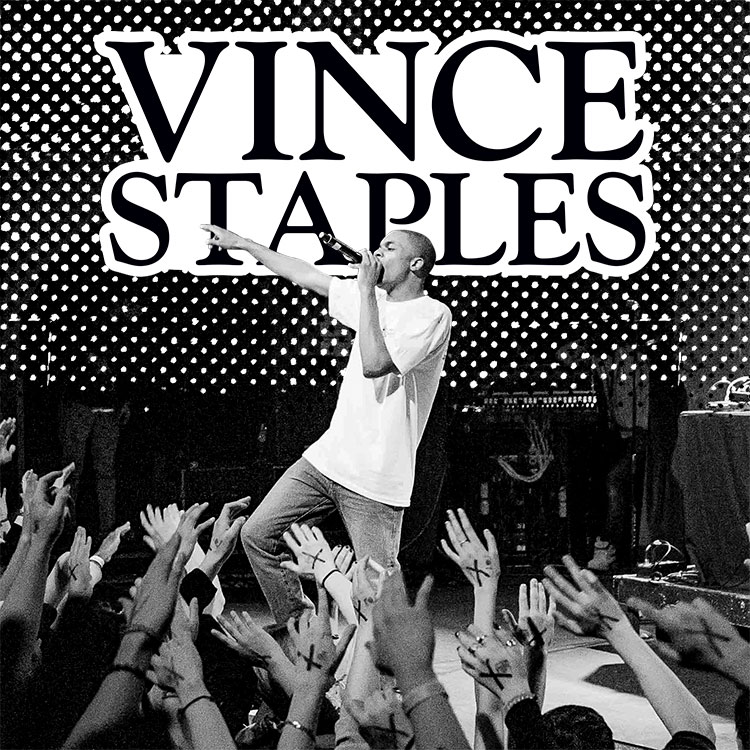 At just 23 years old, Vince Staples has accomplished more in his rap career than most people do in a lifetime. The Long Beach native is a featured guest on the Gorillaz’ forthcoming album, Humanz, and the track, “Ascension,” is already being circulated. Coupled with the success of his most recent album, Prima Donna, and singles like “Norf Norf” and “Blue Suede,” the Def Jam Recordings signee has clearly hit his stride. While on a brief tour stop in New Orleans, Staples had some time to chop it up about Christian school, his relationship to skateboarding and how Mac Miller was trying to kill him. —Kyle Eustice

I was surprised to learn you were only 23. Did you anticipate this fame happening and kind of so quickly?
Uh, no. Not at all, but I appreciate it. It’s fun, I guess. It’s a lot of hard work— it’s all hard work. If you follow directions and listen to people who know better than you and surround yourself with people who want you to do the best you possibly can, it will all work out.

You have a really good home at Def Jam too. When you joined their roster, how did that feel?
Well, I appreciate that. They do a good job. They do their best. That’s all you can really ask for from anybody else.

Did you feel at home there?
Not really. It was a small school, so I knew everybody and the teachers were cool, but it was school, you know? The fact it was still school  just makes it still school, so as a kid, you’re automatically going to go against it.

Were you a good student?
I always had good grades. School was easy. I never had a problem.

I read in an interview that you don’t drink or smoke. What went into that decision?
I just never started. It’s easier to not do it. I never really got around to it, but I don’t have the blessing or luxury of just being able to  have that strength to stop. I just never got around to it. It was never something I cared for. When I was a kid, it wasn’t everywhere like it is now.  It was a different situation for me. It was never a thought of mine. I was always weird. People always ask, “How did you make it out of such a harsh environment?” and it’s really not that deep. I happen to live where I live and my friends are my friends and they’ve known me my entire life. I was just the weird one and they pushed me to not be otherwise. I had a lot of good people around me that made sure I stayed myself.

It takes a strong person to not succumb to that life, especially in the music industry, when drug and alcohol use is really prevalent. I better not talk to you years from now and you’re the complete opposite.
And I’m all high?

Yeah.
I promise you I will never be super high.

You said something about going to  Mac Miller’s house all the time and they’d be smoking non-stop.
I had to stop going over there eventually because my asthma is really bad and they were trying to kill me. There was a lot going on over there.

He’s hilarious, but I can only imagine the debauchery going on behind closed doors.
Oh yeah, he’s a very debaucherous creature.

You’re networking with the right people so you don’t put yourself around people you wouldn’t want to work with, is that right?
That’s what I’m saying.

You said something like rappers act hard to scare you and try to glorify things. Like rappers will bring fake guns to video sets and they don’t live in Compton, they live in the Valley, which is really not all that gangster. What’s your opinion on that?
It’s less about that and more about feeling they had to do it to get notoriety. That just goes to show how we look at these artists. If an artist really wants to become successful and that’s what he has to do to become successful, he’s going to do it. The fact that’s on me within this genre is kind of sad.

You’ve been called a “regular rapper.” You don’t put on this fake persona, which I appreciate. Why go that route?
I don’t know. I just never had to be anything I wasn’t, so it was easy for me. It’s funny, as much as people are surprised by me being the way  I am, no one where I come from is surprised, you know what I’m saying? I’m just glad I am able to make a living with who I am and what  I do.

One of my favorite beats is the “Norf Norf” beat. Did you help out in the production?
On that one—nothing. I do now, but as far as that one, I just heard it and wanted it when I was finishing my album. Clams Casino was playing beats and I was, like, “Let me have that.” He’s, like, “Why? Do you think it fits?” I knew it would fit. I think it’s more about hearing it and less about telling the producer what to do. I just want them to have control of what they create and then I’ll go from there.

Do you have any relationship to skating?
I’m from Long Beach so if you were a kid and didn’t skate we kind of shunned you. I grew up during peak Baker time, so it’s definitely something I did. That was my shit.