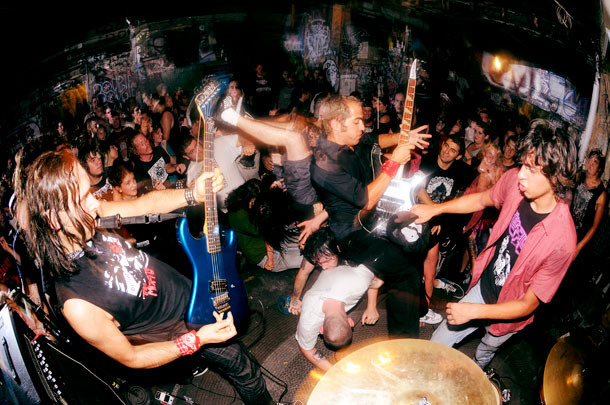 "We have a sacred mission to bring the power of hardcore to the people."

People come to Amsterdam to visit the coffee shops and stroll the Red Light District. These guys came to start a band, and they’re straight-edge. Marko sings, Marc plays guitar, Alex plays bass, Wolfi plays drums, and for over 10 years they’ve been creating straight-up hardcore. They also just put out a new album titled Full-Scale Assault. They’ve toured all over, luckily stopping in the Bay Area where I was able to talk with them after their show at Burnt Ramen Studios.

What’s it like being a straight-edge band from Amsterdam?
Marc: It’s great because we get all the ass.
Marko: If it’s all around you, it doesn’t attract you. It’s not like, “Dude, let’s smoke some dope.” It’s boring. In the mid- to late-’90s we had a strong straight-edge scene but now it’s just us four in the whole city.
Marc: Even though we’re a straight-edge band we’re totally for the legalization of drugs, because we think it should be everybody’s choice what they do and don’t do. We don’t like people pushing their opinions on others. When my American friends are in Amsterdam I always bring them to the best drug places.
Marko: That’s because you have a deal with the owner, man.

What’s your take on prostitution?
Marc: First off, we don’t need to go to prostitutes because there’s enough women for everybody in Amsterdam. Second, I think it’s good that prostitution is legal. They pay taxes and have a union in Holland.
Marko: Well, Marc said the good side, but some of the girls are forced to do it and I don’t support that. 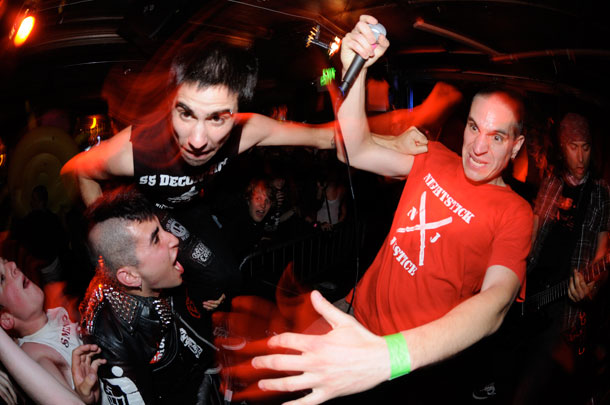 John Brannon from Negative Approach sang a couple tracks on your new album. How’d that work out?
Marko: Two years ago we went to England to see a Negative Approach reunion show.
Marc: It was a festival organized by Sonic Youth, so they were playing with the Melvins, Dinosaur Jr, the Stooges, and MC5. Iggy was dancing when Negative Approach was playing.
Marko: It was great seeing Negative Approach, and then the next band’s the Stooges, and the next band’s MC5. We hooked up with them there.
Marc: There was a lot of security but somehow we got backstage. I don’t know how.
Marko: Marc came up with the idea to get John Brannon to sing. I was like, “No way.” Two days later he was speaking with John and he was going to do it.
Steve Albini recorded it. Same dude that did Nirvana. How’d you get him?
Marc: We wanted to do something funny or crazy and thought, “Who could we ask to record our album?” We came up with Rick Rubin, Ian MacKaye, and Steve Albini.
Marko: It started as joke, we were just  bull-shitting. But we spoke to him and he  was totally into it.

You got any good Southeast Asia  tour stories?
Marc: We can tell you the Indonesian story.
Marko: It was like the hottest show ever. Over the top hot. This guy from Brazil was drumming for us on that tour, and he said he’d never played such a hot show. I was running through the crowd, there were over 1,400 people, and you couldn’t breathe. We were going to do an encore when Alex ran up to me and said, “Dude, stop. The drummer’s dying. Some white shit’s coming from his mouth.” The organizer came up to me and asked me if I though it was warm. He told me a death metal band played last week and the singer died. I was like, “Thanks for telling me that after the show, fucking asshole.”

You played at a ramp in the Philippines?
Alex: It was basically a skatepark. They had to move some ramps so we could play.  There were people stage diving off of the ramps. They were totally crazy. Nobody  gives a fuck. They do whatever and there are  kids skateboarding.

How do you think hardcore is  doing worldwide?
Marko: Punk as a movement is always going to be dead. It’s always going up and down. Last two years were amazing in Amsterdam; tons of new kids. Before that there were like 25 people.
Marc: This period of time is one of the most interesting, because you have the early ’80s, then you have late ’80s, the second wave of hardcore, then the late ’90s there was a new wave, and now there’s another wave.  A lot of kids are combining ’70s rock and metal. It’s progressing and making it more interesting.
Alex: Hardcore is just now being fully recognized as a separate movement  in mainstream music. The movie American Hardcore came out and it seems like that would have been pretty much impossible 10 years ago.
Marc: It’s funny how these bands are legendary now. John Brannon told us there would only be like 30 to 50 people at the shows. Now they play reunion shows and draw like 1,500 people.
Alex: It can be dangerous, because it takes the realness out of the music. We’re living in a capitalist world where everything can be sold. They did it with skating. Computer games have nothing to do with it; they’re all just cashing in on a trend. That’s something we have to watch out for. We have to keep it real.

Last words?
Marko: Listen to the old bands, listen to the new bands, get inspired and play music.
Alex: We’re going to keep on touring. We have a sacred mission to bring the power of hardcore to the people. We’ve done it for the last 11 to 12 years and we’re going to keep  on doing it.
Wolfi: Skate hard. Die old.
© 1981–2021 High Speed Productions, Inc.