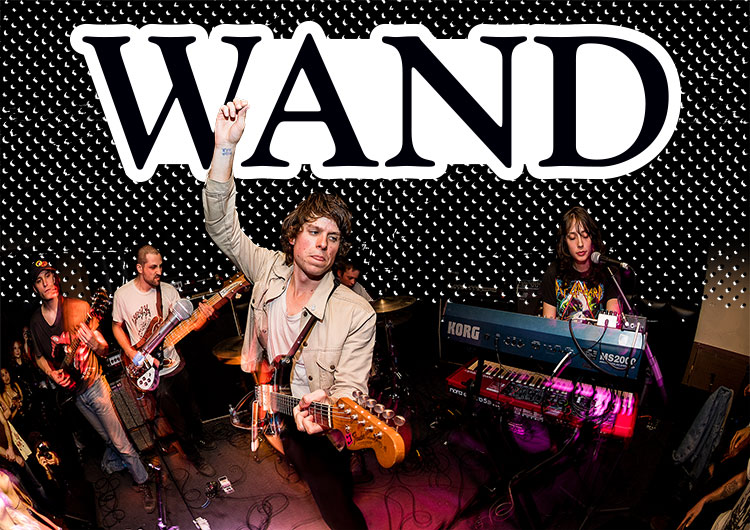 Wand is a whimsical five-piece band hailing from the smoggy lands of Los Angeles, CA. I don’t have a fancy paragraph full of big words crafted to explain how rad they are, but if you own one of the lucky sets of ears out there that have been blessed by their sounds, than you know the deal. I am honored to present to you this interview featuring Cory Hanson and Lee Landley of LA’s best kept secret: Wand. —Jimmy Astleford

Where is Wand from and how did you meet?
Cory Hanson: A bunch of us went to school together at CalArts in Valencia, CA. It’s, like, a quirky art school in the middle of a weird insular town. It’s sort of like being inside of a glass bowl. I feel like there is a weird association with that school ’cause you can go up there and just be totally removed from Los Angeles in a lot of ways, and a lot of us sort met through that. Sofia, our keyboard player, had a studio next to mine at CalArts and I would give her guitar lessons when I was, like, 20. We all sort of connected through that school in some way or another.

A lot of people refer to you guys as a psych rock band but it seems a lot more complicated than that. I hear a lot of different influences in your music: metal, punk, kraut. What are some of Wand’s biggest musical influences?
C: Miles Davis is a huge hero of mine.
L: David Bowie is a really big one for me, and then Velvet Underground for us all as a band.
C: As far as nastier music, Crass is a huge influence. And Sleep. Sleep is probably my favorite heavy band of all time.

Cory, after the album 1000 Days, both yourself and Evan recorded and toured in  Ty Segall’s band, the Muggers. In that period you also dropped your solo album The Unborn Capitalist from Limbo. Lee also has his electronic side project, Oil Thief. Do these side projects you pick up in between albums help you guys progress musically from album to album, as far as Wand goes?
L: Just speaking for myself, I don’t know how much the other music I make affects how I work on the music with Wand, but I do know when  I am done working on an album with Wand,  I am always really ready to work on the Oil Thief stuff and they’re super different so it always feels fresh going back to the other and vice versa.
C: In terms of the new record, I don’t think the ways that the songs came into existence would have been the same if I hadn’t taken the time to do the solo record. The idea behind that record was “I am just gonna make whatever I want right now. This is what I want to make and I am not gonna think about anything else and I’ll just see if people like it or if anyone cares.” At the end, the thing that I took away from it was that I felt more proud and more satisfied than I had with any of the records I’d made before. Having learned that, going into the next Wand record I was just, like, “Let’s go crazy and do whatever we wanna do!” The Wand records are all different and great, but there are some things that we may have done differently knowing what we know now—which is how life is, but I am just finding that making records is more satisfying the more that I do it.

Your music makes me feel like I’m in some sort of mythical fantasy. It takes me to a place, as weird or cliché as that may sound. When you write music do you have a goal in mind to make people feel a certain way?
C: It’s a totally fantastic journey. A lot of the time when I am writing lyrics I’ll listen to the song and think about what the song evokes to me and I’ll use that as a point of departure, like a locus, and go from there. With the first two records I wanted to have these really disgusting guitar sounds that are super heavy, but have the vocals be a sort of guiding light. It’s so much less alarming or stressful because the vocals are, like, “This is fine; don’t worry; everything’s falling apart.” When I was initially working on the first Wand stuff, that was the idea. I wanted to create a heavy band where the vocals aren’t trying to match the sound of the instruments or the mood of the music, but rather subvert it with this whole other attitude. You start with one thing and you add this other thing that sort of interrupts it.

These days almost everyone uses social media platforms to market themselves, but you guys don’t have an Instagram page dedicated to the band. Is there a reason for that? You don’t seem like a band that really force feeds anything you put out, and the people that figure it out are the lucky ones.
L: Yeah, it’s important that if there is any one reason people like us, it starts with the music.
C: There’s no other place to go. There’s no other reason to like us. Unless we were way more attractive, then we could shamelessly self-promote and people would be, like, “I love this band,” without ever hearing us or whatever.
L: I usually feel uncomfortable when something is being pushed on me that I know nothing about and have nothing to do with, and I am supposed to signify to the world that I have some passing allegiance to a thing or follow an endless list of updates and reports. The longer the band didn’t have social media, the more it felt like we didn’t need it. Though we did recently try to start a Facebook page. They are trying to shut it down, though. We don’t have personal Facebook accounts so we had to attribute it to a fake person and the snoops might have found us out.
C: I’ve seen so many bands try to make their band using Facebook or Instagram and just slam people with their personae, but then the music suffers ’cause they spend more time conspiring on how to make the band popular when the best way to build a sustainable audience is to play and play and play together and get on the road.

Right around the time people are reading this interview you guys will be releasing your fourth album, Plum, on Drag City Records. What should we expect out of the band on the new album.
C: If you don’t go in with any expectations you’ll have a better chance of enjoying it. I think it’s the most dense record we’ve ever made. There’s a lot of information. It’s the darkest record,  and the lightest. It’s the poppiest, most melodic record, but it’s also the harshest. It feels like an enigma to us. Multiple listens are highly encouraged.

Were you writing all the songs that are on Plum during your time spent working with the Muggers and doing the solo album,  or was Wand in hiatus during that time?
L: There are a couple songs on the record that were sort of brought in fully formed by Cory, but most of the material was harvested from really, really long jam sessions, over months. Doing iPhone recordings and pulling one piece or a bunch of pieces from a jam that felt good, then turning that into a song.
C: Some of it was written pre Muggers. We would just jam and do these 45-minute to an hour-and-a-half jams, then I took those recordings to Europe while I was touring with the Muggers and I would just listen to them obsessively and come up with ideas. Some of those ideas ended up making it on the new record. It’s a way different process, ’cause its more like listening to what everyone is playing and listening to the different melodies and rhythms, then starting to imagine songs. On this album, we were coming from the spirit of bands like Can. We were listening to a lot of Miles Davis and John Coltrane. Letting the ensemble in, letting more improvisation in. This Heat was also a big influence, as far as bands that work by improvisation, but just meticulously record everything, then listen back and start cutting and pasting.

You guys just returned from a pretty lengthy European tour. How was that? You guys went to some pretty insane places.
C: Well, we kept having these weird moments where things people were thinking about would just manifest themselves. There was one time when I was singing “Can You Feel The Love Tonight?” from The Lion King while driving in the van, then we walked from the van into the hotel and it was playing in the hotel. Just spooky stuff—sound engineers unknowingly line checking by singing songs we were planning to cover that night. Another time we were all talking about 2001: A Space Odyssey and we walked into this room and the TV setup looked just like the Monolith. So I was, like, “Sofia, you gotta do it!” and we had her act like a monkey in front of it.
L: She did a great job!
C: We played a festival with Thurston Moore’s band, Primal Scream, and Slowdive, and I got spanked by the bassist of Thurston Moore’s band. She bent me over and spanked me. What else happened? We saw the Acropolis. Lee, Robbie and Sofia  went to Jerusalem.
L: It was crazy. It was the last day of Ramadan and we went into the Muslim quarter at night while everyone was breaking their fast. Hundreds and hundreds of people in the streets. People as far as you can see. It was crazy.
C: We drank a mysterious psychedelic liquor
in Tel Aviv called Tubi, and another drink  called Khat.
L: It’s like an amphetamine leaf from Yemen,
I think. You can find it certain places in Tel Aviv. We played with this really wild surf band called RPS Surfers and one of the dudes just brought in this giant two liter full of this crimson juice and was, like, “Hey, anyone wanna try some tea?”  It was like a free lapse for me. I am sober and it was, like, “I am literally on speed right now!”
C: It made us all pretty horny, and like stretched musical time in a crazy way. Tel Aviv got the Khat set. We were on stage, like, “Whoaaa.” Then we went swimming at 7am and Evan got stung by a jellyfish. We did a lot of swimming on this tour.
L: I often find that swimming is the quickest  way to cement an experience in a place you  have never been before. It’s immediately in  your brain forever, like, “That crazy time I went swimming in that weird lake in Switzerland!”

I have heard Henry Rollins play Wand on his KCRW broadcast and I also saw a quote from Captain Sensible quoting you guys as his new favorite band. Do you guys fan out backwards on the fact that these guys are into your music?
C: Yes, I think it’s absurd!
L: Yeah, it’s wild.
C: Henry Rollins in particular. Anytime I’ve actually been around him he is just super nice. They’re all really nice people, but it is weird growing up and really respecting these musicians and their public personalities, then having that feeling reciprocated. It’s surreal.

That’s the point where you know you’re doing something right: when your idols in a sense are looking up to you.
C: It’s a good affirmation of what we’re  trying to do with the band. Even though musically we’re very different from The Damned, Black Flag or Rollins Band, it’s still nice to  share spirit.