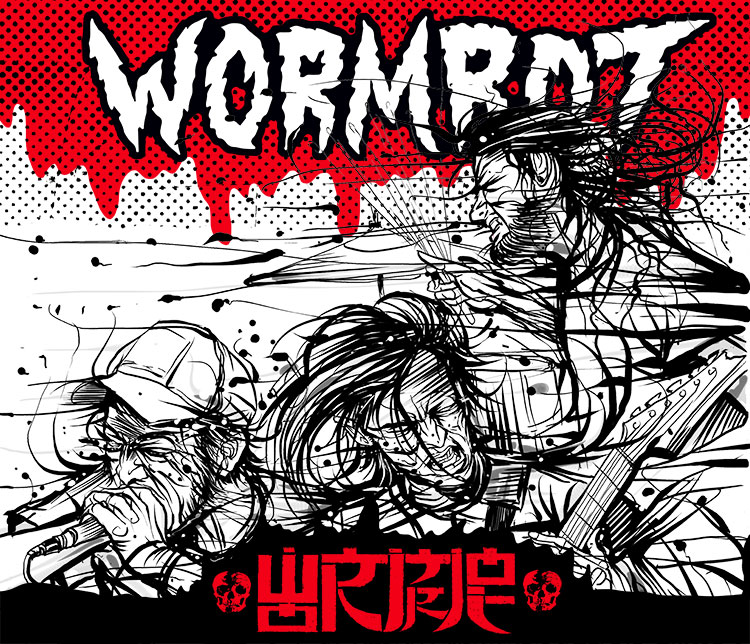 Even the most stubborn grind heads will admit Wormrot’s new album Voices not only raises the bar but shatters it. The common thought with those familiar with the genre is there’s not much more you can do with it considering the early days of Brutal Truth and Terrorizer. Wormrot, with only a throat, guitar and drums, takes it to a far away level of the game and makes a piece of it their own. Hailing from Singapore, Wormrot is about to embark upon a European and US tour five years after their last release prior to Voices. Throat of the trio, Arif, gave me some details on their latest album. —Sam Hitz

It’s been five years since Wormrot released its last piece. I read Voices was top secret. Was it difficult to pull off in secret?
Voices wasn’t really a secret. We played a few tracks off that album during our live shows here and there for quite some time before we even recorded it. People were expecting a new album soon but it was delayed for a couple of years due to our hiatus. Some did not even realize we spew some of the tracks live as we tend to join the old and new tracks in our set list. We do receive feedback right after the set from the gig goers stating, “Dude, some of the tracks caught me off guard. Was that new?”

Voices plays so tight it honestly sounds like five years in the making. How much of the lyrical content were you sitting on before you started writing this album?
After our second album Dirge came out, we had begun writing new stuff. That was back in 2012-2013—but a mere quarter of Voices. Everything was kind of half-fucked songwriting as we were busy touring for Dirge. The real writing and modifications began in 2015 after we found Vijesh, our new drummer. So it didn’t really feel like it was five years in the making. Especially lyrical-wise. I wrote all 20 tracks’ lyrics just two weeks before the recording started. It’s insane. Weirdly, it was quite a breeze. Kind of. I had a lot of pent up bullshit—stuff that happened during our hiatus—and basically dove down headfirst on a piece of paper. Stress reliever is an understatement. Felt so good when it was my turn to track down the vocals.

Classic grindcore like Brutal Truth and Napalm Death have always presented tremendously sincere lyrics to pair with the ferocity of the music. Is there anything different to your lyrical approach on Voices?
I’ve written about political issues before, especially on our debut, Abuse. As time goes by I realized that it is redundant trying to convey messages like, “Please save the world,” in my lyrics because the world has already been fucked ever since the first two humans set foot on this planet. Lyrical-wise I’ve treated every album as a diary, be it the good times or the bad times in relation to the band. Sometimes I’ve felt more comfortable writing—especially with Voices. We have been through a lot of hardships and struggles during the hiatus and it’s too personal to even talk about it. But I have translated them into that album as a more general base so everyone could sort of understand my frustrations.

Sonically this album has some major balls for just drums, throat and guitar. How much time did you spend in the studio and what was the funnest part?
All I can say is that we were almost broke going to the rehearsal studios to create this album. We have spent quite a number of hours brainstorming, modifying and finalizing. You may have realized we sounded a little different compared to the previous albums. I guess that’s the most fun part. It was a refreshing state of mind to do something different but still Wormrot. We do not wish to create the same album every time but keeping in mind not to wander off too far from our roots.

What was the hardest part?
Keeping up with the bank account to spend on the rehearsal studio hours. Ha! We do not have the privilege of having our own garage to jam in. Nor do we have the complete setup to go on full rehearsals. Not to mention our day jobs are consuming the life out of us so we were pretty much almost drained when it comes to a proper rehearsal as a band.

Any difference in rituals before a live show and a studio session for Wormrot?
We never had any rituals before any recordings  or live performances. Fuck it, plug and play.  Although personally I tend to get ultra  nervous before every show. And still do. I realized we have been doing this for almost 10 years. Not sure about the others. They seem fine. Probably  just me.

The Southeast Asian metal scene is insane and has been for a long time with tons of bands from the States, UK and all over touring there. Where does this appetite stem from?
The Southeast Asia metal scene is amazing. We have gazillions of great underground bands yet to be known. I believe at this day and age where social media is concerned, it’s easier for the rest of the globe to do their “research” before heading down to Asia. At the same time, witnessing great bands popping out of the Asia region made the rest of the world take notice that there is a strong scene going on and they decided to jump on the wagon.

You guys are headed to the States soon to play some shows. What cities do you have lined up? Have you been here before?
As for now we can’t disclose the cities we are heading towards. It’s all still being planned with our booking agent, Crawlspace bookings. We will have all the details once everything has been confirmed. We toured the States before and it was an amazing experience. Just a little culture shock in terms  of lifestyle but it’s way easier to communicate.  Non-existent language barriers as our first language in Singapore has always been English. We can’t wait to be back in the States to meet up with old and new friends. It’s been too fucking long.

Any skateparks in Singapore? You guys fuck with skating at all?
I am only aware of one in the town area. But I am sure there’s plenty more here in Singapore. I can’t skate for shit! Not too sure about the rest, though. So is this interview being cancelled?

Arif, I thank you for your time. You guys continue to raise the bar. Any last words to the readers?
Although I am a dumbass when it comes to skating, Thrasher has always been the first thing I think of when skateboarding is concerned. So I am  definitely honored you guys have taken interest in our band and we can’t thank you enough. Hope to meet you guys in the States this year and I will personally show you how I will fuck up my back with skating.