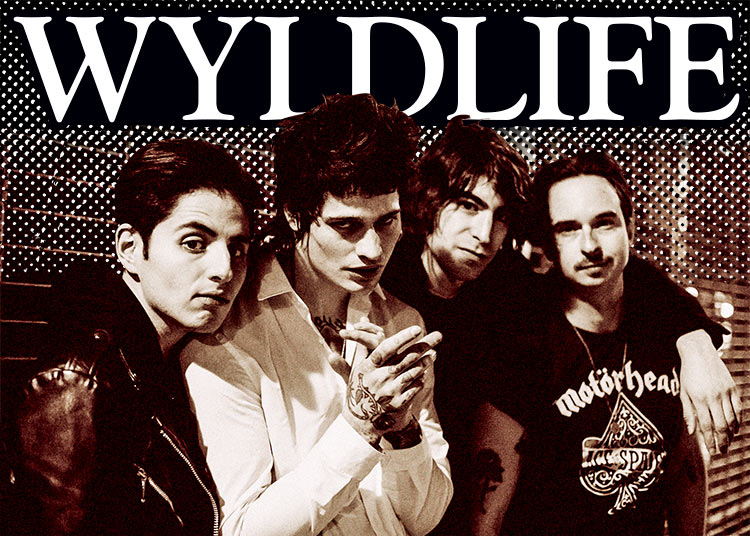 Them Wyldlife Boys are Out On Your Block with a wicked new LP. Their trunk is full of contraband and these dudes are on a mission to set the world ablaze with their songs, and they won’t look back unless it’s time to fix the mullet. Like the NYC heroes before them, Wyldlife are real, raw and don’t follow the straight and trendy trail to please the masses. They play rock ‘n’ roll that makes your heart beat faster and your fists scream. If you don’t know, now you do. Welcome to the Wyldlife! —Corey Duffel

You grew up right next to Sleepy Hollow, NY, which is rooted in a ton of creepy goth culture. How do you guys not sound like a goth band?

Dave Feldman (singer): Ha! Well, yeah, Sam and I grew up in Westchester County. The town we were raised in was 20 minutes away from Sleepy Hollow. I spent more time there as a teenager skating with Brian and Doug Brown and all the 2nd Nature heads. I love gothy stuff but that was never our intention to make a band that sounded like The Cure or Bauhaus or something. You definitely get that sense of boredom growing up in the suburbs, and I think a lot of punk and rock bands, as well as skateboarders, feed off an energy of being bored and wanting to let loose and escape.

You guys get compared to a lot of punk bands and a lot of power pop bands, but to me, I just hear a very New York City sounding band, do you know what I mean?

Someone said that Wyldlife was the sound of an infinite amount of influences. I think that’s a good way of putting it. We like Cheap Trick and The Raspberries and 20/20 but I don’t think we’re a power pop band. We love Johnny Thunders and The Dead Boys and The New York Dolls but I wouldn’t say we’re a punk band. I think you can take notes from all of those bands, you can be a little bit of everything, and you can keep people guessing and then not everybody has the same favorite song of yours. We don’t know what we are, but to say we’re a rock ‘n’ roll band is too vague. But I think the best NY bands are loud, slightly dirty, slightly sketchy and they look really fucking cool, so yeah, that’s us.

Do you think that aspect of danger still exists in NYC these days? And why do they call you Dangerous Dave? You seem like a nice kid.
I’m the only one in the group who lives 15 minutes away in Jersey City, but even I can say that New York has gotten tamer by and large. It’s not like it was in the 1970s. We carry nostalgia for stuff we never even saw firsthand. A lot of punk rock kids do. Their memories exist from coffee table books and records. That’s how it goes: there’s too many people on the Earth and only the rich can survive, so we look to the past for what looked and sounded like a cooler time. But even so there’s still a NY attitude and a grit of “go fuck yourself” that will always be there. Your life and my life and our lives will always be as crazy as we decide to make them. And the four of us like it a bit fuckin’ wild, man! As for my nickname: you’re right; I am a nice kid. It’s more because I’m a danger to myself.

I saw the video for “Contraband.” You’re a fucking skate rat and a rocker. Why did you guys decide to dress like cops, the mortal enemy of both skaters and rockers?

Bad Lieutenant with Harvey Keitel is one of the best movies, and Law and Order SVU is one of the best shows on television. Whatever your thoughts are on the police, you can’t doubt that they possess a lot of power, and that’s why so many of us hate them or are scared of them. They can shut down your party, end your show, they can throw you in jail for riding a skateboard. So we just thought it’d be funny to do a role reversal in there where we become the cops and hold all the cards.

Your newest record Out On Your Block came out on Wicked Cool Records, which is run by Little Steven Van Zandt. How the hell did that happen? Have you guys ever met him?

Fuck yeah, we met Miami Steve a few times. He’s awesome. He signed us so obviously he has good taste. Ha! He’s exactly like Silvio from The Sopranos. He wasn’t even acting when they made that show. And even though Wyldlife doesn’t sound anything like The E Street Band, SVZ just has his ear to the ground. He heard our last album that we put out ourselves and decided to make a move this time around.

I think a lot of people would be surprised to hear you guys are all college graduates. What’s up with that? You’re a really smart young kid, you say you love Paul Westerberg but your lyrics are about drinking Bud Lite Lime and girls and shit. Are you trying to pass yourself off as dumb?

Yeah it’s true. Spencer and Sam went to school at SUNY Purchase for printmaking and sound production, respectively. Stevie went to the NYU School of Business, so I guess that makes him the most professional, but he works for a bank and is gonna go postal pretty soon, I think. I graduated from CUNY Baruch in Manhattan for journalism and creative writing. We can write smart and play dumb, and we do. You just gotta keep people guessing. The second they can label you is the second they lose interest. The smartest guy in the room is the guy who might look and sound simple but is a closet genius. Paul Westerberg actually did a great job at that. He’s one of the best lyricists and I think what he does really well is take some trite concept or phrase and twist it around, stuff that’s right in front of you. Or he can write a song like “Fuck School.” You know, like him, no matter what, our songs and lyrics are always honest. Bud Lite Limes are the best. Daddy Sprites for life. I’m drinking one right now!