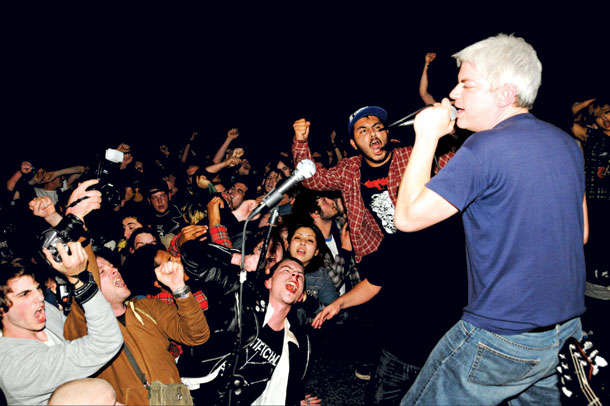 Posted: October 28th, 2009
"a real important part of rock and roll is being able to make a fool out of yourself"

The Midwest had a very unique punk scene in the ’80s. The one band that stood out most from the others were the Zero Boys. Fast songs with a poppy feel to them, more singing than yelling. Their first EP, Vicious Circle, is a classic that belongs in any punk collection. They recorded a second album but broke up before it was released. Now, they’ve finally put out the tracks on the album History Of. To promote the release, and re-release of Vicious Circle, the guys reformed the band and left their home of Indianapolis, IN, to play a couple shows at 924 Gilman in Berkeley, CA.  I spoke with lead singer Paul Mahern after the show.

It’s been 30 years since you guys formed. What have you been up to?
Well, the band officially broke up in about ’83, ’84, then we kind of sporadically got back together to play shows here and there.  Also, Tufty, our bass player, was in  Toxic Reasons and he owns a rock club now. Our drummer Mark is a full-time drummer who plays in several bands. Our guitar player, Vess, is the bass player in the Lemon Heads, and I make records. I’m a recording engineer.

You have a label and worked with  John Mellencamp?
I had a label called Affirmation Records  and I do work with John Mellencamp  from time to time.

I heard you’re a yoga instructor.
That’s true, you’ve heard a lot. I teach a form of yoga called Kundalini yoga that’s really awesome, and I credit it to my ability at 45 to still be able to be doing this.

How’d you get into that?
A good friend of mine invited me to a class and I really liked it because it isn’t the kind of yoga where you hold one posture. There’s a lot of breath and a lot of movement, it’s a real dynamic form of yoga and I’m a real moving centered person. It just appealed to me, to be able to quiet my mind as well  as be active.

The last time you guys played  California was ’82.
That was a huge show at The Barn in Torrance, CA, with Minor Threat and  Dead Kennedys, and it was amazing. It was the first time we’d seen hundreds of people getting into a punk rock show. In the Midwest the shows were a lot smaller.

How was then compared to now?
This was great, very similar energy.  Thirty years later that energy still lives on.

Is the song “Hightime” a mockery  of stoners, or does it reflect who you  guys were?
It’s more complicated than that. It’s neither. We weren’t a straight edge band or a hard partying band; although, our guitar player who did die in 2001 of a drug overdose, he wrote “Hightime.” It’s something that he really struggled with a lot. So there’s this kind of pro-party vibe and this kind of anti-drug vibe and that comes from him. He was always flipping from trying to be real clean to slipping and falling on drugs.

How’d you guys develop your sound?  Who were you guys listening to?
We were listening a lot to the Dictators and the Stooges, MC5, the Ramones, and the  New York Dolls—all of the bands that you’d be listening to in ’78 and ’79. I think our EP is based on that sort of thing. And then, to be completely honest, we started hearing bands from California that were playing faster like Black Flag and Circle Jerks. We were huge fans of the Dead Kennedys’ first album,  Fresh Fruit for Rotting Vegetables. It just appealed to us because we were really young, playing faster, and we had short songs that were more ideas than complete thoughts.

Any advice or last words for  younger bands?
My only advice would be that it has to  be fun first. Rock and roll is just about  having fun. I think a real important part of rock and roll is being able to make a fool out of yourself and not being able to take yourself seriously. In order to be able to do rock and roll right, whether it’s punk or whatever, there has to be a sense of humor.  If you aren’t embarrassed by what you’re doing you aren’t doing it right. Way too many younger bands are playing just like other bands, and that’s okay when you’re first starting out, but people need to break away from that as soon as they can.