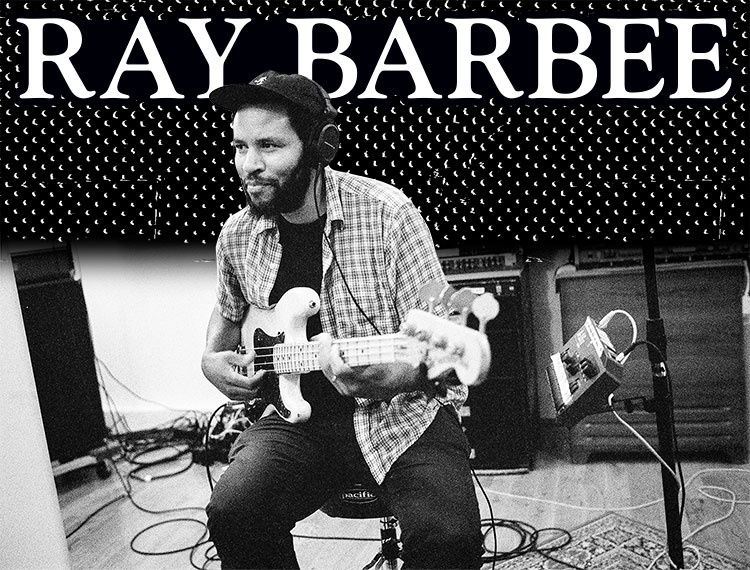 After trading a guitar he wasn’t using for a synthesizer, Ray Barbee started putting together the pieces for his latest release, Tiara For Computer. Equal parts wild synth and creative collaboration—and driven by at least 80-percent enthusiasm and excitement—Tiara is Barbee’s most recent effort to apply skateboarding’s uncertain techniques to the signature step-hop soundscape that he’s become known and respected for. —Gern Blanston

Tell me about this new album,  Tiara For Computer.
Let me just start off by saying, it’s an album that grew. Independent trucks reached out to me to do a signature-truck capsule collection.

Your name would be on the trucks?
My name, yeah, but a graphic, too. For mine, they said, “Hey, we reached out to Thomas Campbell to see if he’d want to be the artist for it.” The typical thing would be to collab with Sean Cliver, but we had just done something for Spitfire wheels. We worked together at Element, too. Sean still does my ragdoll graphic over at Element when they release boards for me. And so with this, I was excited to switch it up. Straight away, Thomas was like, “Let’s do a song to come out with the collection.” Right off the bat, I was, like, “I don’t want to do anything predictable. I don’t want to do a guitar thing.”  I was just uninterested in that. On and off for a couple years, I’d been learning synthesizers. I’ve always been intrigued with it: the waveform, the shapes, the modulation sources. It’s funny because I’d gotten a Moog synth a few years prior, but I was overwhelmed with the features, and it just kind of sat. I remember getting a book and trying to learn it. It was kind of a half-hearted approach, but I wasn’t at the point where I was, like, “I want to dig in.” Ironically, right before Thomas hit me up, I had picked up a Korg MS-20 Mini. It’s a reissue of an ’80s synth. I got that little guy and I was able to wrap my head around it. This was right before Keith Wilson from Indy reached out to me about the signature-truck project. I messed around with a song, sent it over to Thomas, and I was, like, “Hey, I got a new analog synth. Check out this song.” When we started talking about the possibilities, I was, like, “Dude, I’d love to explore this synth and just synthesizers in general.” Then I started thinking, I know Johnny Herndon from Tortoise would be down because we’ve been jamming together. I’d brought Johnny in with my son Nolan to do a song for Greg Hunt for the Vans video, Propeller. Johnny moved to LA a few years back and I’d always wanted to do some kind of project where I could come a little closer to where he lives creatively. I saw this as an opportunity. One thing that I got really excited about with approaching music with synths is just learning to be wild—making it something where Johnny could get in there and open up and do his thing. I just envisioned this wild explorative zone. We started going over songs and me and Thomas were going back and forth. He was, like, “Man, let’s just do an EP. You haven’t released anything in a long time. Let’s get five songs we’re excited about, let Johnny play on it and do an EP rather than a little single to come out with the truck. We’ll release it on Um Yeah Arts.” When we got into the studio, Johnny gets on these songs and me and Thomas look at each other and we’re tripping. It brought it to another level than we’d anticipated and we were, like, “This is an album.” It’s funny because it went from a single to an EP to an album.

Good stuff comes from making things happen, but not knowing what the end result will be.
You get it. I realized a couple things: You have to explore and switch things up. And there has to be a level of enthusiasm and excitement in it. That’s what the synth brought for me—this new level of enthusiasm. There was this regained sense of wonder toward the approach of writing music. I really got excited about the idea of, I’m going for this and I don’t know what I’m doing.

That’s the best.
I realized that enthusiasm and excitement could outweigh not knowing. There’s a window—it only happens once when you’re endeavoring in something new. There’s this small window where you function on 80-percent enthusiasm and excitement and 20-percent technique. There’s something special when you sit in that place. And you don’t sit there for too long because the more you do it, the percentage balances out a little, the technique gets a little more involved and then it just has a different thing to it. I was really more interested in what happens in that 80/20-percent zone. I think that’s why I have so many different interests. I’m just, like, What’s the next thing I can get into that zone with? Not to take anything away from developing your craft, because there are other zones. But this one only happens once. I had the opportunity to document it and do something fun, so we went for it. I’m so thankful that Thomas was down to go on the ride with me. I’m so thankful that Johnny was down to go on the ride—and Josh Lippi, Monte Vallier and everyone involved. I feel so spoiled to have such an amazing, talented community. It’s ridiculous.