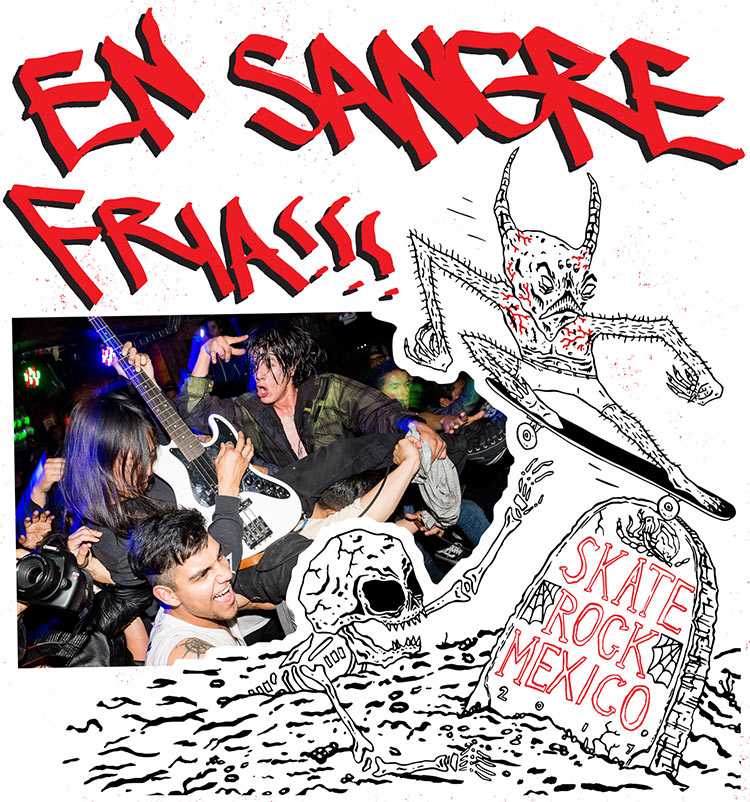 Always leave them wanting more. Get in and get the fuck out. That’s not only the way to do it, but it’s the way we have to do it. All is calm before the storm. And when our storm hits, it hits hard. Skate Rock is the ultimate shit-storm hurricane. Only the best of the worst join the squad and come to witness and take part in this alternate-universe Hell Ride. 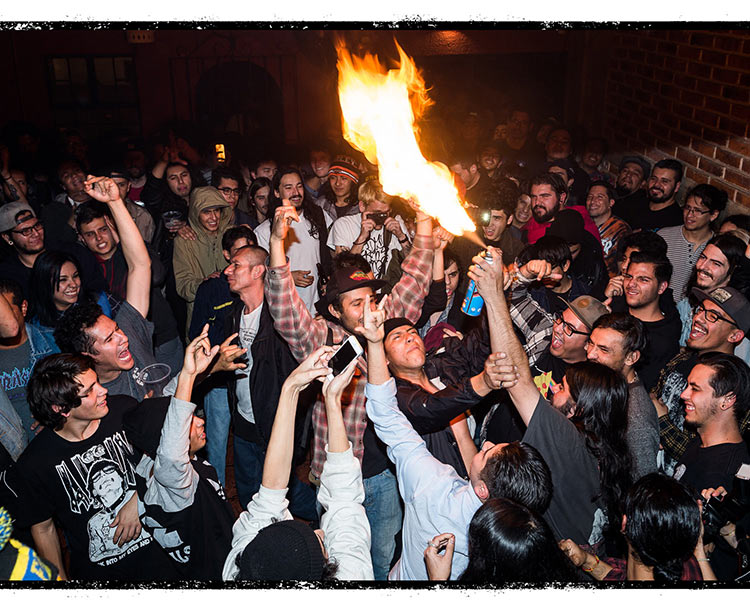 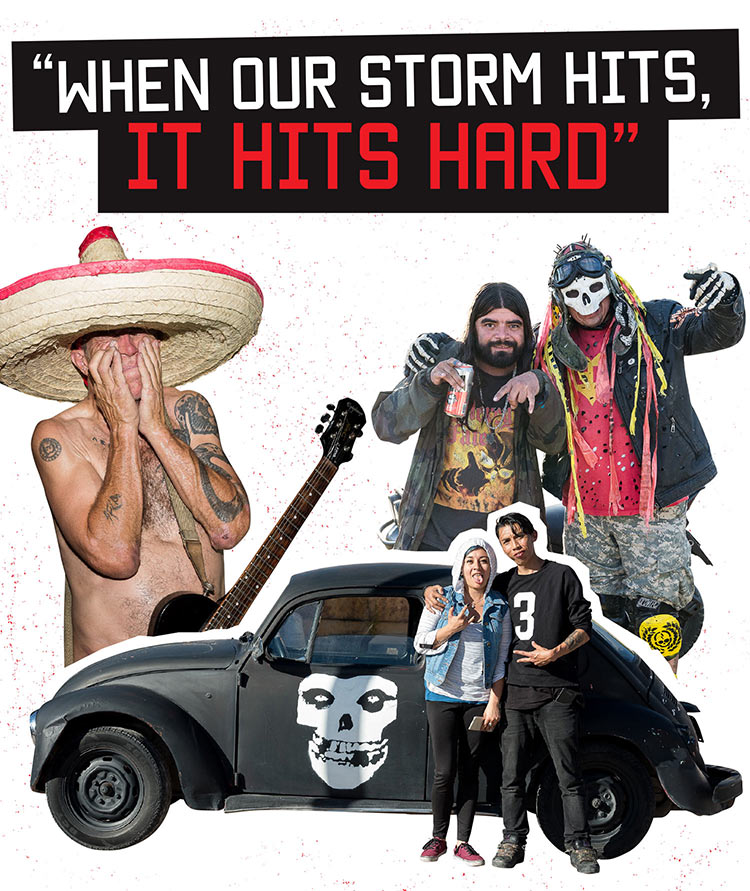 MEXICO CITY
Assembling in Mexico City is a no-brainer. It doesn’t get more central than that. With no gig the first night, we all kicked it on the massive marble stoop in front of the hotel. The energy and buzz from the beers, cigs and excitement of the road ahead kept us up ‘til nearly the break of day. Blasting jams, skating flat, breaking glass, all within five feet of the hotel entrance. They just looked at us like we were special needs and left us alone. 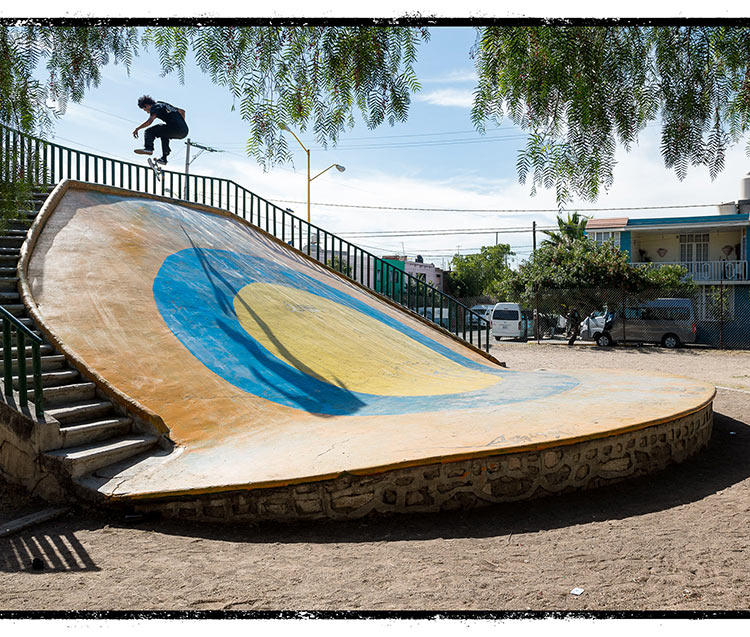 The car-crash clique was back together for the first time since the big bounce of South Africa. Rowan has been to hell and back since. Backside nollieflip into tortilla flats 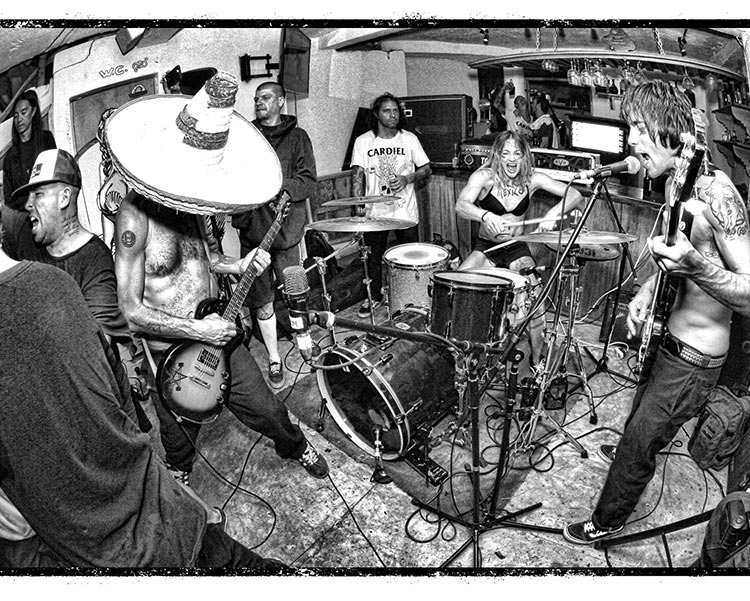 SMOKED!
Leaving Mexico City, we passed a broken-down food truck on the side of the road. The truck had its name written in huge letters on the side: SMOKED. One of us goes, “He got smoked!” So as we drove past, we all yelled “Smoked!!!” We ignored the fact that there was a cop assisting the truck owner. About two miles down the road we got pulled over. All the brew was inhaled and the cans shoved under the seats and the Mexi weed smoke was easily masked by cigarettes. After a brief conversation with our driver, the cop walked away. “What the hell was that?” We all asked. Seems the cop was concerned. He heard yelling from the vehicle and thought it could be a possible kidnapping. Just the norm down there, I guess. 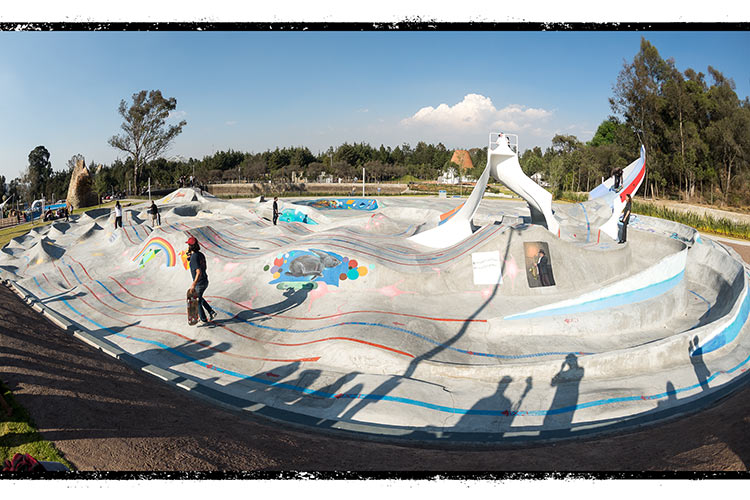 PUEBLA
No real way to explain the most tweaked thing I’ve ever skated. Parque Nacional Flor del Bosque skatepark is sort of like Chutes and Ladders meets Candy Land meets Santa Rosa skatepark on acid. It looks amazing but it’s totally fucked to skate. But in our gang, there’s plenty of freaks that get down on whatever is in front of them. We had a fucking sick session on the most obscure weirdness to date. For a Friday night, the show was a little soft there in Puebla: huge club, not a lot of heads. Bad Shit played like—well—bad. Shit. And Frecks got so sick on the beer and the altitude that Arctic didn’t go on. But the 40 ounces poured into Big Gulp cups were a huge hit. 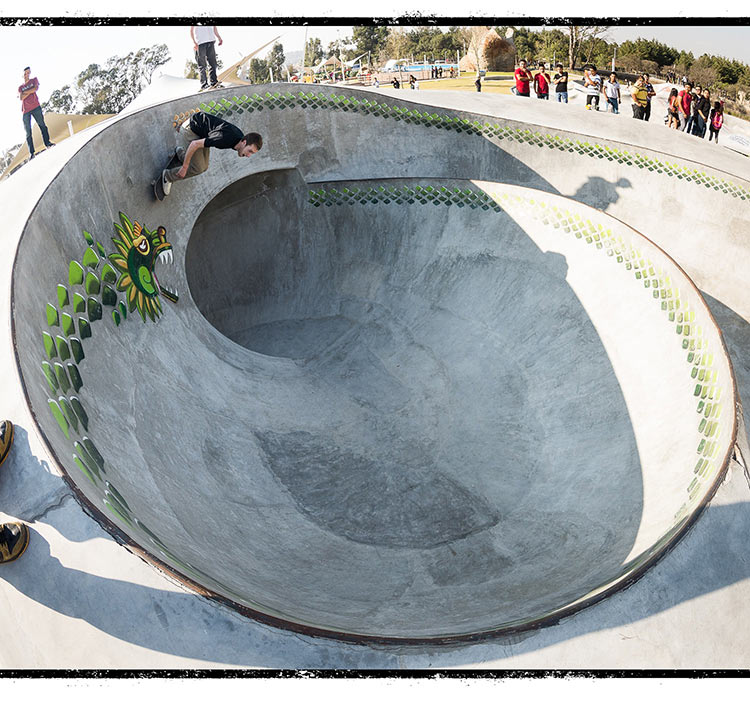 Grant on a downward spiral 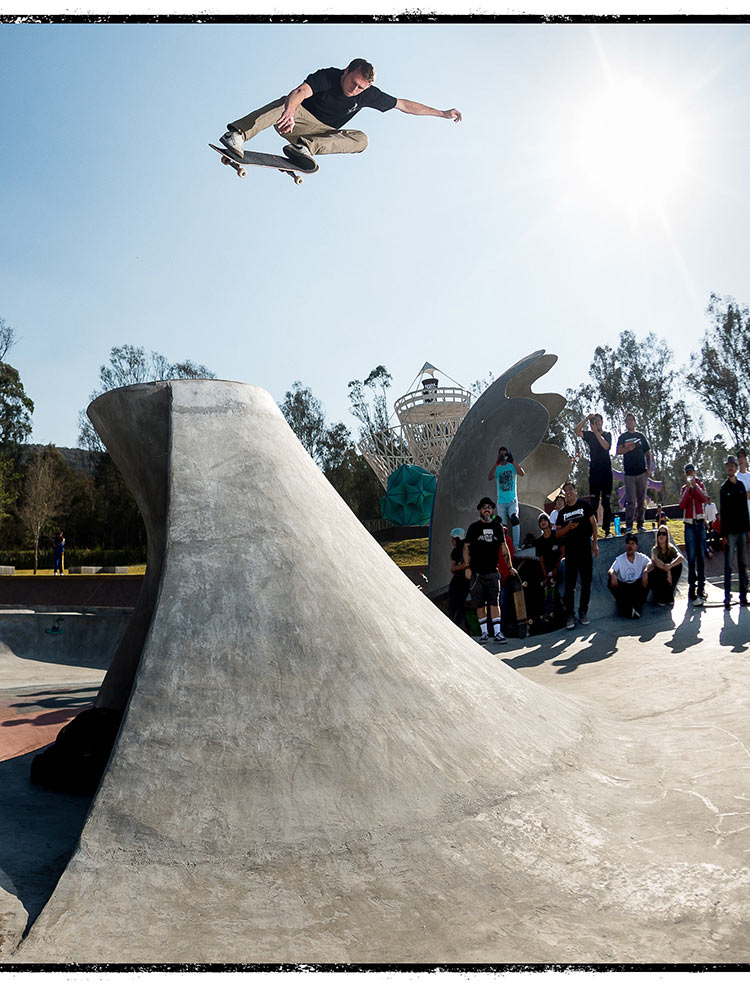 The dudes that built this park must have been smoking dust—Alice in Wonderland meets Pink Floyd. Grant Taylor drifts atop of the wormhole 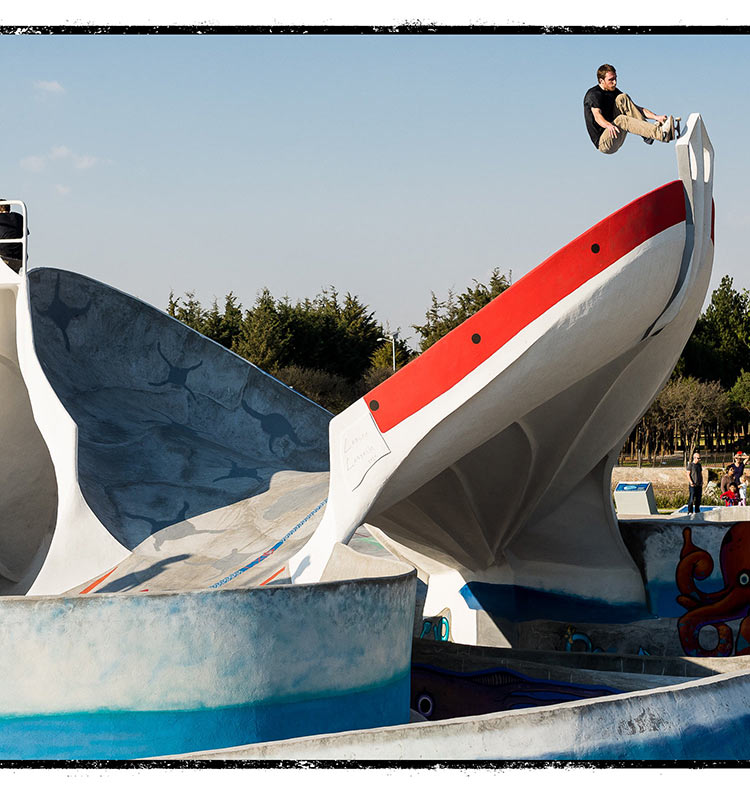 
BACK TO MC
On our way back in to Mex City we hit up the Cabeza de Juárez skatepark. Shit went off as usual. The bowls were right up Raven and GT’s alley, so call air traffic control ‘cause the boys are taking off! That session definitely set the table for the evenings entertainment. Same hotel, same old shit. Dumped our crap and headed for the gig. What can I say? Upstairs, overpacked house, high excitement. I’ll just say one thing: if you don’t want a shitload—I mean a SHITLOAD—of broken glass, quit serving us bottles with a smile on your face! Which is what happened and management threatened to shut down the show. Also, tables? No need for those fuckers in a situation like this so our boys took care of that problem by surfing and smashing them like beer cans. 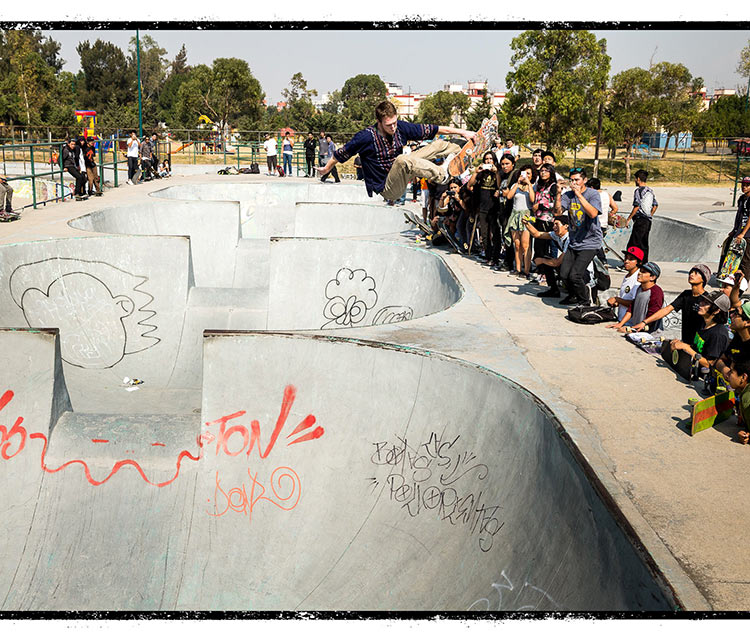 This park was brand new in 2003. Cardiel went there opening day and blasted off. Fourteen years later shit was broke as fuck. Perfect Skate Rock park. GT has one of the best FS airs in boardin’. Is that a dashiki? 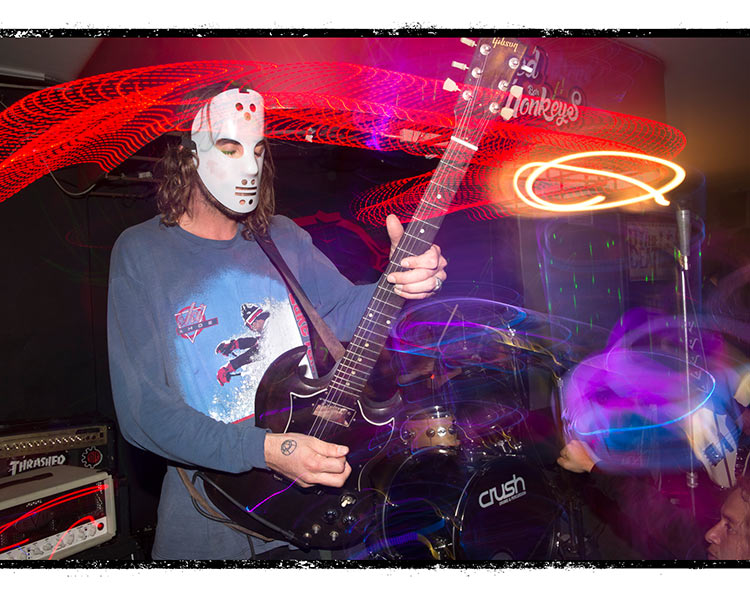 QUERETARO
Skated the park, ate pizza, watched Neck and Trixie struggle, Phelper ollied the box, ate a dimly-lit parking lot dinner of Cup O’ Noodles from the Oxxo before the show and no drinking outside unless you’re a local. Show was loud and packed and served burgers and fries. No stoop at the hotel so we piled in the parked van and drank ‘til the beer was smoked and smoked til the cigs were drained. 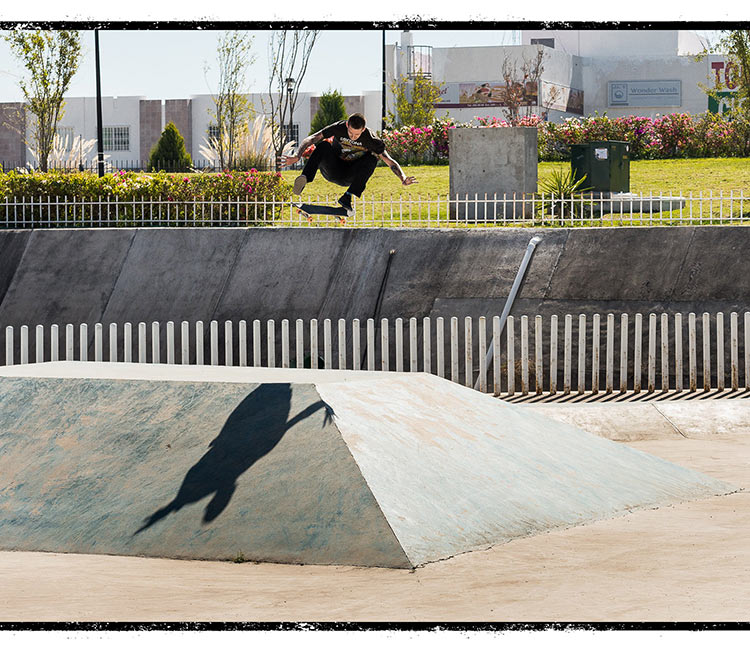 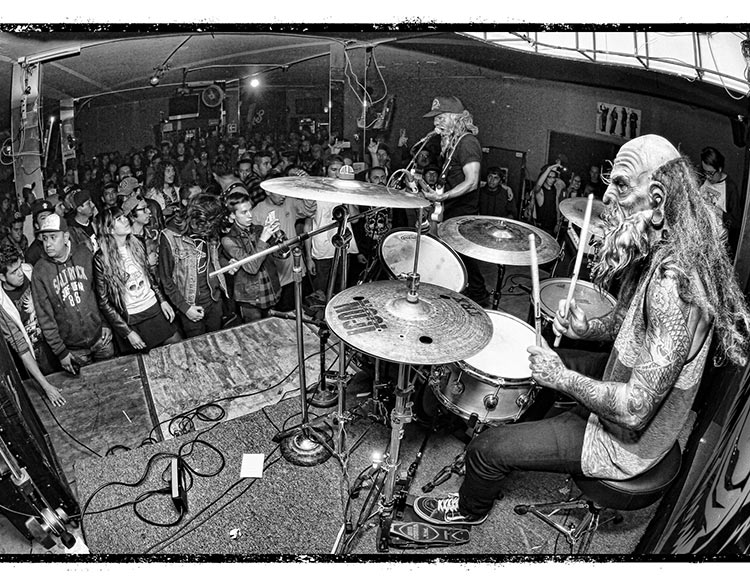 SWISS CHEESE
After Querétaro we had a much needed “day off.” We skated this sick old drainage ditch converted into a public park. Some parts of the year it’s filled with overflow but when we hit it, it was a go. Not much to it: washboard, boxes and a big oversized zit with random banks. A really fun one. Then we hit up some street spots. When you’re street skating you know the cops can come at anytime, but how about when they show up with machine guns?! This might trip some people out but I fucking love it! Turned into Swiss cheese for skating?! Not a bad way to go out. Actually, now that I write it, that would suck. 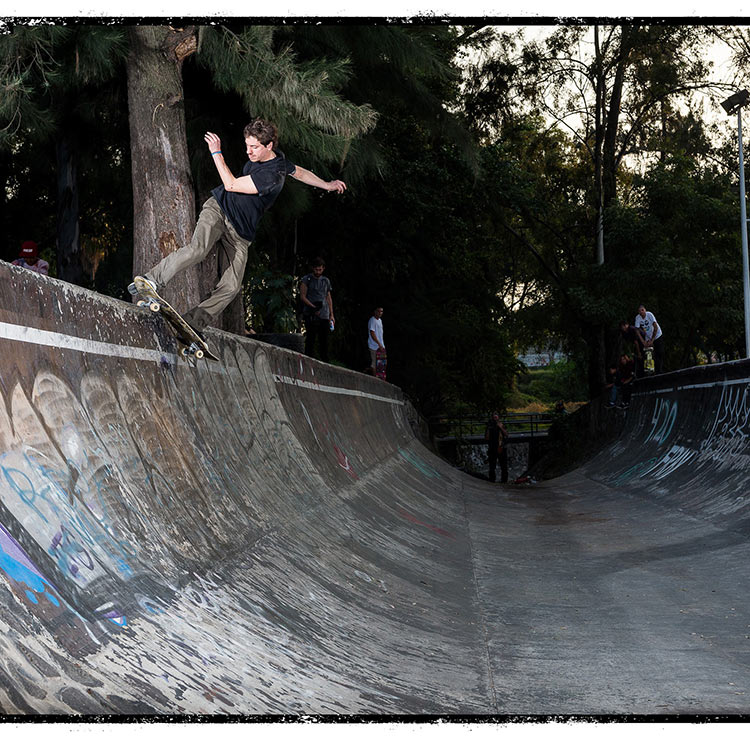 Ever seen Cory Kennedy skate? Freelance rip riding from the rafters that can only be described as ridiculous. Frontside overcane at that one OJ Wheels spot. Dude fuckin’ rips 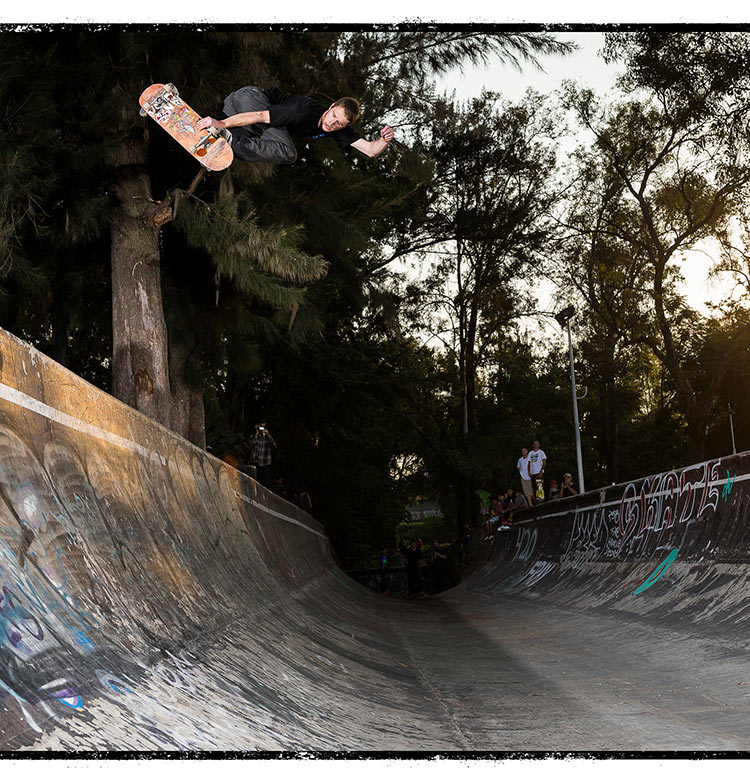 More Grant Taylor? Can’t go wrong with this one. Backside drifter at a little perfect ditch. Hey, we do house calls. Thanks to Monster, all of the Mexican bands and the skaters

PEI PARK
We roll up to a dead-end street at the edge of nowhere, bounce down a dirt road and—low and behold— there’s a massive skate pit built by some otherworldly beings. The stair section was like something from the Winchester Mystery House, there were quarterpipes that led to nowhere and hubbas with questionable kinks. But the rest of the floor plan was so fucking righteous, I was in awe. Everyone got a little piece of this one. Even Jake! He was all in until he took a solid digger, forcing his tectonic plates to shift and leaving his khakis in bloody ruin. Dave-O, driver of the Hell Ride Van, hit a parked car on our way to Aguascalientes, the sight of our next show, so we had to shuffle heads around so those in bands could make it on time. The gig was at a public skatepark and was completely surrounded by skate punks. We finished up the show just as it got dark and were told to get the fuck out of there because shit could turn at any moment, so we burned out. 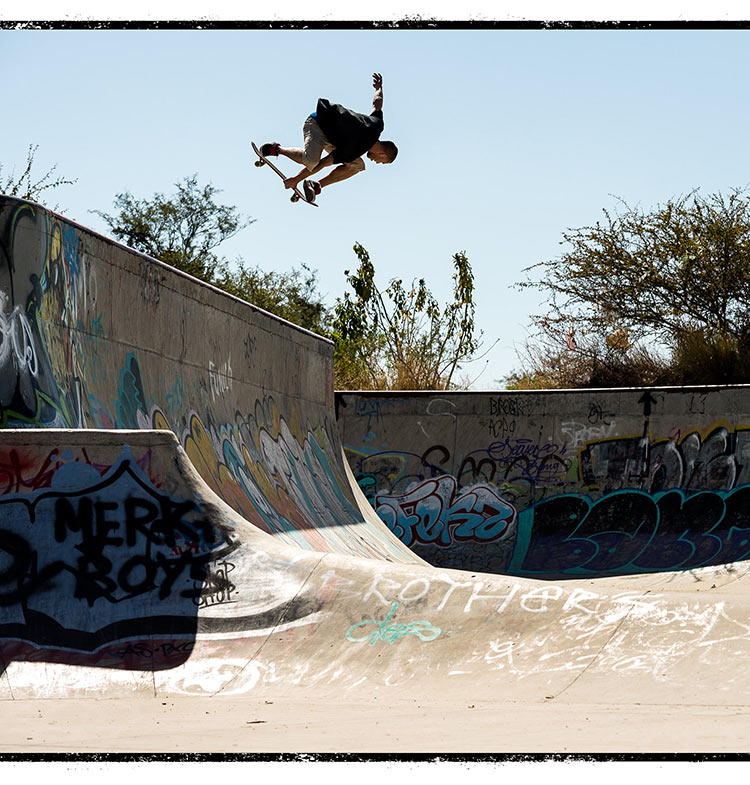 Raven Tershy is one bad-ass dude. He’s been hurt for about a year due to various bike wheelie and rap accidents. Ray came south of the border and went showtime. Indy diver at the most random spot on Earth

GUADALA-GNAR-GNAR
Got our cave, got some food at a restaurant that smelled like hamster shavings and went to the show. This one came very, very close to turning to the dark side. I think Cardiel played, then Los Viejos. Arctic was going to play third but no one could find Figgy, so Bad Shit came on stage in formation and—ZAP. Full power loss. We were standing up there for about five minutes waiting for a spark. By now the crowd is starting to chant something in Spanish, which I later found out meant pussies. There was a little spot behind the stage for the bands. We headed in and started formulating an exit strategy. Someone proposed getting on the roof and jumping to the next building, which was ridiculous because if we didn’t make it we’d just fall right back into where we were. So we decided to just march right out the old front gate. Neckface paved the way with a steady stream of crowd-suppressing spray-can fire and through the anger and sweaty bodies we made our way to the street. “What the fuck happened?” we asked someone. They told us that the club wasn’t letting anyone else in because they were over capacity. Some kids got really pissed off and cut the power line on the side of the building!  Wow. As we are walking away we were told the power was fixed and rocking could now commence. Fuck. Did we really want to wade back through a bunch of wild Mexicans and possibly never return? Yes. We did the full U-turn, went in and blew it out. You’re welcome, Guadalajara. After the show we spent the rest of the night in the hotel parking garage getting hammered and playing human curling with luggage carts. 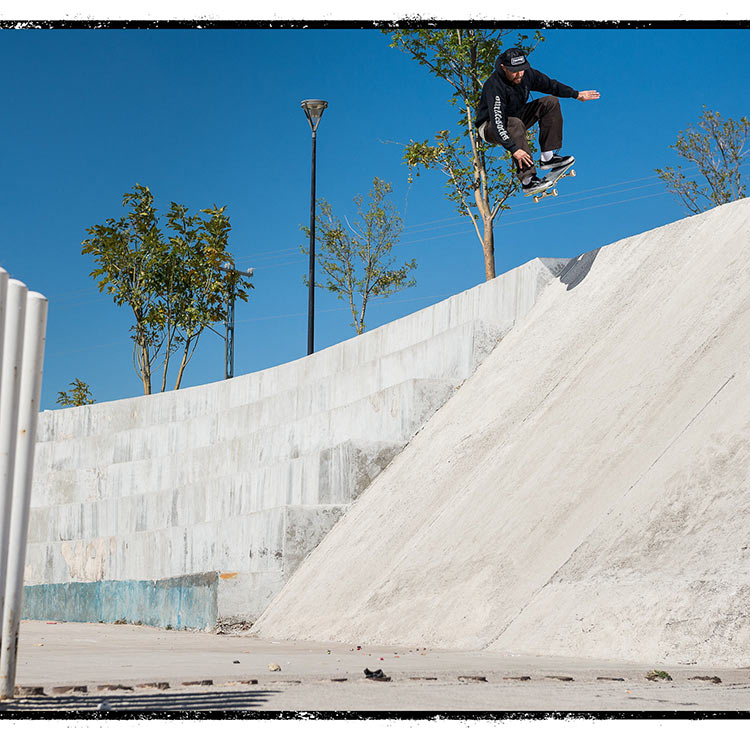 My lil’ friend Sean has had my back since 2000. Needless to say, Hell Ride life says it all. Ollie in

FACE, MEET FIST
Our driver, Blunt, stopped at an Oxxo on the way to Puerto Vallarta. I stayed in the van with Trix, just bullshitting, and I hear a diesel truck coming in hot and downshifting heavy. It stopped about 20 feet behind our van. It kinda felt like something was up but nothing looked out of the ordinary. Moments later we heard our driver got punched out by the guy driving the truck. He came up to Blunt and said, “Are you driving that van?” “Yes.” CRACK! I guess he took a friendly hand gesture the wrong way a few miles back and followed us to the gas station. Crazy shit! We roll about a mile down the road to Emilio’s sick skate compound near the beach. I was stoked to see our driver getting some anger out of his swollen face on his board. Shred, eat, drink and drive to PV. 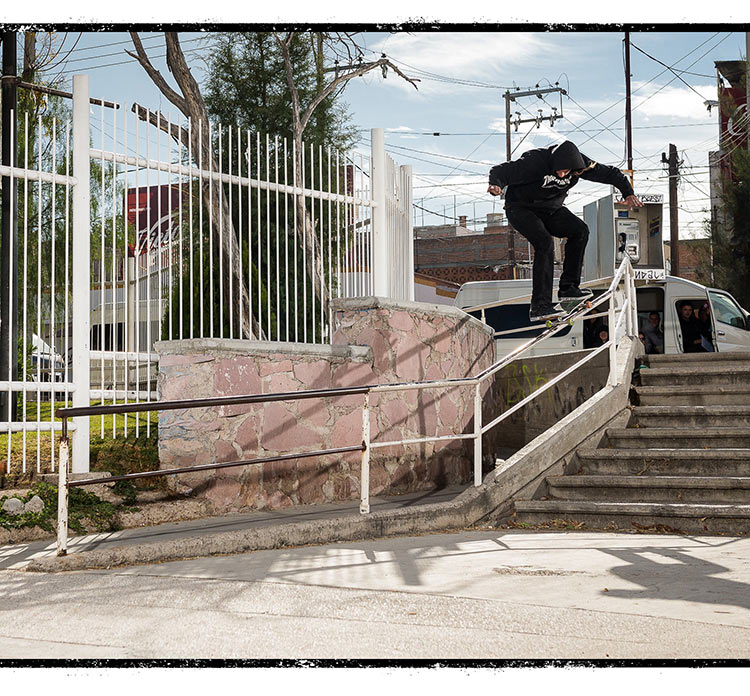 SAYULITA
With the last gig in our sights and a beach waiting for us, we hit the streets in Puerto Vallarta before heading to Sayulita. Sayulita is a sick little surf town that’s a little touristy but rad nonetheless. Before diving into our last gig we dove into the Pacific and kicked it like real tourists on the beach: we bought crap we didn’t need and ate food from sticks. We also introduced Hi-Lo to the locals, which went on for like an hour. Once satisfyingly filthy, we all kinda did our own thing in town until show time. The venue in Sayulita wasn’t really a venue, just an upstairs beach bar with capacity for about a baker’s dozen. But during the show it felt like a huge crowd. Hubbard and Cory took the pit award home that night for damn sure. My ears are still ringing. 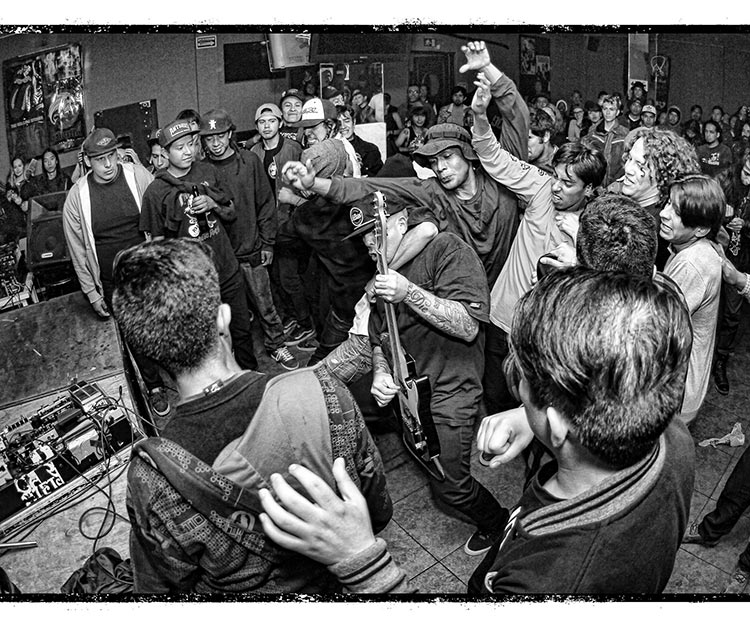 LAST RITES
The last day, someone got a tattoo artist to come and permanently ink this one in the Necronomicons. Shit took so long and our flights weren’t ‘til way later, so the hotel management ended up throwing us out on the curb. From there, we all said, “See ya next time,” and took our Ubers off into the sunset. 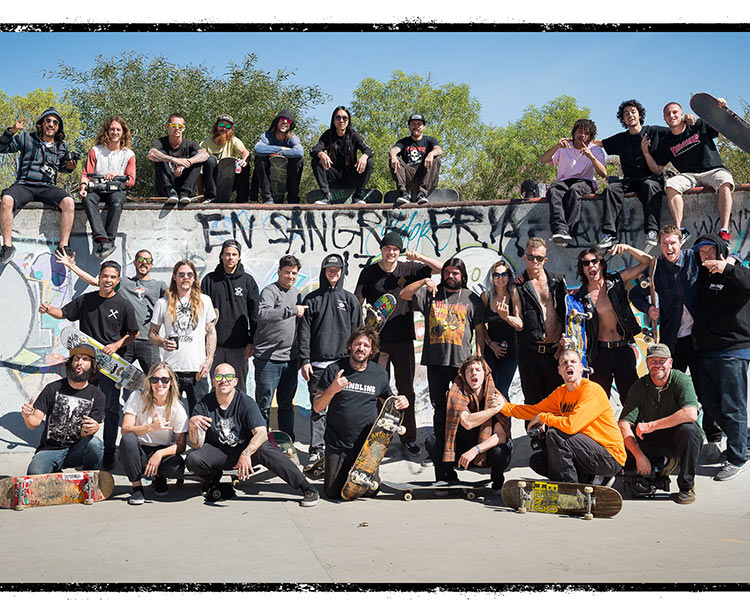 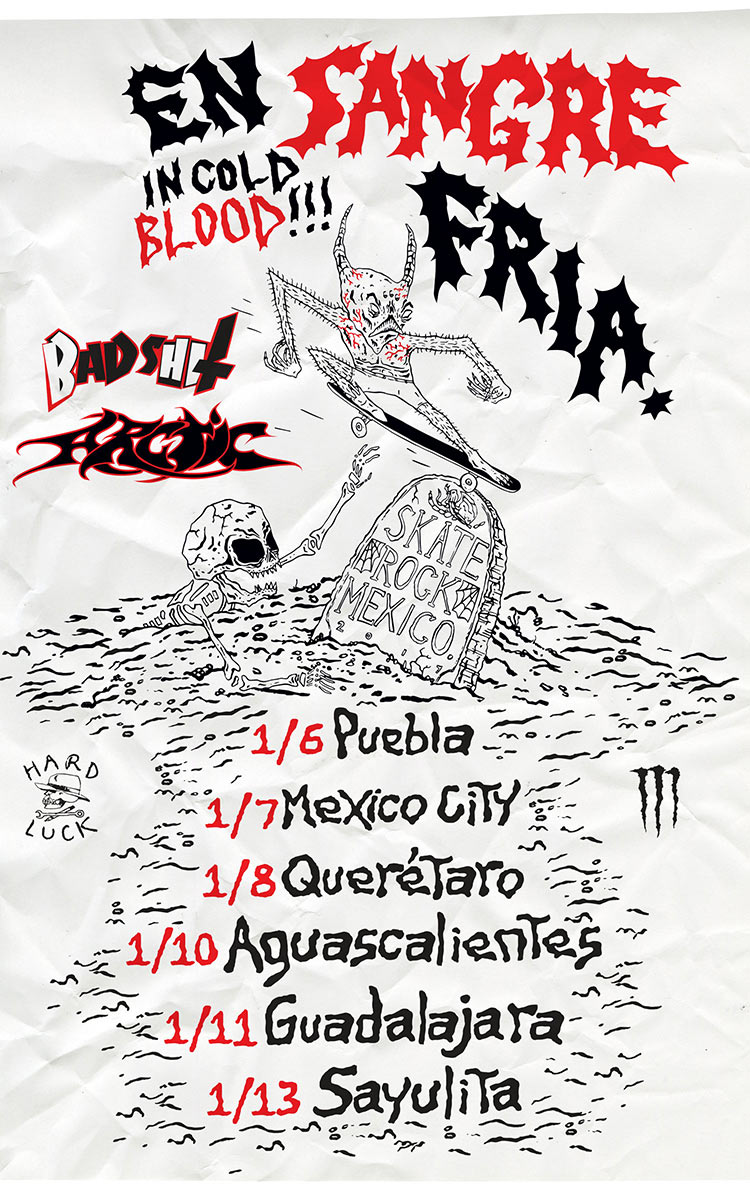 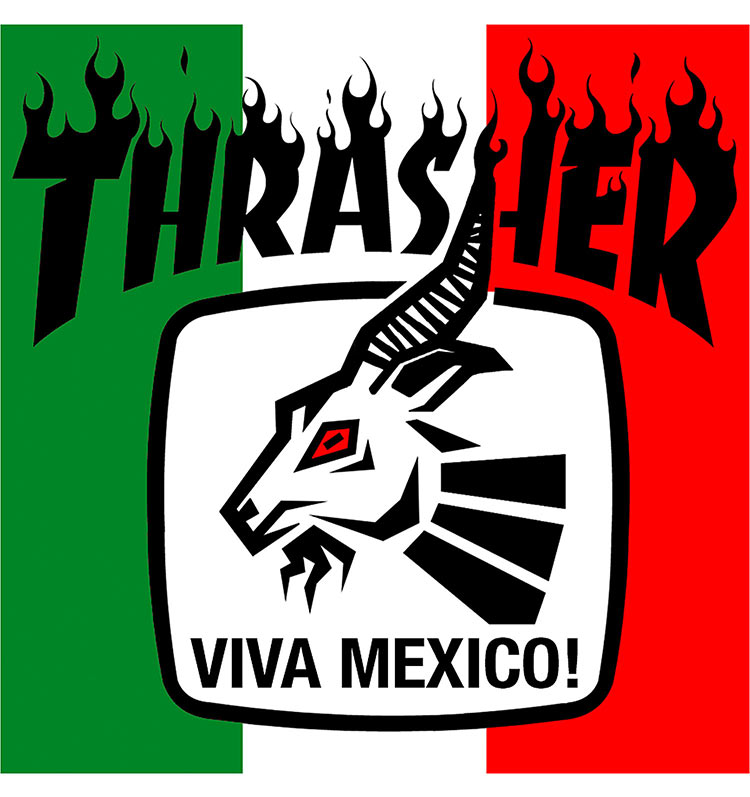