SLASH DOESN'T need an introduction. His work with Guns N’ Roses landed him in the Rock and Roll Hall of Fame and he’s often heralded as one of the best guitarists in rock history. His otherworldly guitar playing prowess has also been integral to the success of his other bands—the Grammy Award-winning Velvet Revolver and latest endeavor, Slash featuring Myles Kennedy and The Conspirators. The latter, which just released a live performance DVD called Living The Dream, delivered an album of the same name just last year. At the same time, Slash reunited with Axl Rose for a string of GNR dates. In between shows, Slash had some time to chat from his hotel room about his former life as a BMX fanatic, sobriety and how his recent stint with GNR has been one of the “most memorable periods” of his life. —Kyle Eustice 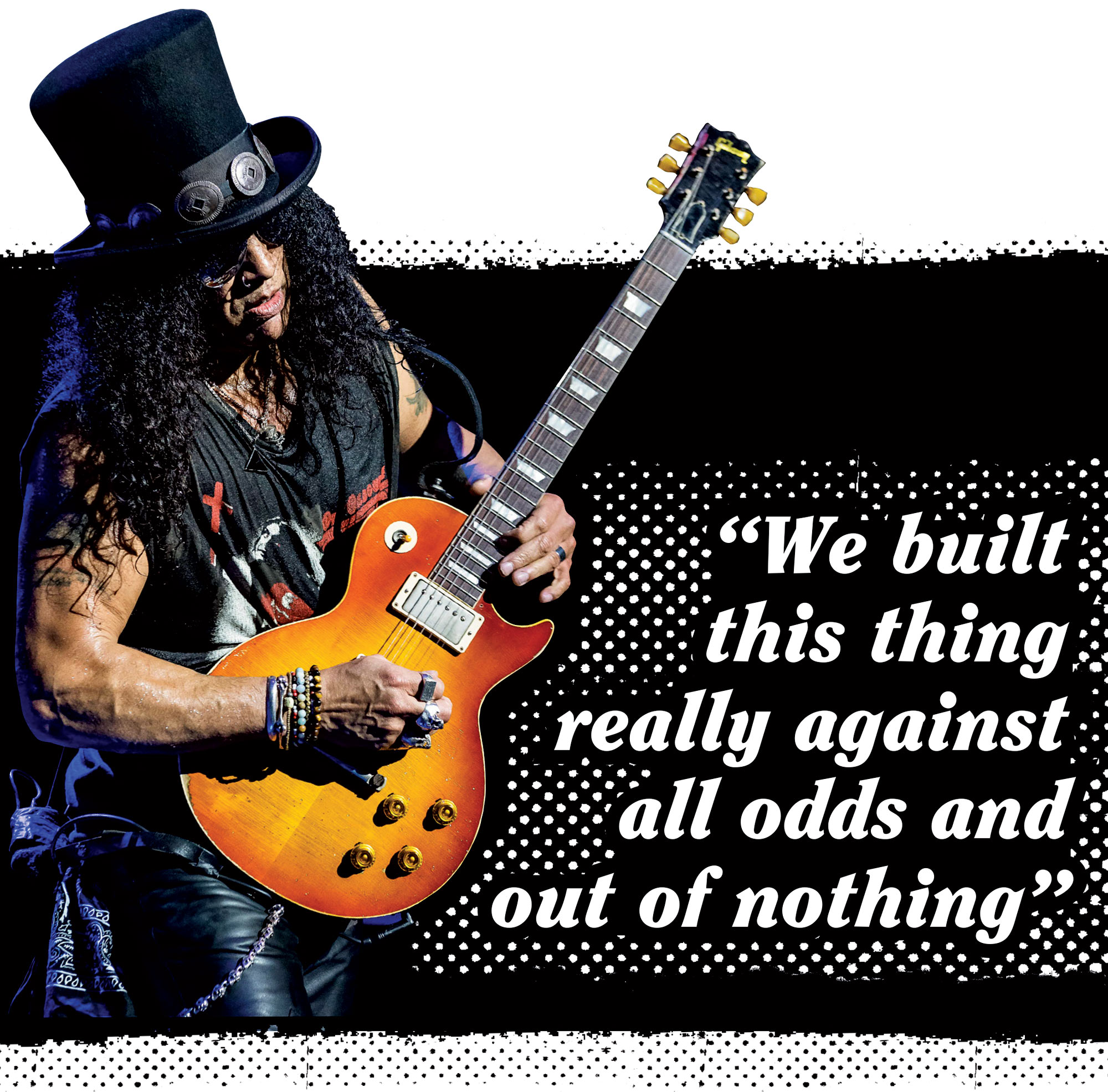 I heard you still read Thrasher.
I raced BMX for a long time, so I was in that culture of BMX and skaters back in the mid-to-late ’70s, up until about ’79. Later on when Thrasher came out, it became the skater’s bible. That’s the magazine I used to see all over the place, so I just became a fan of the mag. Both my kids, one of them especially, skates so it’s been kept alive this entire time.

It sounds like it’s been a part of your life since.
Definitely. It’s interesting to be talking to you right now because it has been such a major part of my life.

I read when you discovered the guitar, that’s when you put the bike down.
I picked up the guitar and then within in a 24-hour period, I went from my whole trajectory being BMX biking-focused to eliminating the bike altogether and just playing guitar. It was literally overnight and the bike just became a source of transportation at some point.

Do you ever get back on?
I have on occasion. It’s one of those things where as soon as I get on it, I know I’m putting myself at a certain amount of risk and it’s always between tour legs. It’s not the most practical thing to be doing. I actually have three of them hanging up in my garage and then my kids have them. But I’m a danger to myself and possibly to others.

So the BMX days are over, but obviously you built an incredible career as a guitarist over the past few decades, culminating with Slash featuring Myles Kennedy and The Conspirators. I watched the Living The Dream DVD last night and you make guitar playing look effortless.
I remember the show really well. It was a fun gig. I think it was a pretty good representation of us on this particular tour, but I haven’t actually watched it. I just listen to it to make sure the mix is good. If I don’t have to watch myself or the band live, I don’t. We’re in the middle of the tour and it gets in your head. I never really like watching myself anyway. It was a fun night.

Don’t worry, you looked cool as ever. Speaking of, I wanted to know the true story of how the top hat came to be. Did you really shoplift it?
Back in the days, I guess this was in 1985, Guns N’ Roses was playing at The Whiskey. I went down to Melrose and I never had any money. I was looking for something cool that I could wear at this gig. I went into this store, which was called Retail Slut if I remember correctly. I saw a top hat through the window, so I went in to look at it and tried it on. I thought, Oh, this would be cool. I looked around and no one was really paying attention to me. I just took a chance on it and walked out with it. I figured if they caught me, I’d just say, “Oh, I forgot it was in my hands.” Anyway, I went next door to this other store called Leathers and Treasures, which was this really cool vintage leather shop. I grabbed a concha belt hanging on these racks and walked out with that. I went back to the apartment that me and Axl were living in, cut it up and put the concha belt around the hat. I wore it that night and it just became a thing. I think the hat was good for me to be able to hide behind. As a performer, I don’t do eye contact and all that type of shit. It just became my thing and it has been ever since.

I’ve pondered how many pairs of sunglasses and hats you actually own.
I don’t collect them or anything like that. I have two top hats, one that I just got recently. They are two nice ones. The other ones are just the felt ones you buy in any hat shop. They cost about $60 and they last about the length of a whole tour, depending on how much rain is involved. I don’t really collect them, but I have about eight or 10 laying around at home.

I admire you for getting sober. What made you finally say enough was enough?
There’s a bunch of different factors, but the first big signal is when it goes from being fun to being miserable. There’s this shift from one to another that you don’t see coming. It just sort of happens. At one point, you’re doing a lot of drinking and drugs, which was more or less fun, then it becomes a burden and a dependency. It turns in a dark direction. Then you start to see it impact everything in your life. And you struggle on and then you finally have to come to terms with it and admit it to yourself that you’ve gotten to a place where you’re not happy and it’s not doing you any good. Then you have to take a stand and do something about it. Getting from the nucleus of the idea of it not doing you any good to actually doing something about it seems like it takes forever. It’s hard, but I definitely got to a point where I wasn’t having fun anymore and it was having a negative impact on what I do as a musician. On top of that, I had two kids. I was raised in this industry. I was raised in the very liberal ’60s and ’70s and so I saw a lot of kids who had parents who were just vacant. I didn’t want to be that. I had all these different things coming together to push me to get my shit straight. It was really good. It was one of the most important things I’ve done in my life.

That’s huge, especially coming from that whole “sex, drugs and rock-n-roll” lifestyle. It’s almost beginning to seem like a thing of the past. Have you seen that among your peers at all?
All things considered, most everybody I hang with or work with have come to terms with it in some way, shape or form. Most of them are sober. If they aren’t sober, they’ve always kind of been normal and didn’t take it to the level I did. It seems like the attitude toward that whole lifestyle, that cliché of sex, drugs and rock-n-roll, is really diluted at this point. It’s around, but it’s not like it was. I’m not even going to say in the ’60s but in the ’80s and ’90s, I think over the last ten years, the peers have lightened up.

I don’t want to see all of our legends keep dying.
We have this sort of new trend of people having depression, which is not necessarily drug related. It’s interesting because the opportunities for therapy have obviously, in recent years, risen to a level of prominence, more so than ever. We had kids dying of overdoses all the time that probably had depression back then but just didn’t realize it.

It’s good that a dialogue is starting around it.
That was the other thing—there’s the whole pharmaceutical thing that has been so major for so long and not everybody was aware of it. When I quit, I was using OxyContin at that point. That was never around. Kids have been doing opiates way more. It’s interesting to me how things develop and the impact they have and how kids in society sort of change and habits take on different appearances even though it’s kind of the same thing.

I think it’s great that artists with big platforms are even talking about it or saying like, “Hey, I’ve been there, but I was able to get clean.”
It’s really healthy to have people in the industry who were kind of poster boys for that kind of lifestyle to be able to turn it around and say, “You know what? It’s not what it’s cracked up to be.” Having that influence can show people you don’t even have to go through that. It’s having a really positive impact on kids who think maybe that cliché of you have to be high or drunk to have fun. They can see there’s an alternative and it’s like, Well, these guys are doing it and it has nothing to do with that.

I bet your kids really look up to you.
It has to start somewhere. They’re very aware of it, for sure. My older son is a musician so he’s very aware of it. Even my younger one is more aware of some of the things I went through when I was a younger. I made a big change when maybe he was about a year old. He knows the impact that drugs and alcohol have.

I heard you’re doing the first ever Guns N’ Roses show in Lincoln, Nebraska.
I’m excited about that, too. When bands have been around as long as we have and we get to play a place we never have, it’s exciting.

Do you get something different out of a Guns N’ Roses show than you do a Myles Kennedy and The Conspirators show?
For me, I’m just a player that really loves writing and performing. With Guns N’ Roses, that’s where I come from, so it has a really important meaning for me. We built this thing really against all odds and out of nothing, so that for me is my home base. When we go out and play, there’s a certain type of chemistry and a certain type of energy that only exists in that combination of folks. It’s a lot of fun. Obviously, I was gone for a long time and when I came back into it, I didn’t know what to expect and it ended up being one of the most memorable periods of my life. With the Conspirators, it’s very simple, straightforward and raw. It’s very in-your-face kind of rock ‘n’ roll. It doesn’t have all the grandeur of the Guns N’ Roses thing.

It’s amazing to see the kind of longevity you’ve had. Hats off, no pun intended.
Ha! It’s great for me too all these years later. It’s very humbling that I’ve been able to make a lifelong career out of something I love to do. It’s something where I stop and am really thankful for all the time.