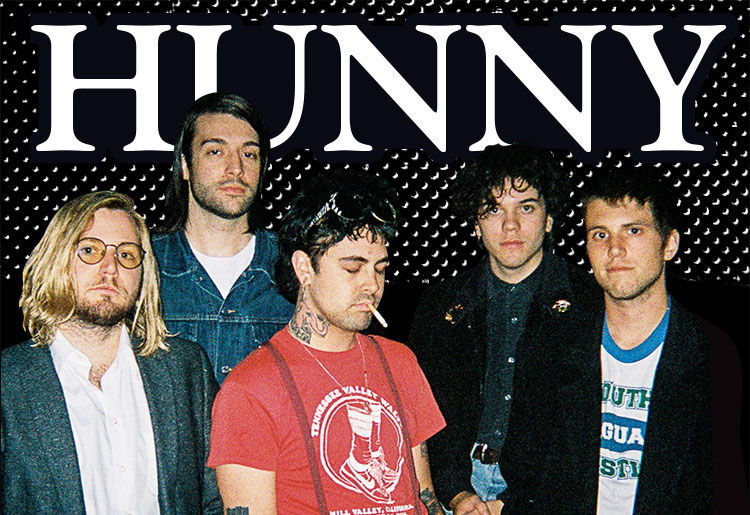 Going to a Hunny show is an experience. They meet every criteria for the perfect pop band: charismatic with a touch of broodiness, a frontman that climbs on speaker towers, posi guitarist shredding immaculately, synth wizard and tight and funky-when-necessary rhythm section. They create some sort of chemical reaction in fans, causing their legions to throw notes, flowers and other sundries on stage—a level of reverence rivaling the last uncanceled Morrissey show I attended. Just like Pooh Bear, it is easy to be obsessed with Hunny—these LA rockers are total sweethearts: pure, young and full of sugar. Singer, JZN, and I talked about music, skateboarding, babes, anime and the meaning of life over some extra-cheese pizza. Kevin, Jake, Jazzy Greg and Joey, there was only enough pie for two of us but you made it in the Bible. —Corey Duffel

How long have you been waiting for an interview in Thrasher? I couldn’t tell you guys were fans because you cool guyed me so hard at that first show when I met you.
I still can’t believe it, actually. I feel like I’m cheating by getting in the Bible with playing music instead of skateboarding. Twelve-year-old me is still mad that it’s not for the latter. That first show we met you at, we were just trying so hard not to freak out on you.

So you just broke your ankle skating. Will you continue the tour on crutches?
Yes, hopefully I’ll be good before we hit the road next month. If not, I’m gonna have to take a page out of the Dave Grohl book and get myself a throne to jam from on stage. Fingers crossed.

What is your favorite boxed wine?
As long as it’s cheap and red, we’re in business.

Tell me about the series of EPs you guys are working on. What’s your beef with the full-length album? Will you ever release a full-length?
Yeah, that’s probably the best way to put it. Besides a couple singles on 7" flexi discs, we haven’t put anything out in awhile. We’ve been writing songs like crazy the last couple months so we figured we should make up for lost time. The whole operation is essentially gonna turn out to be a double LP. We love albums but the attention span of 2017 makes it a little difficult for anything to stick or really be impactful. We could drop the “long-awaited debut album” and two weeks later the kids are on Twitter asking for new shit. We realized it’s probably better for us to be ahead of the whole thing. Put the new shit out before they even have a chance to ask. We’re taking cues from the mixtape community. Rappers are coming up everywhere by just blasting the world with content. We want to be at the forefront of that with rock music. A regular full-length will come out of us one day, for sure.

Tell me about Hunny outside of the jar. What do you guys do in your spare time?
Most of my spare time is still spent with Hunny, to be honest. Between making demos or our shirts and art or writing lyrics, this band takes up most of my time. All of us are always writing new music anytime we can for the most part. I hang out with my dog a lot. Other than that, mostly video games and skateboarding. Some things never change, I guess.

What does “never” mean to you?
It’s a nice sounding word that’s good to use in lyrics sometimes but we don’t like using it too much unless it’s like a, “We’re never gonna do shit the way these other bands do,” kind of thing.

I know you’re focusing more on music these days, but once a skater, always a skater. In your opinion, what are your favorite, most iconic skate parts and which of your songs would be a better fit for those parts?
This question is fucked. I know Jake’s are Rowley’s Really Sorry and Ethan Fowler’s A Visual Sound part and of course Rieder’s Dylan part. I have to go with the Klein/Kirchart combo in The End. The skating, the suits, the mansion, the journey—all solid. We would never want to replace anything with us, though, ‘cause half the bands we got into as kids were because of skate parts. We’ll go with being the song in your next part, Duffman.

If you had your own skate part, what song would you choose?
Dude, this is the best and worst question ever. I don’t know how many times in my life I’ve said, “Dude, this is gonna be my song.” I think of one probably every other day. Jake was saying the other day, funny enough, that he’d love to have a part to Wax Idols’ “Everybody Gets What They Want.” His go-to has always been “Electric Relaxation” by A Tribe Called Quest. Two opposite sides of the spectrum musically but equally good vibes. I think currently I’d go with “Erase You” by ESG or “Pow! To The People” by The Make-Up, though I don’t think I could put together enough footy of me doing front rocks and no complies over curbs to fill up either song.

What are some animes people should check out?
I don’t want this question to turn into a whole page so I’ll just say FLCL, Akira and Neon Genesis Evangelion are definitely my all-time favorites.

Flower of choice to wear on your lapel?
Depends on the suit. What I really need is a full-blown clown one that shoots water and everything, then I’ll be set.

Most importantly, which character on Sailor Moon do each of you guys identify with?
I’ll call dibs on Sailor Saturn. Kev likes Sailor Jupiter ’cause she’s a redhead. Jake’s gonna wanna be Tuxedo Mask. I’m giving Greg Sailor Neptune ’cause I think she’s the tallest. Joey can be one of the cats.