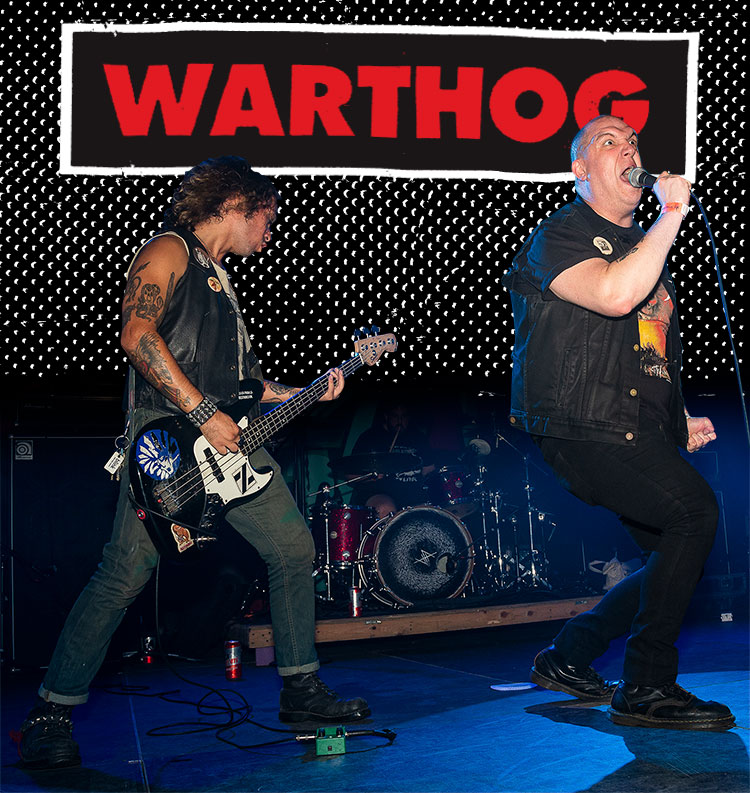 New York’s own Warthog came through the Death Match with the brutal guitars and ‘tude to back them up. Chris Hansell took some time to talk about the event, skating and their new EP.  —Jordan Joseffer

Who is Larry?
His full name is Lawrence W. Arthog. He is our friend and muse. He is 500-million years old.

He was ripping the ramp. Did Larry have a good time?
Larry thought the modern wheelie-board toy was amusing.

How did Larry die?
Larry is very much alive.

Phelper was into your set. Did you guys get a chance to hang?
I was talking to you about wanting to meet him and before you could introduce me he actually approached me outside and said that he thought Warthog was great. It was a bit surreal as he’s been the editor since I started reading the magazine as a kid. I never once thought we’d cross paths, let alone him complimenting my band.

You were pretty glued to the ramp the whole day. What were you most stoked to see?
I definitely found myself gravitating towards watching skating most of the day. I’ve always loved skateboarding but never fully got the hang of it outside of pushing around, landing a couple things once in a blue moon, but it never stopped me from going to all the spots with my friends and trying. I’ve always loved watching, too. Aside from all the gnarly shit I saw throughout the day, the really, really young kids skating the ramp amongst pros and other rippers was my favorite part. Seeing them get cheered on and supported every run, no matter what, was super touching. It reminded me of when some of the older kids at the local spot when I was a kid wouldn’t cool guy me and be nice to me even though I sucked ass. These younger kids were shredding, though! I’m glad that supportive attitude is still there.

What’s up with the new EP?
We wrote the four songs slowly over the last year or so and then recorded them this past June with Chris Bowman who tracked the last EP at Artifact Audio, which is a new studio in Queens—right next to where Death Match was, actually—ran by our friend Nate Patsfall. It was the first time not recording in a practice space and I think it was really beneficial to have a more open space to work in. It’s going to be out before this interview runs on Toxic State Records in the US and Static Shock in the UK. I think it’s the best thing we’ve done and it encompasses all of our varied musical tastes and influences into one record.

Where do you pull the ripping guitar leads from?
Larry honestly writes most of the songs and plays the leads on a lot of the recordings. He firmly believes that flesh on fingers gets in the way of good guitar playing.

How does New York influence your music?
Almost all of us grew up in close proximity to the City. I’ve never lived anywhere else. I don’t really plan to. New York has had a great crew of people doing new and exciting things, almost always, and that is a constant source of inspiration to me. It’s hard to get away with being lazy here.

What does 2019 hold for Warthog?
Heading to LA for some shows in January, going to the UK for Static Shock Festival in London in February and some other to-be-confirmed trips but hopefully just playing out much more in support of the record.