One bit of advice regarding profiles of upcoming skaters, artists or musicians is to NEVER proclaim: "Keep your eyes out, because they've got big things in store." That phrase is not just an obnoxious cliché but it may very well be a curse—perhaps even a kiss of creative death. When this expression is aimed at someone, history has shown that they will likely produce no big things, in a store or otherwise.

Dylan Goldberger has had this cliché hex placed on him repeatedly but he has broken its spell by producing rad stuff, over and over again. You may not actually know Dylan. But you know him. You know? His distinctive art has appeared in books, galleries, board graphics, and now a 1,500-frame animated onslaught of insanity called "5 Mile Grind." This collaboration with New York skate-punk band Slashers could only have come from the twisted imaginations of people who skate themselves. Watch the video above and then dive into our interview with Dylan. —Adam Creagan 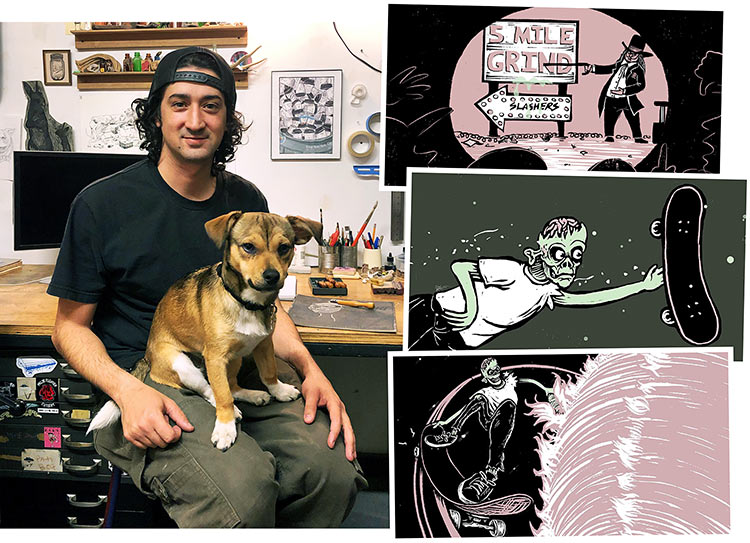 Let’s get this question out of the way first: how many hours do you estimate you spent making this video?
I have no idea. I did it over about seven months on top of my regular workload. I wanted to keep a tally of my hours to have some sort of reference for the next time. I was keeping track until I hit 100 hours and wasn’t even halfway done at that point. After that I didn’t really want to know how long it was going to take.

Describe the inception of the video. Did you work closely with Slashers on ideas? Or did they let you run with it?
I overheard Paco and Blake from the band talking about ideas for music videos and how they wanted to animate one of them. I decided that was as good a time as any to learn how to animate. I based the main character Slashy off of an illustration Andy Murphy had done for Slashers’ first demo and t-shirt. They gave me a rough outline with a couple of paragraphs and a few sketches of ideas for scenes. For the most part they gave me creative freedom. 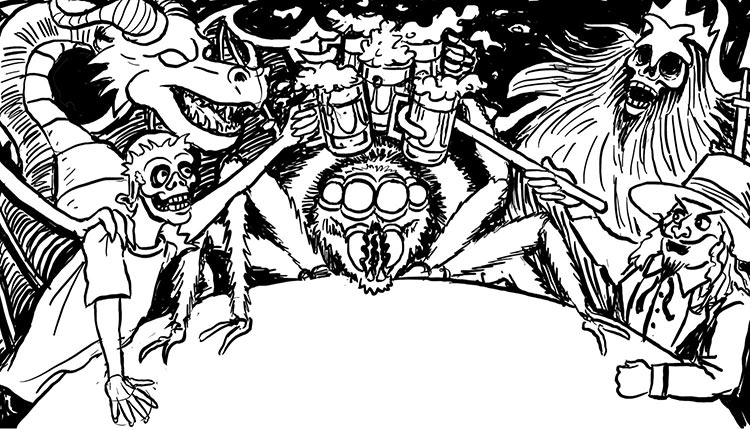 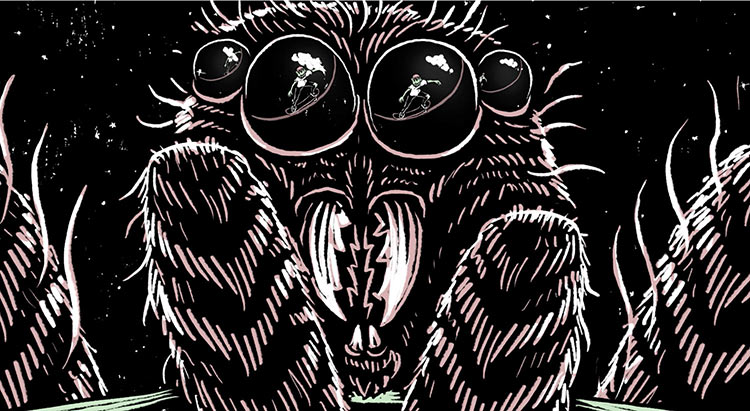 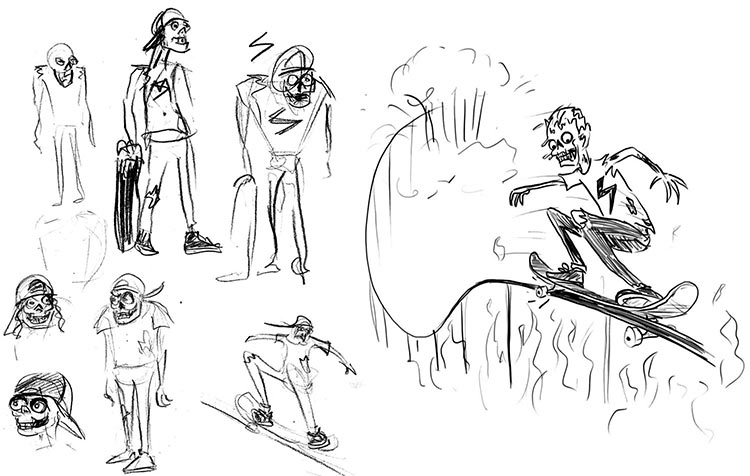 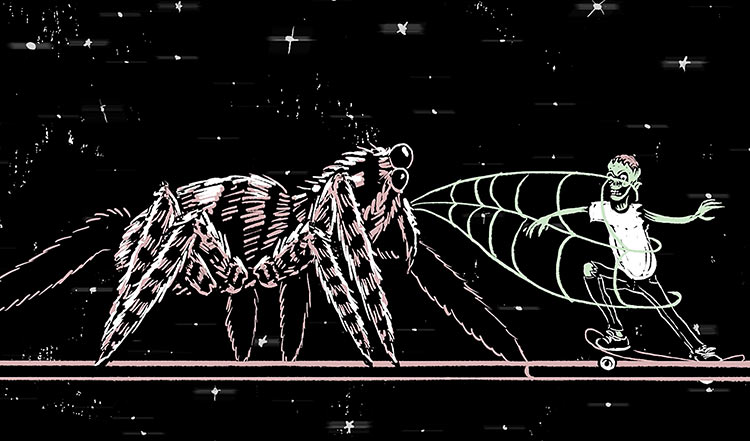 Some animations are a bit too computer-y. You can see the motion paths and key frames doing their thing. But you incorporated A LOT of individual hand-drawn frames. How did you find a balance between hand-drawn frames and computer assistance?
I only really used computer-assisted animation to move the backgrounds and to pan the camera. While that was happening, there is also frame-by-frame animation happening too, so it blends in nicely. Another good trick I learned when doing these camera pans is to slow into the movement and slow out of it to give it a more natural effect. Also, making the computer-generated pans move at the same frame rate as the rest of the animation keeps it all looking natural.

What were the various steps of creating this video start to finish?
This was my first time animating anything to this complexity. I wanted to have something that looked somewhat rough and hand done and not all polished and computer perfect. This was going to require a lot of frame-by-frame animation. I picked ten frames a second to animate to because it was an easy number to time stuff to. I found out that no one does that and the animation standard is usually 12 or 24 frames per second. I was too deep in to go back and change everything. I was Googling and watching YouTube tutorials on what I wanted to do that day and learning what I was doing wrong or backwards the day before. I’d sketch out ideas and storyboard with pencil and paper, but for the most part I did all the final drawings in Photoshop. I also animated mostly in the Photoshop timeline keeping each scene a separate file. I was able to chop those together and do camera pans in Premiere.

There are rad mini sequences of events within the video—spider, dragon attack, pinball, underwater. Do you have a favorite sequence?
I actually enjoyed animating transitions between scenes the most, like when the fullpipe warps into the pouring beer. They probably go the most unnoticed, but it’s fun to come up with creative ways to take the viewer from scene to scene. If I had to pick a favorite actual scene it would be the kickflip through the dragon’s head and Slashy getting covered in dragon slime. I had gotten more comfortable at animating when I did this so it wasn’t as much of a grind as the earlier frames. 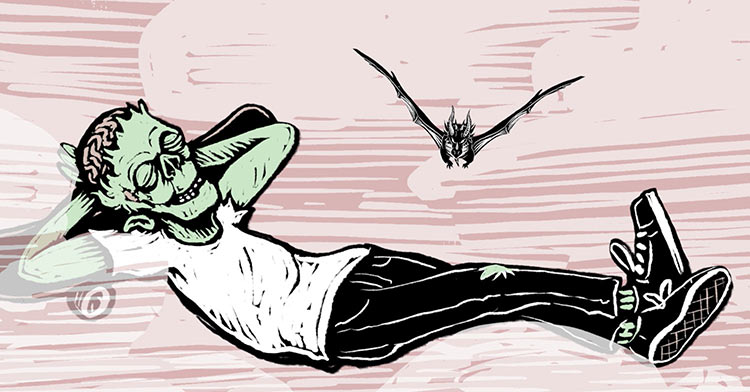 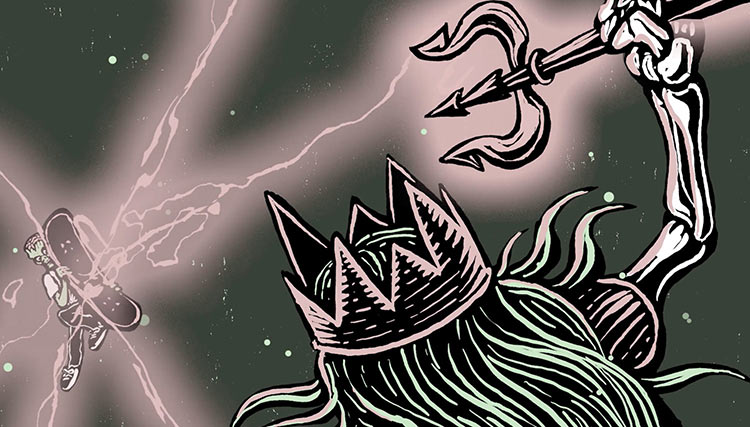 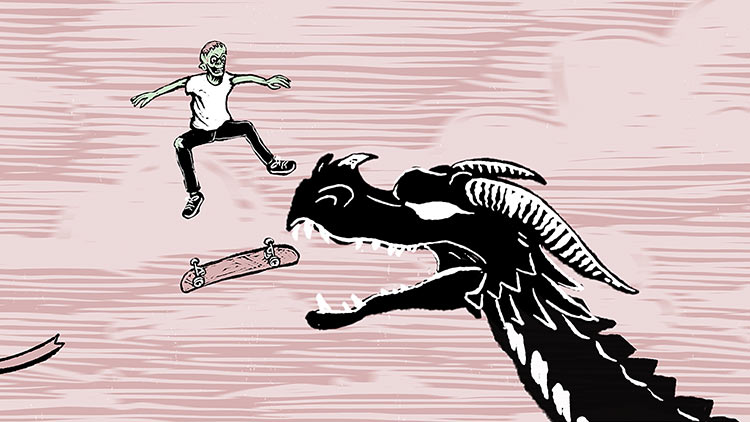 On the first viewing, the video is kind of a chaotic hallucination. But on the second view, you can tell there’s more of a cohesive storyline. Was there any deep philosophy to the storyline, or were you just trying to animate some cool shit?
In the notes from Slashers they wrote, “Think of each scene as a different level in a video game and each enemy character as a level boss.” That stuck with me in coming up with the storyline. The opening scene shows a cocky, half-drunk Slashy riding up to attempt the 5 Mile Grind, thinking it’s going to be a piece of cake. The whole thing is sort of satire of a wasted night out on the town from the perspective of the intoxicated person. In this case, Slashy thinking he’s the shit for defeating all these bosses while continuing to partake in smoking the spider and tripping on dragon guts. At the end we see him passed out at the same starting point, leaving us to wonder what actually happened? Did they really win? Did he just fall asleep and none of that even happened?

The body movements of the main character are really spot-on. Did you use a human model at times?
It was a lot of me standing in my living room acting out the movements. I didn’t need a ton of visuals, but more had to make the same movements to understand it. At the end where Slashy faints, I tried to do that without a model and could not make it look right. I ended up using my girlfriend as a model. Instead of actually falling back, I had her lay still on her back and moved the camera around her. I also used video reference to do the hand playing guitar.

Those fullpipe carves definitely look like they were inspired by actual footage. Who was that?
I’m not sure exactly who it was but I referenced the footage at Baldy from Grosso’s Love Letters to fullpipes. It’s around the 00:48 mark. 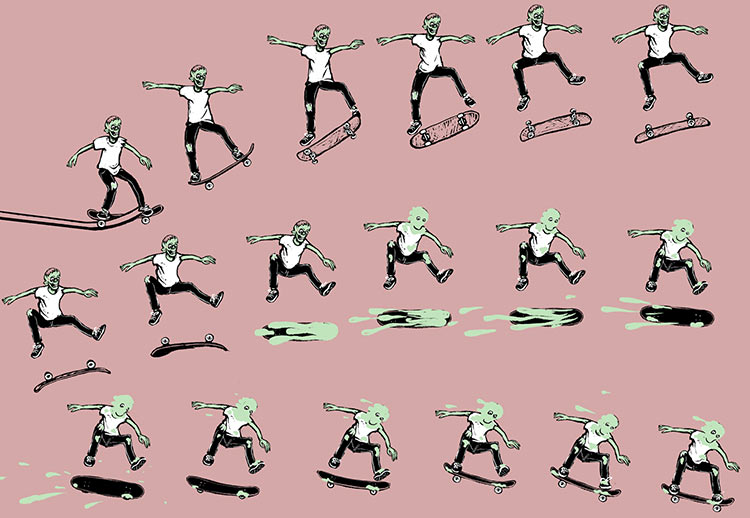 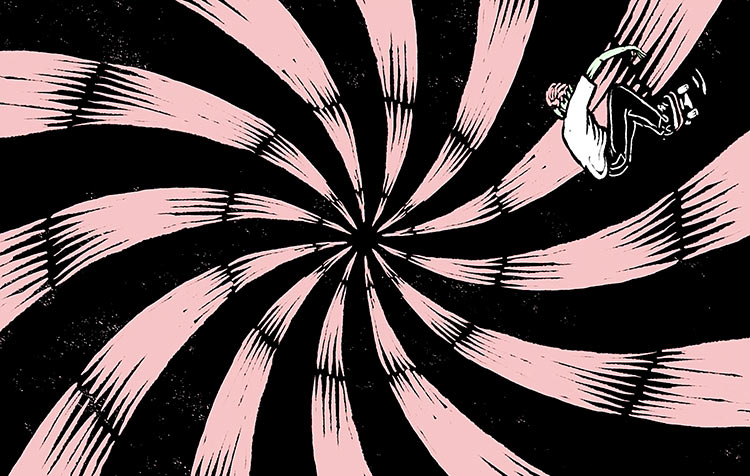 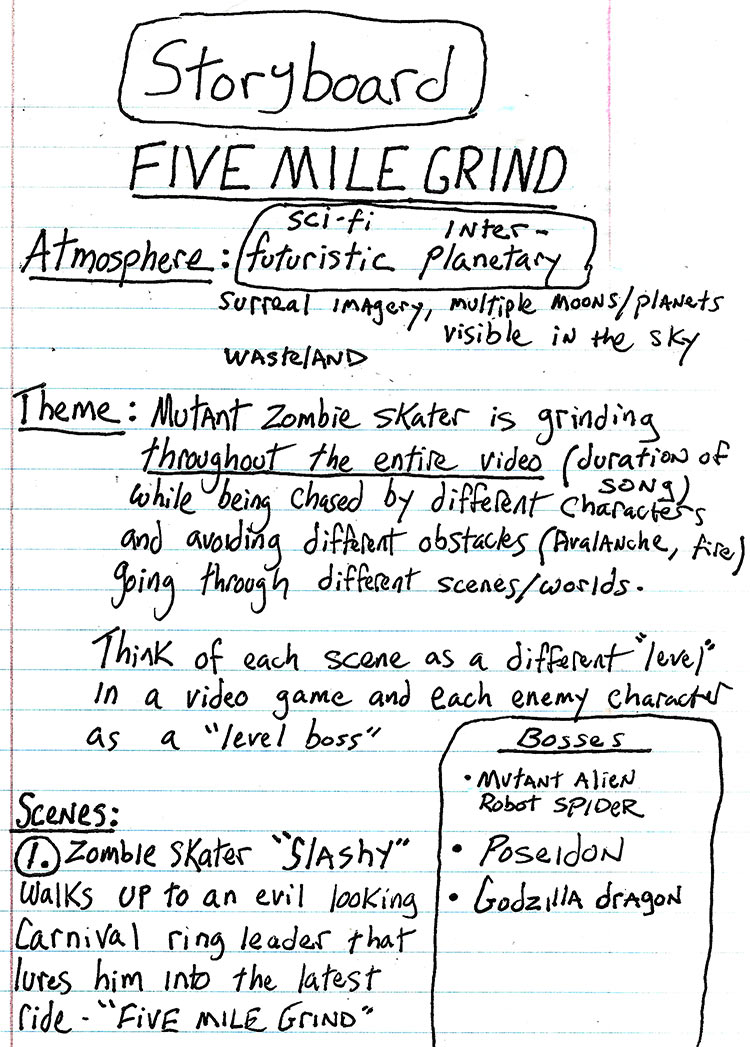 A few years ago we posted excerpts from your “See Spot Shred” dog-art book. It became a crazy viral phenomenon. Even grandmas and aunties were sharing that article. What was your overall experience with self-publishing that book?
That’s one of my proudest accomplishments. I was blown away by the response it got. It has gotten me a little more noticed as an illustrator and brought in some fun jobs. I find the best jobs always come personal projects. When it’s something you love and you’re in charge of all the decisions, you’ll almost always put in your best work.

What are you up to now and what are your plans for the future?
I’m wrapping up the process of self-publishing my second book. It’s a different path than skateboarding dogs or animated zombies. This book is a collection of prints and drawings of classic country singers illustrated as animals based on playful puns of their names—Waylon and Willie illustrated as a whale and woolly mammoth for example. Over the next month I’m getting the books produced and hand printing and making all the packaging, hopefully to be available November 1st. I’ve been working a ton, but I think it should be slowing down. Hope to get out there and skate more in that beautiful NYC fall weather. 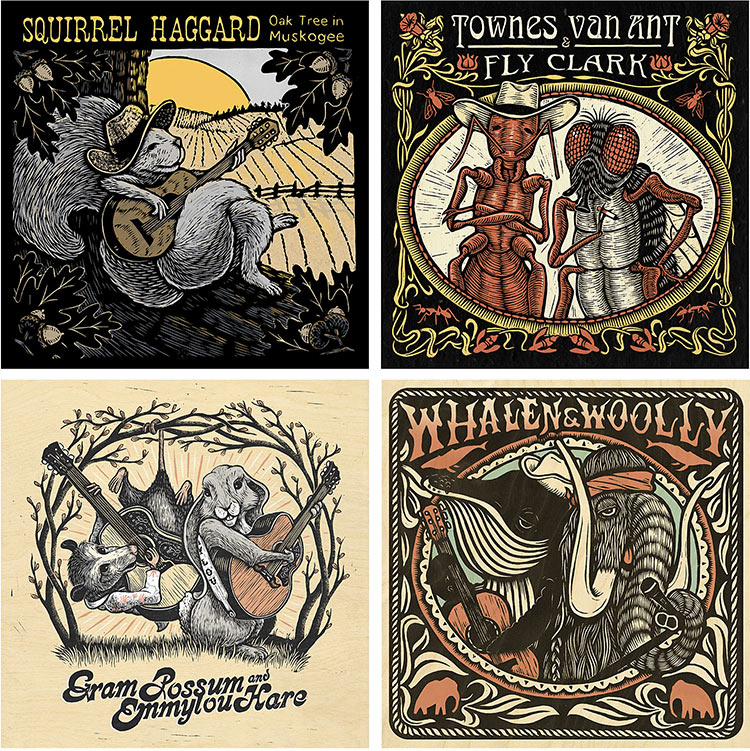 Shane Medanich (above, far left) is the drummer for Slashers, a founding member of the legendary SF band Hightower, a ripping skater and a long-time friend of the mag. We asked him some quick questions about this video project.

Shane, you’ve been in both Thrasher’s Photograffiti and Zounds departments, your music has been in Thrasher vids and your band Hightower ruled San Francisco for a long time. Describe Slashers and what you’re up to now.
Slashers only exists because we are all skateboarders. We just continue to use the classic Skate Rock blueprint that Thrasher laid out in the '80s: skate, play music and hit the road with your friends.

Did you work closely with Dylan on ideas?
We knew we wanted a fully animated video and we knew we wanted Dylan to do it. Dylan had 110 percent of our confidence and it turned out cooler, radder and better than we ever imagined. It was his first go at animation, too!

There are rad mini sequences of events within the video. Do you have a favorite sequence?
Man, they are all so good. I think the pinball and kickflipping through the dragon’s head is tight. All of it really.

What does “5 Mile Grind” mean to you?
Imagine grinding for five miles.

What was the recording process like for the album and that song in particular?
Standard procedure: we did everything live, nailed the drums and bass for every track the first day then different days for guitar over dubs and vocals, another couple days for mixing. We recorded it in Long Island City with our friend Ryan Douglas Jones. He’s a wizard.

What are your plans for the future?
We will keep playing and writing. Hightower will sprout up for a live show in a random city at a random time.

Any last words?
Spend time with your friends and family. Skate and play music for the ones who can’t. Thrasher for life. 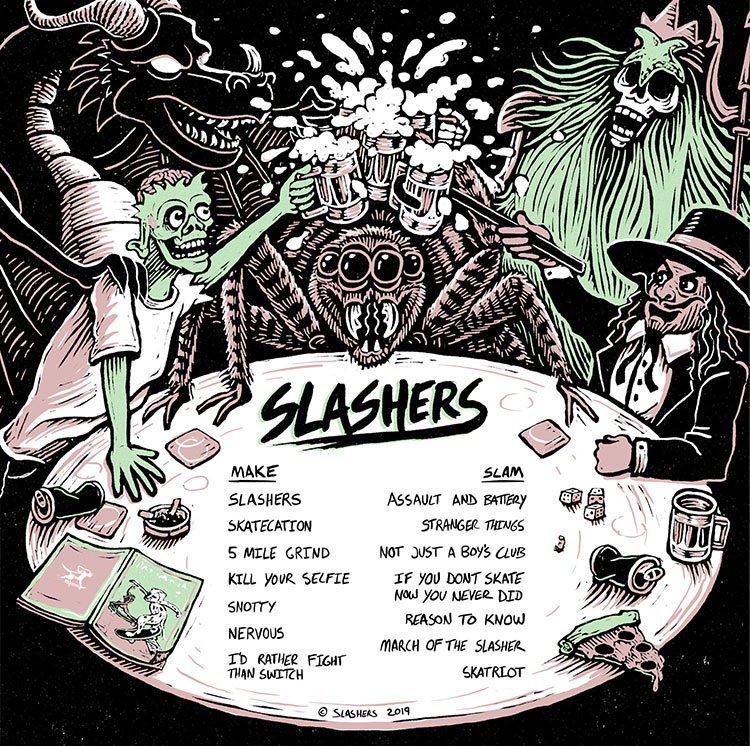