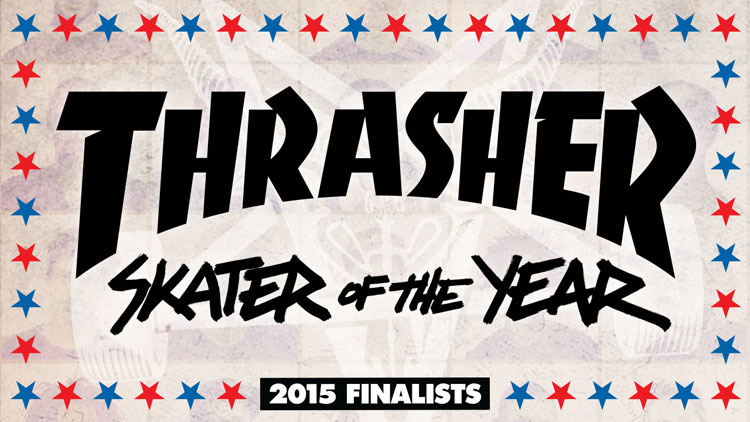 We'll be announcing the 2015 Skater of the Year very soon, but until then check out our top 13 finalists and let us know who YOU think should take the only award that matters. Congratulations to all our SOTY contenders (and anyone else who busted out and/or got broke the fuck off in 2015.) Skateboarding is it's own reward, but thanks for keeping it amazing! 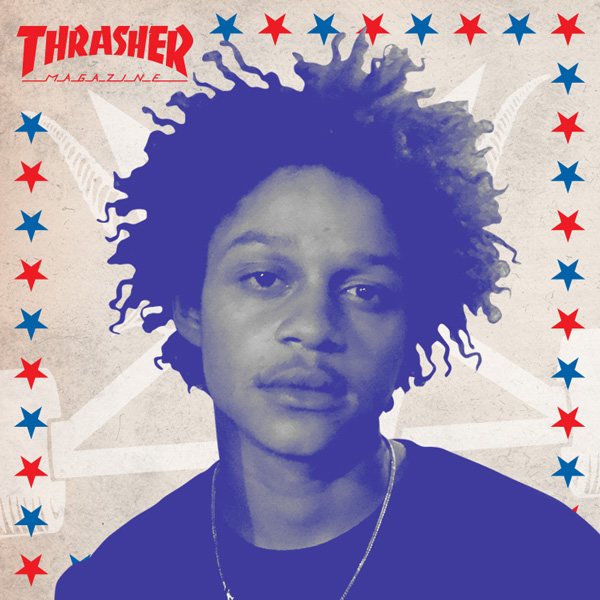 Kevin Bradley
Age: 20
Sponsors: Fucking Awesome, Nike, Supreme, Spitfire, Thunder, Hardies
Home: Los Angeles, CA
Big Moves in 2015: Supreme's Sickness saw Yung Kev getting a piece of some heavy Bay Area real estate including NBDs at Clipper and the Oakland courthouse straight into a signature board on FA. His fashion-forward part in Chronicles 3 (camo overalls anyone?) is sure to keep the kids clamoring. Must be nice to be KB!
Indelible image: That back tail – the year's best cover that wasn't 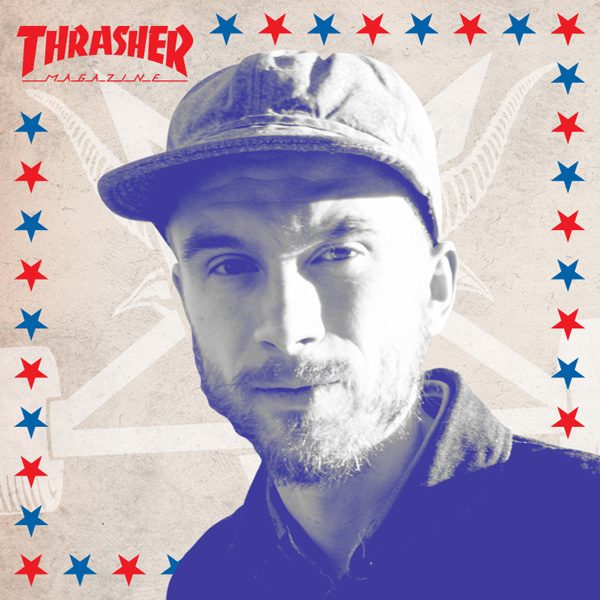 Gilbert Crockett
Age: 26
Sponsors: Quasi, Vans, Independent, Spitfire, Venue
Home: Richmond, VA
Big Moves in 2015: Skating up more often than down, Gil's explosive pop and eye for impossible terrain made his Propeller part (and excellent Raw Files) a veritable master's class in classic street taken to the limits. His follow up Salt Life video for Quasi picked up where the East Coast legends left off – huge moves on imperfect obstacles – street to the max. His interview in the mag was one of the most quoted (though he still won't tell us his playlist.) He got a shoe on Vans, too!
Indelible image: 50-50 to 50-50 the back of two bus benches
Download Vans' Propeller from the iTunes store here. 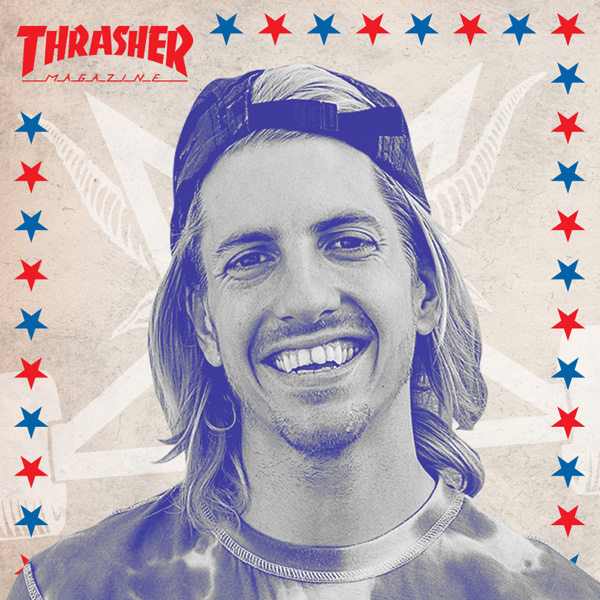 Jaws Homoki
Age: 25
Sponsors: Birdhouse, Fred Water, AYC, Bones, Independent, Neff, FP insoles, Raw Superfoods, Bronson
Home: Phoenix, AZ
Big Moves in 2015: Skateboarding's premier showman Criddled on the roof before taking it over the top of Clipper with that atomic kickflip melon. Plus a thousand other heart-stopping drops and 540 variations every other day of 2015, as is his style.
Indelible image: Clipper clipped! 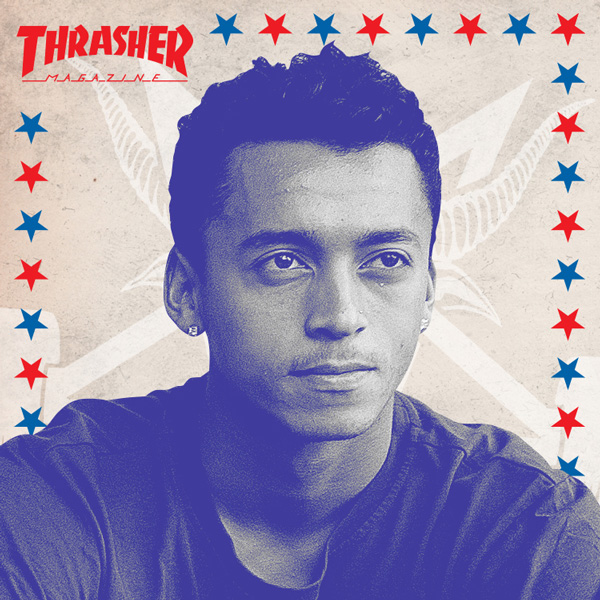 Nyjah Huston
Age: 21
Sponsors: Element, Stance, Monster, Ricta, Mob, Diamond, Bones Swiss
Home: San Juan Capistrano, CA
Big Moves in 2015: As if winning most of the contests weren't enough, 'Jah dropped his surprise OMFG part packed with more hectic rails and NBDs than most dudes score in a lifetime. Nollie heel noseblunt slide, crooks nollie inward heel, 180 nose grind nollie heel, fakie ollie switch over crooks??? What would you call it? And we heard he may be getting an exciting new sponsor, too.
Indelible image: World's record backside 5-0 in Hawaii 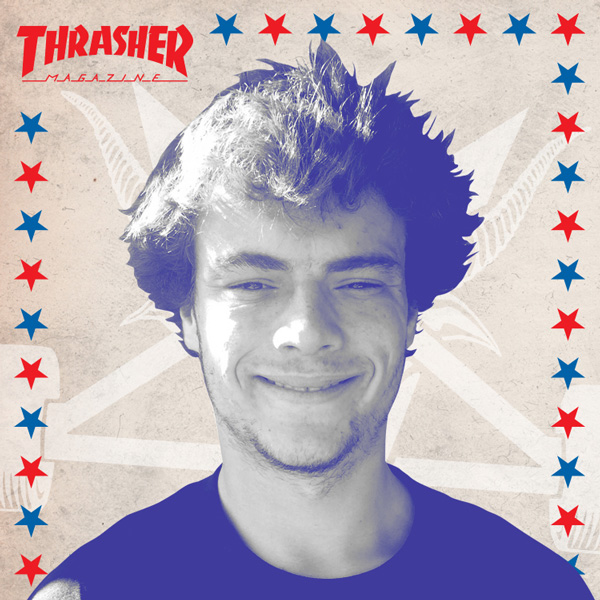 Chris Joslin
Age: 19
Sponsors: Plan B, Etnies, Fred Water, Grizzly, Venture, Bones, Active, Arnette, Idea 562, OC Ramps, Knox
Home: Hawaiian Gardens, CA
Big Moves in 2015: Turned pro for Plan B, filmed a video part in 12 days in China, tossed the ghetto bird and inward heel down Wallenberg and established himself as a social media juggernaut with his prodigious daily output of Insta-gnar – all without the aid of anterior cruciate ligaments.  Jesus, Joslin!
Indelible image: Flying through the air, with the greatest of ease. 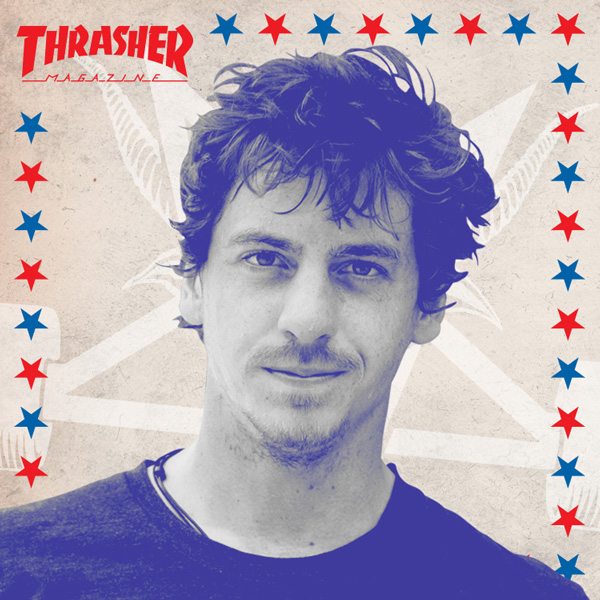 Cory Kennedy
Age: 25
Sponsors: Girl, Nike, Fourstar, Royal, Spitfire, Gnarhunters, Glassy, Bones Swiss, Fish Co.
Home: Vashon, WA
Big Moves in 2015: Went to Hawaii and came back with a shoe – you know, the one with the toe thing. Other than that, Cory was cruising in his own special way, Ubering to Nobu and working towards this Chronicles 3 project; though it's hard to call it "working" when you're having as much fun as CK1.
Indelible image: Dancing on curbs, laughing. 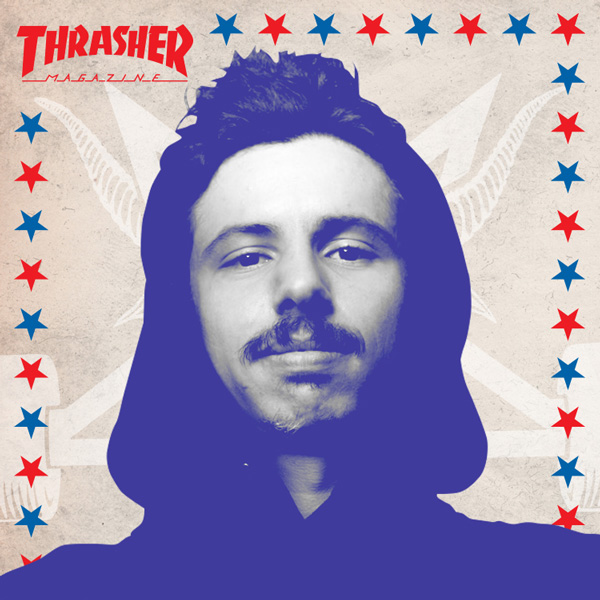 Luan Oliveira
Age: 25
Sponsors: Flip, Nike, Independent, Medlyn 13, Diamond, Oakley, Matriz skate shop
Home: Porto Alegre, Brazil
Big Moves in 2015: Luan made the top of the podium on the contest circuit but it was his lightning-fast feet, always perfect, bounding down the streets of Brazil in his recent Mic Check part that really rallied the fans.
Indelible image: That 'stache, dog! 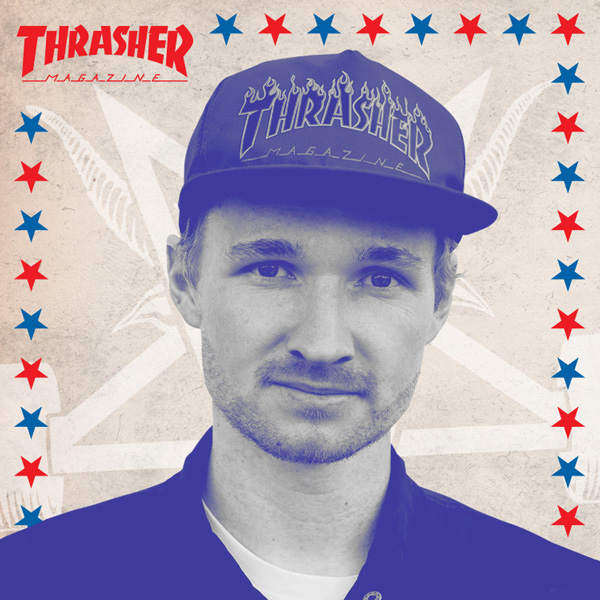 Shane O'Neill
Age: 25
Sponsors: Primitive, Nike, Thunder, Spitfire, Diamond, Grizzly, Monster, Glassy, FKD
Home: Los Angeles, CA
Big Moves in 2015: Started the year with our most-viewed video, the NBD-packed Shane Goes, then popped back up in SF to follow his Wallenberg backside nollie heel with a quick Clipper biggie back tail. Then there's this magical Welcome to Primitive flick (and his brain-busting switch kicky BS NBS cover,) to consider. Add to that a new baby girl and 2015 has gotta be the best year of Nugget's life.
Indelible image: Switch double 360 flip Santa Monica Triple set! Who does that?! 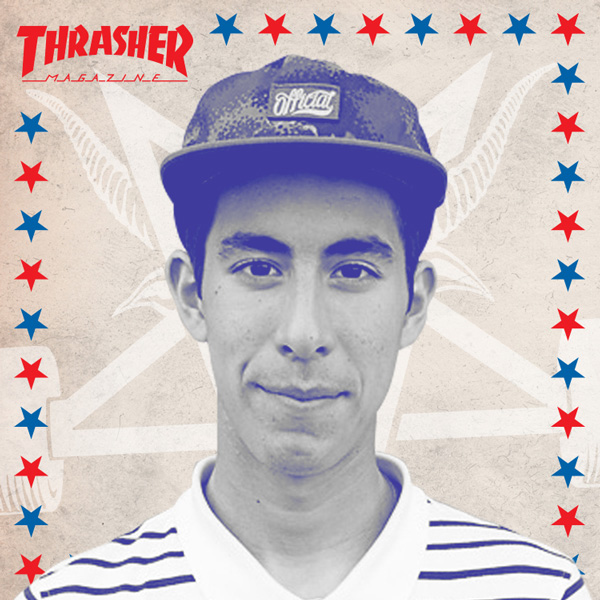 Miles Silvas
Age: 20
Sponsors: adidas, Thunder, LRG, Wayward Wheels, Mob, Official, PLA skate shop
Home: Sacramento, CA
Big Moves in 2015: You knew he was good, but LRG's 1947 video and his second Stanford cover made it extra official. Early reports from his work on adidas' Away Days – including a heart-stopping back tail at Le Dome (as seen in the mag,) suggest we ain't seen nothin' from this PLAboy yet.
Indelible image: Switch back smith, cover #2.
Download LRG's 1947 from the iTunes store here. 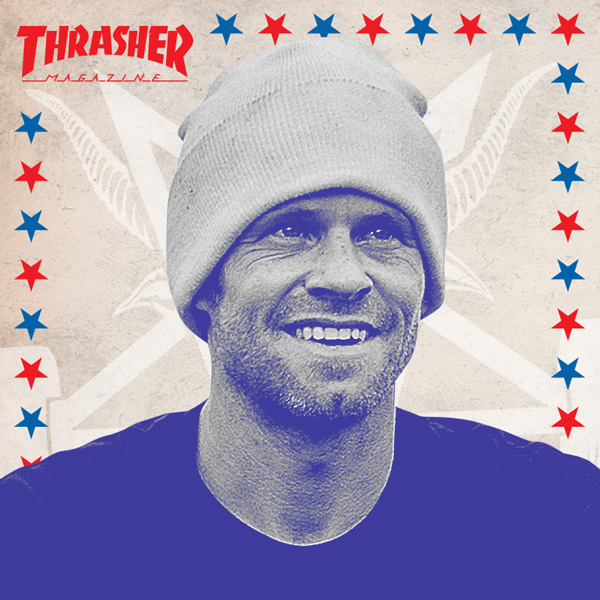 Age: 37
Sponsors: Fucking Awesome, Vans, Independent, Spitfire
Home: Los Angeles, CA
Big Moves in 2015: Tricks are for kids, AVE does maneuvers. His Propeller part and subsequent Raw Files captured a legend getting down to serious work – classic skateboarding with a progressive edge, done full fuckin' blast. Got the cover of the mag going switch OTB and wasn't afraid to actually say something in his interview. Stores can't keep his FA boards in stock and from the clips we've seen in Fight/Fuck, Sickness and Boys of Summer, "taking it easy" isn't in AVE's vocabulary.
Indelible image: Switch 50-50 on the bank to blue bar 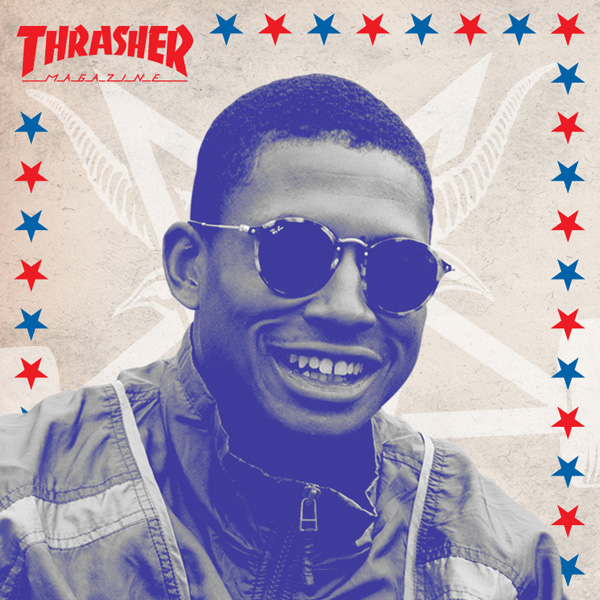 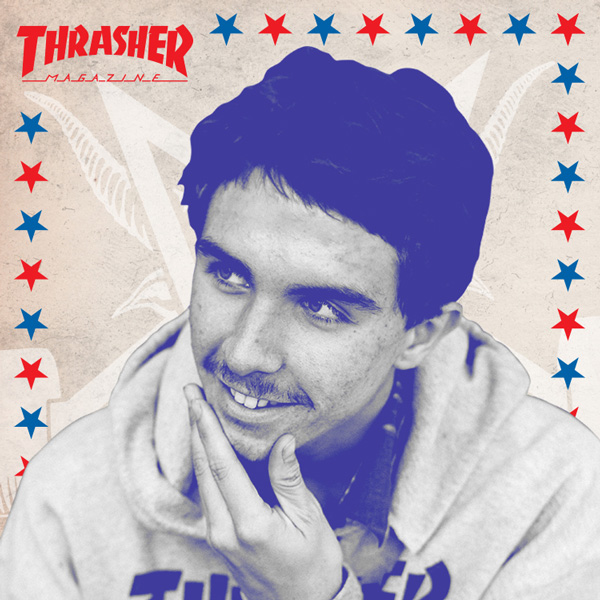 Kyle Walker
Age: 21
Sponsors: Real, Vans, Volcom, Thunder, Spitfire, Active, Happy Hour
Home: Los Angeles, CA and Oklahoma City, OK
Big Moves in 2015: If K Walk's 50-50 in OKC wasn't one of the longest handrail grinds of all time, maybe his 100-meter feeble in Belgium was. Kyle's Propeller part was jam packed with amazing moves, all done with his precise, featherlight style. Bounced back from getting hit by a car (don't ask!) to turn pro for Real and treat his bros to the Most Push-Ups Tour. And now he's straight into blowing minds for this Volcom vid.
Indelible image:The grind that goes on forever!
Download Vans' Propeller from the iTunes store here.

More:
REAL's "Through and Through" Video
"The Most Push-Up Dudes" Video
Magnified: Kyle Walker
Hall of Meat: Kyle Walker 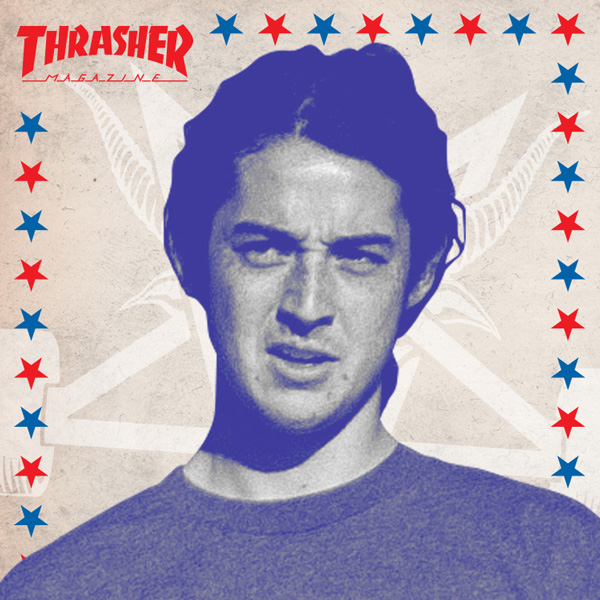 Rowan Zorilla
Age: 20
Sponsors: Baker, Vans, Independent, Spitfire, Modus, Gnarhunters, Happy Hour
Home: Vista, CA
Big Moves in 2015: Got the front of Propeller and two Thrasher covers in 2015 – not bad for a kid unknown outside of the Shep Dawg crew just a couple years ago. Rowan's sweet, sleepy style coupled with dangerous moves and all terrain abilities made him a standout in one of the most hotly-anticipated videos of the modern era. Fool can party, too.
Indelible image: second-story kickflip, corner pocket
Download Vans' Propeller from the iTunes store here.